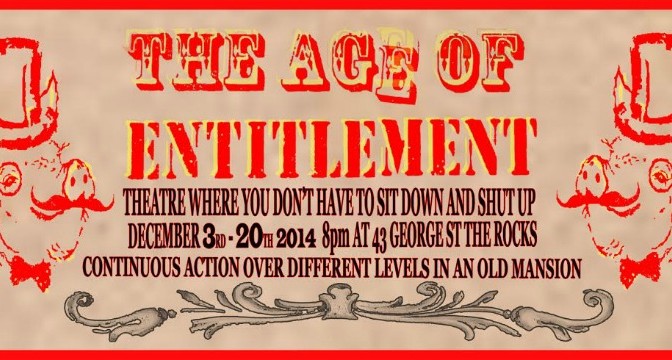 I don’t want to give anything away about THE AGE OF ENTITLEMENT but there is a huge amount I want to say. It is so unique and layered that I want to provide you with a fulsome discussion about the show and what to expect. But any descriptors might accidentally give the game away. Perhaps… working on the assumption that a review is about 250 words long, I could repeat the phrase, “You really, really have to see this show!” 31.25 times.

I’m not sure that will wash with the Editor. So here we go on a journey of vagueness.

The show is playing in an historic mansion, Merchant’s House, in the Rocks. Fine so far, I can say that. It is part of the Rocks’ Village Bizarre Festival 2014 and the Rocks’ Pop-Up Project whose initiative is to activate and re-imagine vacant spaces throughout Sydney. That’s OK too because I nicked it from the program.

Two levels of the mansion are used. All at the same time and the rooms are filled with 20 ethnically diverse characters, each focused on their own story, and you can follow whoever you like. You can be observer or participant, no audience humiliation involved. Yep, also good, that’s in the advertising and on the website.

Change of tack now. Here’s some advice for when you see the show. And you really, really have to see the show. See what I did there?

Firstly don’t read the program as you are waiting on the pavement to be admitted to the imposing building. The program has clues in it but there’s much more fun to be had in experiencing the characters and settings in order to divine or intuit what is going on. Unless you are a theatregoer who likes structure and form in their viewing. Then, boy are you at the wrong event!

Secondly, when you are encouraged into the venue, don’t be seduced by the first door you see. Move further forward or up the stairs. There is stuff happening everywhere. I must have made about 10 trips up and down over the 90 minutes. I was drawn by noise happening somewhere. Then I was distracted by a side room where a chanteuse in a killer period dress was complaining about not having dinner. Then I wanted to see what had happened to Eleanor or Harmony and how Lara and her boyfriend, Jim were making out. That friend of his, Paul really is useless. Note to self: stop!

Lastly, take time to enjoy the clever costumes and the complexities of the set and props design. designed by Jo Parkin and Shane  Robertson. Everything means something in this world and there are small items above your head and at your feet to extend your understanding of what is going on. The costumes and hair, cleverly designed by Alex PF Jackson (assistant Kimberley Hart), not only acknowledge a time out of joint with the themes and voice of the dialogue but the hair has huge significance. I only added this bit because my companion thought I was really clever working that out.

Nope, I’ve gone too far. That’s it. I’m done. Time to stop before I blurt out too much.

THE AGE OF ENTITLEMENT by Mongrel Mouth is playing at Merchant’s House, 43-45 George St, The Rocks Wednesday-Saturday 8pm until 20th December.

And you really, really have to see this show. No seriously, you really do.

For more about Age of Entitlement, visit http://mongrelmouth.com/the-age-of-entitlement/

2 thoughts on “The Age of Entitlement @ Merchant’s House”