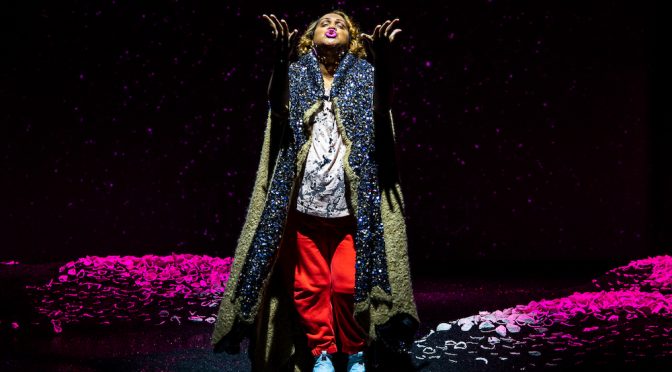 This play starts, appropriately enough, with a smoking ceremony and a funeral. A much-loved grandmother has passed and her granddaughter feels her loss, but also needs to celebrate her life, her stories and her culture.

The granddaughter, known only as Woman, is played by Elaine Crombie and as THE 7 STAGES OF GRIEVING unfolds, she will be the woman who laughs, rages, cries, remembers and grieves for the loss, not just of a matriarch, but of the stories and knowledge she took with her – and for the loss of their land, a loss of recognition and the ongoing losses of the stolen generations.

Crombie takes on a number of different personas throughout the show and in each she is outstanding. Her warmth and charisma engage from the beginning. It is a tribute to her skill and personality to have enthusiastic audience participation in a ‘Delta Dawn’ singalong near the beginning of the play, before she moves on to the darker stories she needs to tell the inhabitants of the land now called Australia. Stories she needs us to hear.

Woman tells us about all sorts of people. The old Aunty who attends as many funerals as she can because you never know – she never knows – whether she might be mourning her lost, stolen relatives.

She tells us stories to make us laugh, and to make us think. About how Woman wakes up every day to find she is still black and how the colour of her skin makes her proud, but how it attracts police attention and scares off taxi drivers. Not quite so funny now.

These and other vignettes are told on a brightly lit stage, on which there are several shell-covered middens, one of which is grandma’s grave. The sound production, by composer and sound designer Steve Francis, is evocative and moving but not prescriptive, a perfect complement to what is happening on stage. The walls, floor and ceiling of Elizabeth Gadsby’s set are black, but glittery – a little light in the darkness, perhaps.

Everyone has to die, says Woman. Everyone. She takes comfort in that, and names a few people she’d like to see dead. Mainly politicians, the usual suspects. It gets a huge laugh. Except that it’s not so funny either, given that since this play was first performed in 1995, not much has changed.

Pivoting from Elisabeth Kubler-Ross’s seven stages of grief, the seven stages of the play’s title are phases of Indigenous history: Dreaming, Invasion, Genocide, Protection, Assimilation, Self-Determination and Reconciliation. With the co-operation of writers Wesley Enoch and Deborah Mailman, director Shari Sebbens has updated and added to the original script. In the years since 1995, there has been cause for hope. In 2000, more than 300,000 non-Indigenous and Indigenous people crossed the Sydney Harbour Bridge together in support of reconciliation. Back then, the walk was seen as a new beginning and a turning-point for the nation. In 2008, then Prime Minister Kevin Rudd made a formal apology for the “profound grief, suffering and loss [inflicted] on our fellow Australians”.

A huge SORRY sign lights up the stage. Crombie smiles at it. Underneath, reads the protest line “Sorry means you don’t do it again”.

Which leads back to 1993 and 18-year-old Daniel Yock’s death in police custody. Crombie’s acting range is phenomenal, flashing from comedy to pathos in a heartbeat. She tells Yock’s story with all the sorrow, rage and pain it deserves. And she tells it in detail, it is personal. We feel it. Here was a young man, not a statistic. Behind her, dates flash up on the screen, one by one, marking hundreds of Aboriginal deaths in custody. When she is finished, the screen is full. Many of those deaths were this year.

As Sebbens concedes, “the sad and immediate reason this play is still relevant is because nothing has really changed… but we can hope that people relate to our experiences and find the inspiration for change in our humanity”.

On stage, as the play concludes, Crombie insists: “We cannot go back.” It is a call to arms, for those who want to listen.

Terrific and important theatre, the STC’s THE 7 STAGES OF GRIEVING is playing at Wharf 1 Theatre until 19 June 2021.