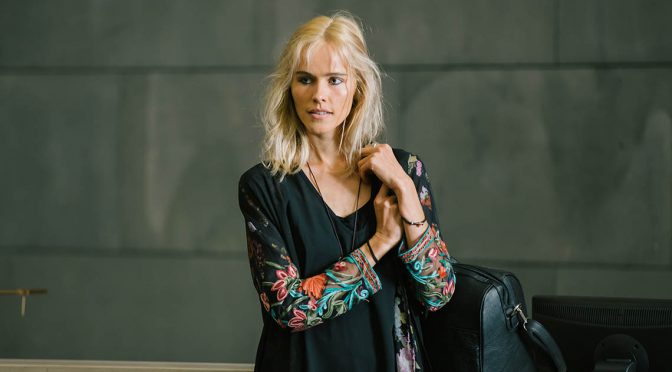 THAT’S NOT ME begins with the picture’s protagonist, Polly, sitting on the toilet clutching an air freshener and delivering an Oscar acceptance speech.

Polly is an aspiring actress, the twin sister of another aspiring actress, Amy. She is a serious minded thespian, biding her time for a shot at stardom working at a cinema selling tickets, popcorn and choc-tops.

When her agent suggests her for a role in the popular soap, Summer Street, she baulks at the idea of playing an albino, perceiving whitening up as repugnant as blacking up.

Amy takes the gig instead, is a success, lands a role in an HBO show and starts dating Jared Leto.

A disastrous trip to LA does little to help matters, but the unbearable situation becomes a little better when Polly discovers that she can use her sister’s celebrity to her advantage to get free clothes, free booze and casual sex.

There’s not a dud note in THAT’S NOT ME thanks to a solid foundation in a script by Alice Foulcher and Gregory Erdstein, and anchored by a winning lead performance by Foulcher and Helmed with an assured hand by Erdstein.

The support casting is impeccable with a mix of the well known and the unknown. Andrew S. Gilbert and Catherine Hill are perfect as Polly’s parents and Isabel Lucas is ferociously good as Polly’s drama school pal, Zoe, who has transplanted to Hollywood and deliciously pays out on the studio who has dissed her.

Andrew O’Keeffe serves up a sparkling cameo as a soap star and the director, Gregory Erdstein sends the self important director caricature into cauterised comic cuts.

Cinematography by Shelley Farthing-Dawe is first class as is the rich production design of Sally Addinsall.

What could have been cheesy has been kept bright and breezy in this very funny film of awkward ambition, shallow celebrity, sibling rivalry and playing the real.

DATES FOR THE DIARY: