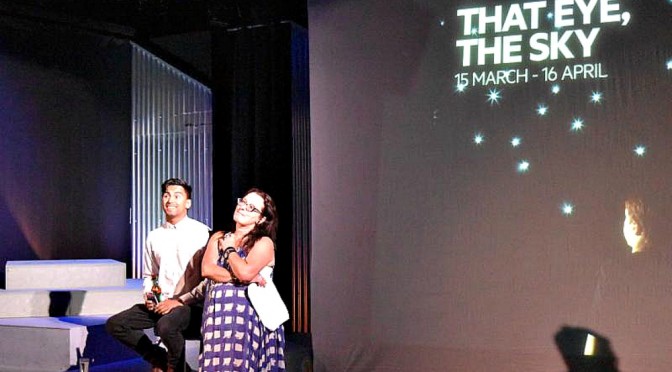 THAT EYE, THE SKY has been lovingly adapted from the Tim Winton novel and brought to the stage by Richard Roxburgh and Justin Monjo and directed by David Burrowes. It is beautifully, eloquently written and the show is extremely polished with an incredibly talented cast but the work is mostly cerebal and we feel distanced observers. The play asks the big questions about the nature of religion and the meaning of Life and Death.

Briefly the plot can be summarized as follows – in an outback Western Australian town young Ort Flack is struggling to come to terms with terrible changes in his world Long ago, his parents ‘dropped out’ to follow a hippie lifestyle. Now his father lies paralysed in a coma, his older sister is consumed by hate, his grandma exists in a fog of dementia and his once-carefree mother is now unable to cope. For Ort, the struggle to understand the world around him draws him towards faith and religion.

Full of optimism, yet lonely and frightened, loving unconditionally Ort becomes obsessed with the belief that somewhere ‘up there’ someone or something watches over them all, controlling their destiny, and that his father can be cured….Then one day a mysterious stranger suddenly appears and entrances them all leading to further massive changes.

This is a bleak yet intense production with at times almost a cold ,futuristic sci-fi feeling. There is an intriguing use of damaged grey twisted mannequins to represent characters who are both present yet absent The soundscape created by Hugo Smart and Dean Barry Revell pulses, throbs shatters and hums restlessly. Ben Brockman’s lighting is visually stunning and astonishing at times blinding and similar to strobe lighting. Tom Bannerman’s flexible giant grid set is part trellis, part fence, looking down on the action with a monitoring lightbox that can transform and become a boat among other things…

Control and focused energy are important in this show for example in the use of introspective pauses or the depiction of a traffic accident.
Joel Horwood’s portrayal of the main role of Ort who does not want to grow up is outstanding. While tall and grown he brings a wide eyed, questioning innocence to his character that is convincing and remarkable.

Ort’s mother and sister Alice and Tegwyn are marvelously played by Romney Stanton and Emma Wright,who almost look like twins and perform with delicate nuance and sensitivity in elegant yet understated characterization. As Alice, Stanton is wearily accepting of the drudgery of her life and she bravely tries to protect her family. Tegwyn is restless and wants out,something better and taunts and teases Warburton.

Hulking, rather scruffy Shaun Martindale energetically plays the pivotal role of Henry Warburton a born-again, travelling self-styled evangelist with a sinister hidden menace full of enigmatic danger and complexity. He leads Ort and his mother to baptism yet corrupts Ort’s sister.

The novel has been adapted into a thought provoking piece of ‘theatrical magic-realism‘ about Ort’s experiences of love, loss of faith and family full of humanity. It is also about the relationship with the land, the importance of caring, nurturing females and Christianity’s ability to conquer with salvation or destroy. Technically this is a terrific production with a splendid cast, terrific set,costumes and lighting effects though one felt a little emotionally distant.

THAT EYE THE SKY is playing the New Theatre, 542 King Street, Newtown until Saturday 16th April. Peformances are Thursdays to Saturdays at 7.30pm and Sundays at 5pm. Ticket price $17- $32.