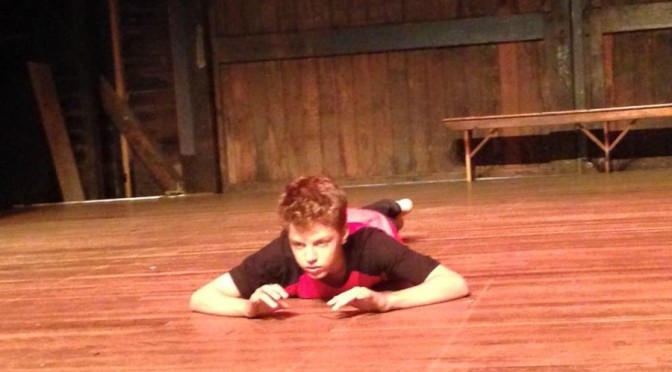 TECHNOLOGY FOR OLDIES eh? I’m an oldie and my oldest friend is an oldie so off we toddled to see what the whippersnappers could teach us. The Corrugated Iron show is on tour from Darwin and playing in association with the Australian Theatre for Young People in the ATYP space at Walsh Bay.

The performance was introduced by TFO Director Adam Blake, who gave us some idea of what the young cast had been up to during their visit to Sydney. Tours of STC and movement class at NIDA and planned events at the Opera House. Sounded tiring to me but as these exuberant young artists hit the stage , there was no sign of fatigue. They were confident and inspiring and what really surprised me … funny.

This show is really well crafted as is all the work of the ensemble. Bookending the busy 60 minutes is a series of scenes comparing the old and new ways of doing things. Events like meeting up with friends, bullying, getting a virus and dating. In the middle of the show there was a snappy stop- start section about dinner times… then and now. There was a clever movement sequence based around the ring of a mobile phone and a great ‘booty call’ dance.

Behind the development there must be a sure hand at work gently guiding the politics of this show. The bullying is about a sneaky nose pick not something really nasty. The males play females and visa versa and the gender issues are sweetly addressed. The use of Shakespearean pass- it- on swearing with effectively beeped modern swearing really got the point home too.

The style is ensemble in nature, though the text wisely gives us a sparky female guide through the various themes. This young woman is confident and engaging and speaks directly to the audience to let us know what is next.

Everyone in the company has high order performance expertise. They can look the audience in the eye then change scenes by turning to focus on each other. They can move with fluidity then freeze with considerable skill. All their movement is excellent group work yet each artist fits their character neatly into each narrative section.

There are scenes designed so that the audience has to concentrate on text, the dating scene for example. These are balanced with visually entertaining sequences such as the ensemble in full virus mode spookily encircling the computer only to fall to the floor with the closing of the laptop.

There is plenty of accessible comedy and it’s both subtle and broad. After a lovely group mime of a horse and cart, the throwaway line ‘bet that jogged a few memories’ just cracked me up. And I fell about when an actor with old man glasses staggered onto the stage calling “My pacemaker, my pacemaker… no wait it’s my mobile phone!”

Both of us really enjoyed the show and congratulations to both Corrugated Iron and ATYP for bring the show to our attention. I am now following them on Twitter. Take that!!

TECHNOLOGY FOR OLDIES played at the ATYP space from 8-11 April.

For more about TFO Technology for Oldies, visit http://www.atyp.com.au/tfo-technology-oldies