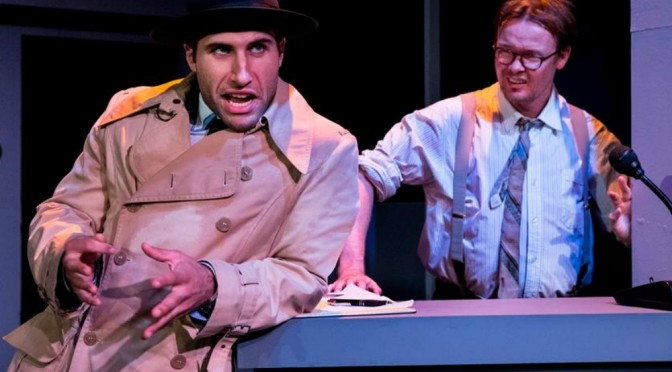 It’s giggles from the get go, for New Theatre’s retro production of Terence McNally’s THE RITZ, a run amok revolving door romp set in a gay sauna circa 1975.

Play opens with Old Man Vespucci, a minor Mafia don on his deathbed, calling for a hit on his son in law, Gaetano Proclo- now there’s a name to conjure! “Get Proclo!” decrees the Don, and by goodness, it’s bend over backwards to get the job done.

His son, Carmine, never fond of his sister’s spouse, is not slow to grant his dad’s deathbed wish, so Gaetano, in dreadful disguise, on the lam and risking life, limb and libido, instructs a cab driver to take him to a place nobody would dare dream look for him.

The taxi drops him at The Ritz, a gay bathhouse, where he is preyed upon by a lean louche  “chubby chaser”, Claude Perkins, who just happens to be an old army buddy of Gaetano. Of course, the bad wigging stops Perkins twigging his real identity, for a time.

Passing himself off as his brother in law, Carmine, Gaetano is befriended by Chris, an habitue of the establishment,  and to whom he confesses his predicament.

Meanwhile, a private dick named Brick, employed by Carmine to shop the joint, shows up, and the in-house entertainer, Googie Gomez, mistakes Gaetano as a Broadway producer.

Brick has never met Carmine or laid eyes on Gaetano, and falls for the ruse of Gaetano’s fake follicles.

The actors are infectious in their playing, passing on the contagion of comedy with a very fast and loose production under the gleeful direction of David Marshall-Martin.

Les Asmussen is a riot of reckless abandon as Gaetano,  a wig wrangling hand wringer with a wonderfully wicked, wide-eyed and wry sense of the ridiculous.

Samuel Christopher shines as Chris, the flamboyant queen, demonstrating nice comic timing with a patina of poignancy, the swinger yearning to settle.

Similarly talented in timing, torso and towel is pectorally splendid William Koutsoukis as the falsetto voiced and bicep flexing Brick.

Meagan Caratti as the indomitable Googie Gomez is a scene stealing show stopper who chews up the dialogue and the scenery and expectorates her English as second language malapropisms in quite the most delightful way.

Marty O’Neill’s Carmine is a strutting cock of maladjusted machismo, a duplicitous and hypocritical ball of rage, a shyster with an unhealthy regard for his sister.

The whole rollicking, frolicking fun fare is played out on Tom Bannerman’s serviceable multi level, colonnaded set replete with stairs, cabaret stage and spunks on and under bunks.

THE RITZ is a ribald romp of queen size camp with a chorus of torso and towel and a chap in chaps – a fondle of the funny bone and the nostalgia zone.

Terence McNally’s THE RITZ is playing the New Theatre, 542 King Street, Newtown until Saturday 5th March. Performances Tuesdays to Saturdays at 7.30pm and Sundays at 5pm. Final performance Saturday 5th March at 2pm. Ticket prices from $17 up to $32.