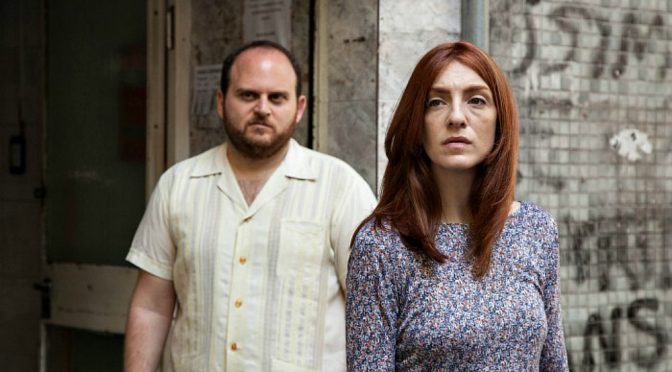 Over the years I have enjoyed both the Israeli and Jewish Film Festivals and I have never seen a bad Argentinian film. That optimistic critique hit a brick wall after viewing this film.

THE TENTH MAN tells the story of Ariel (Alan Sabbagh) an Argentinian economist, He is returning to his hometown Buenos Aires to introduce his dancer girlfriend to his father. She is supposed to follow Ariel a few days after his New York departure. Before he even leaves New York his father Ashek is making requests of Ariel on behalf of his friends. Upon his return to Once, the Jewish district of Buenos Aires, the requests multiply alarmingly. Ashek is a macher, a big shot in the district. He is like the Godfather but without the criminality and menace. He distributes food and pharmaceuticals to the impoverished jews of the ghetto who have a misguided sense of entitlement. Ariel is hoping to reconnect with his father who conveys his request by mobile phone leading Ariel to meet all sorts of eccentrics and misfits. All this is conducted in schmaltziness. This sounds charming and the publicity describes this is a Valentine by Burman to the district in which he was raised.

This film is not charming and the district rather than being warm and colourful is depicted in dim grays, washed out whites, and claustrophobic interiors. Burman either for budgetary constraints or perhaps as a devotee of cinema verite dispenses with decent lighting and a tripod such that much of the camera work is murky, jerky and haphazard. I also had difficulty with the subtitles which flashed onto the screen too quickly so I only saw about three quarters of the dialogue. Given what I saw and heard of that fraction, I didn’t miss anything in the remaining quarter.

It seemed to me that Burman thought that is he threw some kosher ingredients into the mix such as mikvahs (ritual baths). Tefillin (phylacteries), familiar liturgical yiddish and hebrew melodies and songs, and demanding schnorrers that this will create delight. How misguided he was. I was always hoping that the film would take off but it was charmless, hard to view, unengaging, lacked wit and humour, and above all was unentertaining.

What is particularly disappointing is that is if anybody could relate to this film the Buenos Aires jews like my father were polish galicanes (from Southern Poland). I had an Uncle Ashek, a lovely man, and members of my family experienced some of the elements of the storyline. I knew these people intimately. However the filmmakers script, cinematography and haphazard characterisation totally alienated, and the film didn’t even have a proper conclusion. In a word, disappointing.