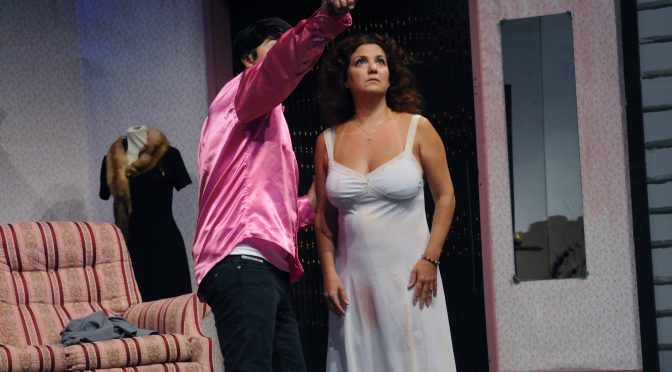 Tennessee Williams plays are always immersive  experiences as indeed THE ROSE TATTOO is.

This Williams play takes us deeply into the world of a tightly knit Sicilian community situated along the coast of Mexico, between New Orleans and Mobile.

We follow Serafina Delle Rose’s story. At the play’s start she is in a good place, a busy local dressmaker, pregnant, and a devoted wife to truck driver husband Rosario. Then the ‘slings and arrows of misfortune’ take a large slice of her when her husband dies in a truck accident. From the shock of ir all she loses her baby and basically goes into a shut down mode.

This ‘mode’ has repercussions for her 15 year old daughter Rosa who has a thing for sailor boy Jack. Panicking Serafina tries to keep her daughter at home  as much as possible.

The play then jumps ahead three years. Serafina still mopes around at home, in a funk, spending a lot of her time talking to the box that contains her husband’s ashes or alternatively asking the Virgin Mary for advice. Then one day a guy, Alvaro, another truckie, comes to her house waiting assistance, and it flicks a switch in  Serafina and she starts turning her life around…

Williams always had the knack of writing huge, memorable roles for women. Maria Micallef devours the role of Serafina, capturing all the  nuances of her Drama Queen character. My favourite scene takes place when she goes one up on her nosy neighbours by saying/waving goodbye to Alvaro with great flourish that is bound to attract their attention when, in fact, she has only got him to repark the car and sneak around the back way.

Phillip Chaffey performed well  as the warm, self effacing  Alvaro who charms her out of her funk. Maxine Solari impresses in the role of Serafina’s wilful daughter Rose as does Andrew Nicholls as her beau, Jack, a good  natured sailor who finds Rose’s romantic ardour more than a little difficult to contend with.

The remainder of the sizable cast were well occupied playing an assortment of people from the too tightly knit and strung Sicilian community.

I enjoyed this night in the theatre – particularly, for a change, Williams gentle satire, and the way that the vibrancy of this small Sicilian community was portrayed. What better recommendation can I make than this – I was taken into a very different world and enjoyed the adventure and the experience!

The Guild Theatre Rockdale is offering tickets for their thoroughly entertaining production of The Rose Tattoo: Buy 1, get 1 Free for their Wednesday performance on the 23rd August.

Simply quote the code ROSE when you call the Booking Office: 9521 6358. Tickets must be purchased in advance. Conditions apply.