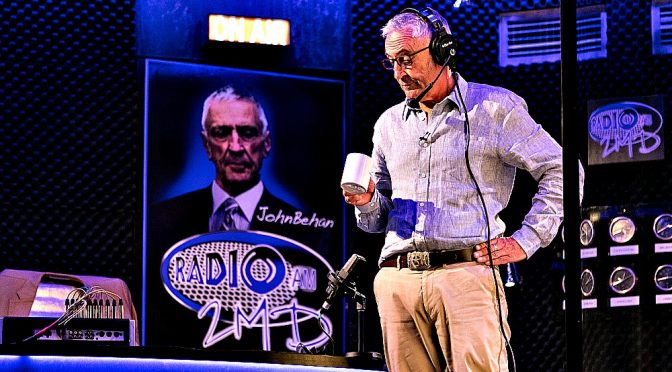 Biggins main character, radio shock jock John Behan, is anything but laid-back. Gung-ho and well irresponsible would be a much more apt description. On his radio program Behan has read out the criminal record of an alleged sex offender whose case was before the court. The police come knocking on his recording studio door, ready to arrest him for contempt of court. When his  producer advises him of the situation, he locks himself in his studio and continues broadcasting, ranting and revving up the community.

It is at this point that the play shifts between three worlds, very well achieved through Mark Thompson’s eye catching, detailed set design. The set is on two levels; up top is Behan’s radio studio and surrounds where the drama unfolds, below is split into two levels – stage right is an office of the national broadcaster, stage left is the editor’s office of a major newspaper.

Biggins keeps the pace moving very fast between the three worlds as the news breaks. The play runs for 100 minutes straight through,  and is a bit of an adrenaline rush.

We have John Waters acting acting obnoxiously as John Behan, the imperious emperor of the airwaves. Then we catch the cynical news print editor Julie Scott, played deliciously by Valerie Bader, constantly getting updates on the Behan story, and endeavouring to find the worst angle that she can find, that she can publish.

Then we move across to the action taking place with the national broadcaster as Taffy Campbell, a retiring broadcaster, well portrayed by Peter Kowitz, is in the process of handing over to keen young journo Danielle, nicely played by Paige Gardiner, fresh  out of college.  Taffy wants to take a restrained approach to the story, Paige wants to rush and break the story and make a name for herself.

The world that Biggins portrays is cynical and hardly pretty- the media is a machine which constantly needs to be feed….Social media is seen as being impulsive and, in its own  way, dangerous. In one of the play’s most striking moments, Danielle exclaims to Taffy, ‘This phone is my world!’.

What a sad state of affairs!

Biggins leaves us with plenty to think about with TALK which is playing at the Drama Theatre, Sydney Opera House until May 20.