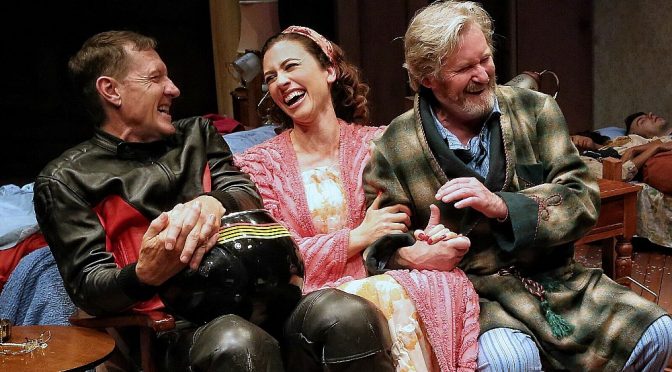 In 1979, award-winning British playwright, Sir Alan Ayckbourn, wrote TAKING STEPS, which he describes as “the only true farce I’ve ever written”.  In a decade where English humour was making huge waves, particularly in Australia, with ‘Monty Python’ and ‘Fawlty Towers’, TAKING STEPS has the same impact, offering eccentric, flawed characters and tantalising dialogue.

The play is set in an old, dilapidated Victorian mansion called The Pines.  It is reputedly a former bordello and said to be haunted by a deceased prostitute.  Enhancing the play’s farcical humour, the three storeys of the run-down house become one storey on stage.  Two sets of banisters mark two imaginary staircases on which the actors frantically or cautiously prance up and down.  It’s a wonderful theatrical technique by Ayckbourn and works beautifully.

Roland, a hard-drinking and slightly mad tycoon, (Peter Kowitz), is hoping to buy The Pines from local landlord and builder, Leslie Bainbridge, (Andrew Tighe), who arrives shortly after Roland’s tongue-tied and nervous solicitor, Tristram, (Drew Livingston).  Upstairs packing to leave her husband is Roland’s wife, Elizabeth, (Christa Nicola), a beautiful, neurotic, frustrated dancer – torn between the riches of her husband and her career.

Elizabeth’s brother, Mark, (Simon London) has something of the ‘upper-class twit’ about him, coupled with the ability to put to sleep whomever he is telling his life story to.  He collects his run-away fiancee, the neurotically-shy Kitty, (Emma Harvey), from the station and brings her home.

What ensues in all three rooms onstage is hilarious.  The brilliant one-liners keep flowing and the story grows with delicious entanglement, leaving the audience elated.

Mark Kilmurry’s direction is superb.  The comedy timing is ripe and character interaction takes place at a lightning speed.  The staircase-running and ballet moments have been enriched by choreographer, Katie Fitchett.

Anna Gardiner has done a sterling job with the challenging set design.  Ayckbourn stipulated that TAKING STEPS be done in a theatre in-the-round, so the set works well at the Ensemble.  Scott Allan’s lighting also enhances the storyline and atmosphere.

What really makes TAKING STEPS not only a good show, but a great show, is the cast.  All six actors bring eccentricity to their characterisations, making the most of the humour in the play.  Drew Livingston, in particular, has created an unforgettable character in Tristram, said by Ayckbourn to be the central character.  His vulnerability and nervous disposition draw empathy from the audience and his body language is very funny.

TAKING STEPS is a play you should not miss.  It is thoroughly enjoyable. It plays at the Ensemble Theatre in Kirribilli until Saturday January 13th, 2018.