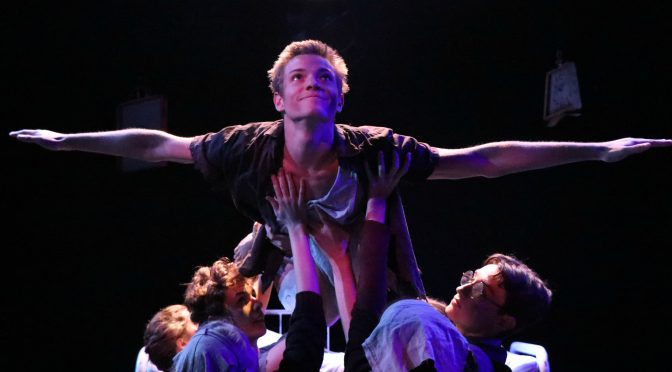 Bearfoot Theatre is a another new theatre company in association with Eclectic Productions that has a focus on producing original works. Riley McLean, creator of the CONDA nominated original play Do Your Parents Know You’re Straight? has written a new dark twist on the tale of Peter and the Lost Boys, featuring Tom Rodgers as Peter and Savannah Geddes as Wendy.

TAKE ME TO NEVERLAND takes J.M Barrie’s novel and uses it to explore mental illness. The show, directed by Riley McLean and Cassie Hamilton with Assistant Director Genevieve Lawson, is essentially two stories that run parallel to each other; Peter’s present (as a young man in a mental institution) and his past (as a young boy in an orphanage).

Trapped in an institution and unable to fly, Peter struggles to distinguish between real and make-believe. How will he find his way back to Neverland and how will the children in the orphanage learn to grow-up when Peter wants them to stay young and lost forever?

“I always saw a depth to Peter that went so far beyond the surface – despite everything he claimed to be, Peter is just a broken little boy without a mother – without love.”

Tom Rodgers is a gifted young actor with an extensive emotional range who imbues every moment of Peter Pan with completely believable complexity. He is ably supported by a sadly loveable troupe of Lost Boys/orphans, who also morph into a chorus as the sinister crocodile of doubt.

The orphans, naturally are fixated on mothers and the loss of them and the whether they had been loved, lost or given away. Peter appoints himself Captain of the gang, gives them all Lost Boy names such as Tootles (Harry Lyddiard) Curly (Sam Hawkins), Nibs (Konstanze Koedam) and Twins (Bonnie McPeak and Taylor Reece) and expects them all to follow him in his belief in Neverland and the ability to fly. They also have to fight “the pirates”, those who don’t believe.

However there is one disbeliever amongst them. Simon (Grace Alston), nicknamed Slightly, who maintains a quiet, brooding powder keg objectivity that serves as contrast to Peter’s flights of fancy and the childishness of the other children in the South Kensington orphanage. He is also the catalyst for upheaval and horror.

It takes a while to recognise the shift in time frames from orphan to young institutionalised adult Peter. The scenes between Peter and Wendy Darling,  presumably a therapist, are confusing at times, as the Wendy role appears to lack maturity and adult professional judgment. She came across as another child in Peter’s fantasy world, giving him kisses and calling them thimbles. We needed the duplicitous acknowledgement of that character “playing a part” for Peter for clarity in that aspect of the narrative.

The production qualities were high with multiple CONDA recipient, Lyndon Buckley as Technical Coordinator providing subtle transitions between past and present, creating a surreal and sometimes threatening atmosphere of dread. Tinkerbell is a single suspended light bulb that flickers and buzzes. This is further supported by Riley’s sound design of ticking clocks and some well-chosen pieces of music.

Also, the simple set design by Riley of a bunk bed set and some odd shaped clocks is highly effective and refreshingly simple. It’s a wonderful example of less is more in theatre, providing levels and plenty of playful opportunities throughout the 90 minutes of the production.

As an emerging artist, Riley demonstrates a bravery, sophistication and awareness of theatre that is mature and intelligent. The extrapolation of the Peter Pan story to explore trauma and mental illness is inspired and the construct is sound. At 90 minutes, the current script is overlong in development of plot and tends to lose dynamic at times, particularly in the scenes between Wendy and Peter. However, it’s a cracking idea with excellent bones and this cast gave it a red-hot go.

Despite its title and its holiday time slot, TAKE ME TO NEVERLAND is not a fairy tale and is aimed at more mature audiences. Whilst fun and light-hearted at times its exploration of dark themes such as mental health, and flashes of violence and intense psychological trauma definitely take it out of the children’s theatre realm.