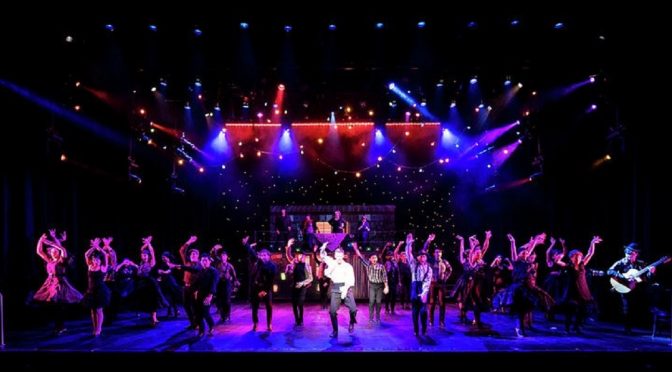 Set in the mid 1980’s it follows Scott’s search to be true to his creative self and here is presented as a fairy tale. It’s the inspiring story of a championship ballroom dancer who defies all the Federation rules to follow his heart. Lovingly directed by Tom Sweeney all the favourite songs are retained (Perhaps , Perhaps , Time After Time, Love is In The Air etc ) and it is smoothly paced with a great cast and fine ensemble work. END_OF_DOCUMENT_TOKEN_TO_BE_REPLACED 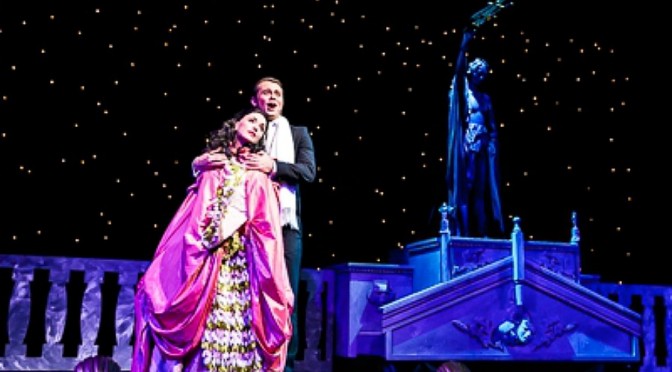 THE PHANTOM OF THE OPERA, Lloyd-Webber’s musical based on the French novel by Gaston Leroux , opened in 1986 in London . By 2011 it had been seen by over 130 million people in 145 cities in 27 countries, and it is one of the world’s most popular musicals. The main plot is set in the building of the Paris Opera – from its dizzying heights to its mysterious subterranean lake- and concern a beautiful soprano, Christine Daaé, who becomes the obsession of a mysterious, disfigured musical genius , Erik, aka the Opera Ghost (the Phantom of the Opera) who is feared by all .

There are some slight changes to the gigantic stage version we know and love (eg no fake half elephant for ‘Hannibal’ and the huge staircase needed for ‘Masquerade’ is not really a huge staircase) but it is the’ Phantom’ we know and love from the standard ‘Really Useful ‘production with the boat, dry ice, pyrotechnics, the mysterious mirror, the plant like designs for the organ all magnificently done.

Supporting roles are more than handled capably and the ensemble under the excellent direction of Declan Moore is disciplined and wonderfully controlled. The superb costumes are stunning (especially for instance all the assorted ones for the ensemble in ‘Masquerade’ , and not forgetting the ancient Roman ones for’ Hannibal’) ! .

Generally the scene changes are cinematic and quite fluid with the use of snapping hanging drapes and flats for instance  in ‘ Music of the Night’ .

The orchestra under the excellent baton of Greg Jones played Lloyd Webber’s lush, lilting ‘Romantic’ score terrifically .The score possibly seems to have been ‘jazzed up’ a little at a couple of points and perhaps in a couple of places was messy , the complicated rhythms and leitmotivs jumbled. But overall, glorious. The corps de ballet girls were lovely often in white rehearsal tutus as in paintings by Degas.

Moore has been very lucky in his excellent leads and other casting What a splendid performance was given by Simon Greer as our tormented anti-hero the Phantom , brilliantly acted . He has a strong but possibly rather light tenor voice. He was dynamic and compelling , weaving his somniferous magic and controlling us and Christine in ‘Music of the Night ‘ and making us melancholy and pity him deeply when he reveals his secret , unrequited love for Christine.

In this version he wears a full dark hairpiece as well as the white half mask , making him sort of look like a Latino lover, very suave and sophisticated. It is only toward the end of Act 2 that we see his disfigured, ravaged face. When he appears as the Red Death in ‘Masquerade ‘ it is terrifying .

Our heroine, petite dark haired Sarah Brightman look alike Chloe McKenzie was tremendous as Christine Daae with her fresh coloratura soprano voice. She was delightful in Act 1 (‘Think of Me’ ) , tremulous when falling unexpectedly in love with Raoul ( ‘That’s All I Ask of You ‘ ) and stops the show with her heartbreaking rendition of ‘Wishing You Were Somehow Here Again’ , mourning her father and torn between Raoul and the Phantom . And her ‘The Point of No Return’ was hypnotic and powerful .Like almost all of us she succumbs to the Phantom’s mesmerizing ‘Music of the Night’ .

Our earnest lovestruck young hero , Raoul , Comte de Chagny was terrifically played by Gavin Brightwell who has a charming ,rich baritone .He was strong , supportive and comforting of Christine , gallant and defiant when facing the Phantom. His duets with Christine were marvellous. Theirs is a most uneasy eternal triangle.

Christine’s rival at the Opera, the reigning temperamental ,scheming diva Carlotta Giudicelli was deliciously, wickedly played to the hilt in her fabulous costumes and makeup with much enjoyment by Georgia Kokkoris .David McKenzie has a great time supporting her as the rotund , egotistical Pavarotti like archetypical leading tenor Ubaldo Piangi.

Tall, stern Madame Giry, intimidating in black, was excellently performed by Virginia Natoli, and her very talented up dancer daughter Meg was charmingly played by Kate Ash. Mention must also be made of the two new managers of the Theatre Andrew Benson as Giles Andre and Andrew Castle as Richard Firman , driven to distraction by the Opera Ghost .

A sweeping, epic love story, a most splendid performance with spectacular visuals. And yes ,given the theatre, costs ,and circumstances the chandelier is most impressive.

And now for ‘Love Never Dies’ …

Willoughby Theatre Company’s magnificent production of Phantom of the Opera runs at the Concourse Chatswood until June 1. Running time 2 hours 45 (approx) including one interval