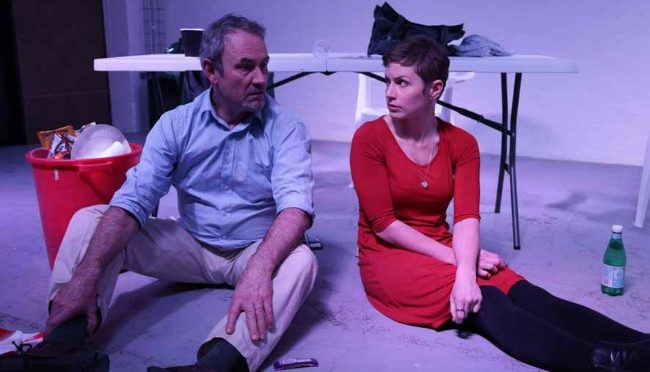 After burning though my text data allowance, I eventually found a friend to come with me to see BLACKBIRD playing as part of THE FRINGE. Read the publicity; look up the Wikipedia article; skim reviews of productions past and it does not look like an entertaining night at the theatre.

And in the event it is true that the subject matter is reprehensible, the characters vile and some of the content revolting, yet good theatre can take the ugly and make it art. Entertaining is not an appropriate word for what Director Andrew Langcake has given to the audience with this strong production … instead it is the visceral complexity of vague, worrying and confusing emotions that he has brought out of the text.

It begins in a grubby workplace break room of some description and Una and Peter enter. She appears calm and self-contained, he nervous and fearful. Fifteen years ago, Una and Ray had a relationship. She was 12, and he was 40. He abandoned her in a grubby room, and they haven’t set eyes on each other since. Now by virtue of a photograph in a paper she’s found him again…

This two hander is playing in a small gallery space at the Off Broadway hub of The Fringe and the surroundings support the storytelling. There is a factory sense as the characters open the door to the laneway, planes fly low overhead and the hoons noisily rev down Pyrmont Bridge Road. Peter is very aware of where he is, of who might come in and disturb, catch, him.

Eleanor Ryan’s Una appears to be in command when she is directed into the room. Ryan has subtle command of her character, both physically and emotionally, and invests Una with the unstated questions about why she is there. Her character choices early create the conflict about Una that we take away after the shocking denouement. She is spare in her gestures and in that scarlet strip of a dress, there is dynamite ready to explode.

When Ryan lets emotions fly, she twists and hunches rather than opens out which increases the mystery surrounding the Una. It’s nicely done. Another directorial aspect I really appreciated was the way Una looks out for almost all of her dialogue, only occasionally allowing her abuser to see her face. It’s about the male gaze! Peter can’t keep his eyes off her.

As played by William Jordan, Peter is nervous all the way through and as he picks at his hands he does not seem to be capable of the atrocious behaviour that we are told of. His jail time has changed him but does he really believe that he is just a man who falls in love, rather than a man sexually aroused by children? Initially, Jordan does not completely invest this man with the complexity and depth that we might expect. There is a lot of surface and it’s very much the same. Towards the end of piece we do get a greater insight into what drives him and why the darkness within is so buried.

Peter is made doubly hard to interpret by the spare, staccato and halting way he is written. The play wins awards every time it is produced and one can see why. Hollywood has just released a film adaptation.

Commissioned by the Edinburgh International Festival in 2005, playwright David Harrower created a searing and provocative piece with Scottish DNA. Interpreted by a native speaker, Peter’s lines would have more music to illuminate some beauty inside the beast. The blackbird is known for the beauty of its male’s song.

However the cast do well with the accents but it does take time to tune in. Langcake’s direction allows that time as the protagonists begin with limited movement and quiet interactions. He has also done an excellent job of guiding the actors through the interpretation of nature vs conditioning.

Peter is clear about what happened to him in jail and Una is honest about her perceptions about her 12 year old self. The audience must make up their own mind as director and cast are successfully neither ambivalent nor prescriptive in the way they present the inner torture.

While I did spend one sequence with my face buried in my brave friend’s shirt, I came away from the production with heightened senses and lingering questions. This simple, intimate production has both physical power and intellectual reach.

BLACKBIRD by Throwing Shade Theatre Company continues at The Off Broadway Hub as part of the FRINGE until 10th September. 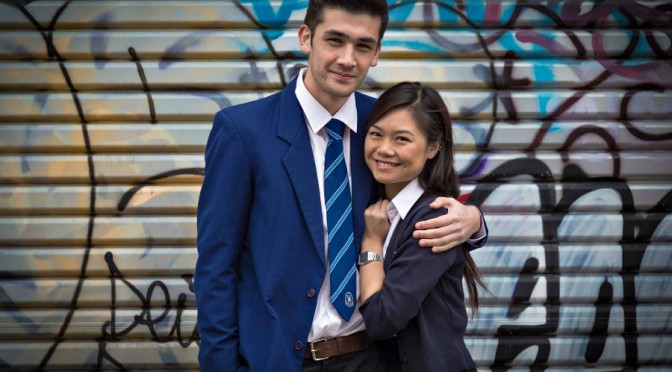 For many theatremakers, in the making, the two theatres at the Tap Gallery run by the inimitable Lesley Dimmick is their main chance to get their work up…to finally get to see their script up out of their heads and onto a stage and in front of a live audience.

Flamboyant Tap Gallery boss, Lesley Dimmock, runs her two  theatre spaces very democratically….there is no selection process…if you can raise the funds to hire the venue- the rates are reasonable- and there is a theatre available…then the space is yours for the duration of your booking.

Kathy Petrakis, a writer in a number of different genres, has taken up the opportunity that the Tap Gallery affords, and has her first full length play Black Rainbow currently playing for a brief, week long season.   END_OF_DOCUMENT_TOKEN_TO_BE_REPLACED 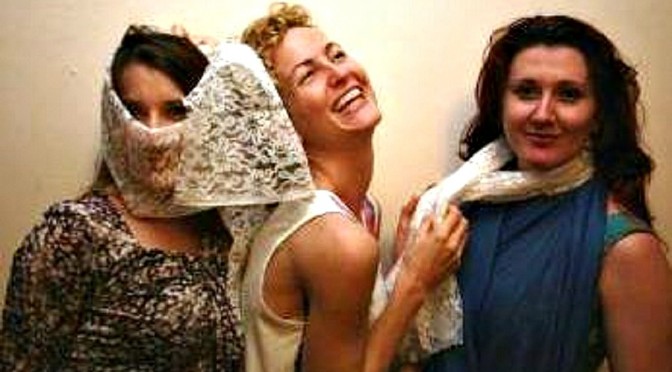 AFTER EASTER begins just before Easter 1996 when Greta goes on a journey to discover her own identity, searching backwards and forwards in time, from thirty years ago up until the present day.

Devlin’s play is a contemporary portrait of Greta and her family. She finally finds her authentic self, a quest that is not achieved until the final scene which is set after Easter 1996. The audience witnesses revealing moments from each of the members of this unraveling family, allowing the audience to experience what these contrasting characters feel and think, such as Greta’s Marxist father, and what each family member regards as ”right” and ”wrong” in regards to the betrayal, love and death, the catholic religion, and the problems of Northern Ireland. Armed soldiers add danger and tension. We learn the essential place of these women, in the rebuilding of a broken society.

2014 represents the Factory Theatre Company’s 14th year as a professional theatre company, and its fifth year as the resident company at Star of the Sea.