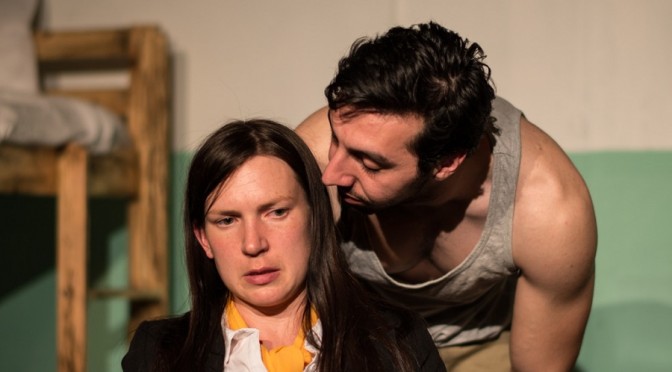 When this new work opens, the titular character is a broken thing.  The iconographic photo of him as a revolutionary leader is there onstage, above the bible.  It is at the bedside in the small hotel when a visitor is shown to her room but the real man is collapsed on the floor of the stark, bloody cell.  He has been there since the audience began filtering into the small space. END_OF_DOCUMENT_TOKEN_TO_BE_REPLACED

George Axlerod is a master playwright, and has created another screwball comedy play, as good as his play “The Seven Year Itch”.

Charlie Sorel isn’t the man he once was. Ever since he was shot by a jealous husband. Charlie can’t remember what happened, and finds himself returned as an attractive blond woman.

It seems that ‘someone up-there’ is determined that Charlie atones for his sins. But although Charlie has changed, he doesn’t understand what exactly his sins were, or how his punishment fits his crimes.

His best friend is staying at his house, as he puts Charlie’s affairs in order and after being convinced, finds himself an unwilling helper in Charlie’s new plan to marry into money.

The original Broadway production of “Goodbye Charlie” written by George Axelrod opened at the Lyceum Theater on 16 December 1959 and ran for 109 performances starring Lauren Bacall.

Those who want to see a quintessential Sixties play, along with some rib-tickling one-liners, will be delighted with this play, now successfully localized to be set in Sydney in 2013.

Highly recommended and with a great surprise ending, GOODBYE CHARLIE, directed by Deborah Mulhall, is playing at the Star of the Sea Theatre, Cnr Collingwood Street and Iluka Avenue, Manly until September 29, 2013. Session times:-Friday and Saturday evenings at 7.30pm, and Saturday and Sunday matinees at 3pm.