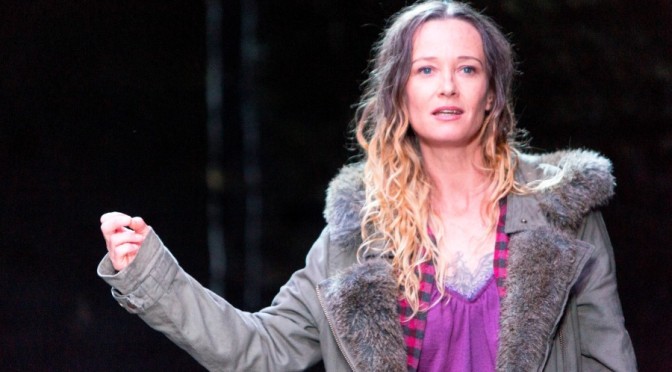 One of the most telling factors in the success of a play is how well, how vividly, a playwright draws/paints her world and its characters.

In this regard, Melbourne playwright Peta Brady scores a bullseye with her new play, UGLY MUGS. There isn’t a false note to be had through the play’s rapid-fire seventy minutes.

The world of UGLY MUGS is the world of the street…of people living on the edge…of directionless, restless young people. It is a world that Brady intimately knows, having worked for the past 15 years as a drug and safety outreach worker in the seedy St Kilda area. Her love for her ”street people’ shines through and makes this a special night in the theatre.

The action takes place over just one day and night. We follow two storylines. In the main line, a murdered prostitute comes alive on the mortuary slab and tells her ‘story’ to the Doctor performing her autopsy. In the second, a bizarre encounter between two teenagers ends up with the boy, simply named Son, being held in a juvenile prison cell.

In a popular technique, the two narratives, at one time, intersect and then the play drives on to its disturbing conclusion. I, however, embraced Brady’s self-effacing, gritty and frank characters much more than the, at times, tricky narratives.

Brady herself gives a winning portrayal as the feisty main character, simply named Working Girl. The girl’s quick witted, sharp as a tack, and a great raconteur, telling some classic stories about some of her more off-beat clients.

Brady also doubles up playing Mum, the working class battler who visits Son in jail. Mum’s character is marked by her forever sprouting homilies and trivia that appear inane but have profoundity.

Very experienced thespian Steve Le Marquand impressed playing multiple roles, playing the part of Mug (Mug is slang for the client of a prostitute. The Ugly Mug of the title refers to a client who is violent) as well as the mild mannered mortuary Doctor.

Harry Borland, in his stage debut, and Sara West impress as the two restless teenagers flirting with each other and testing one another out. It’s their frankness and sharpness that appeals. When his Mum tries to tell him that maybe she was leading him with the clothes that she was wearing, Son retorts sharply, ‘Clothes don’t ask for a fight.’

Marion Potts’ production, which originally played at her home theatre, the Malthouse, served the play well though at times the style felt a little too sharp and minimalistic… At least a bit of a set would have been nice. The fast paced, colloquial dialogue was, at times, tricky to follow.

There is a quote said by the Doctor during the play:-‘Life isn’t about waiting for the storm to pass/ It is about learning to dance in the rain’. The characters in UGLY MUGS are true rain-dancers. For these people, the storm never passes.