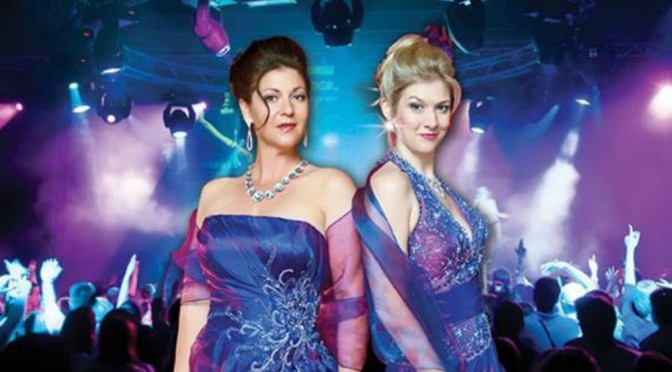 Central to the success is a rendering of well-known opera arias and duets directly alongside excerpts from musical theatre and crossover vocal hits. The two divas compete for the audience’s adoration as well as the affection of their guest baritone, Robert Hofmann.

Moments of changed lyrics, hilarious use of props and visual gags add to plenty of bold audience participation throughout. The show bravely accesses music and stories and tweaks them for the general public whether they are opera and musical theatre devotees or not.

Excerpts from over twenty stage stories fit into the new structure. The atmosphere of a theatre orchestra is suitably provided by Tommaso Pollio’s vibrant piano accompaniment. The choice of passionate, fantastic operas by composers such as Mozart, Bizet and Verdi concerning mortals rather than historical tales of the gods works well for this operatic project.

Smyth and Shaw blend terrifically together. The essence of major operatic or stage moments are enhanced but never compromised. Their vocal control and colour allows for snappy sketch-like delivery, choreography and imposed humour to be built like a scaffold around the traditional structure. Mozart’s transformed ‘Queen of the Night’ aria is a worthy example of such creativity and mix of performance skill.

On brief occasion a harmony part momentarily obscures the well-known melody line. It is however pleasing to have such strength across the small ensemble. Some English language textual changes are challenging to decipher at times in trained operatic voice, though for a very large amount of the time the diction was perfect. The modern buffa energy is always well directed and timed.

The addition of baritone Robert Hofmann is an essential character for the divas to be luscious and gracious around. He is vivacious and scheming, continually delivering opera and musical theatre hits with panache.

Hofmann’s ‘Phantom of the Opera’ favourites are well presented, as is the “South Pacific” classic ‘Some Enchanted Evening’. This stable dramatic baritone colour and focus amidst the frivolity and brouhaha are admirable. Intact versions of ‘Toreador’ from Bizet’s Carmen and ‘La Ci Darem La Mano’ from Mozart’s ‘Don Giovanni’ advertise opera’s compelling qualities to the masses.

DIVALICIOUS-OPERA ROCKS! did rock the Sydney Opera House’s Utzon Room. It could be extended to a larger and more elaborate venue with gracious support of anyone ‘touched by DivaLicious’ enough to be a generous patron. For now, the diverse cornucopia of classics for this concept in an intimate and exquisitely-costumed setting works with DivaSerious success. 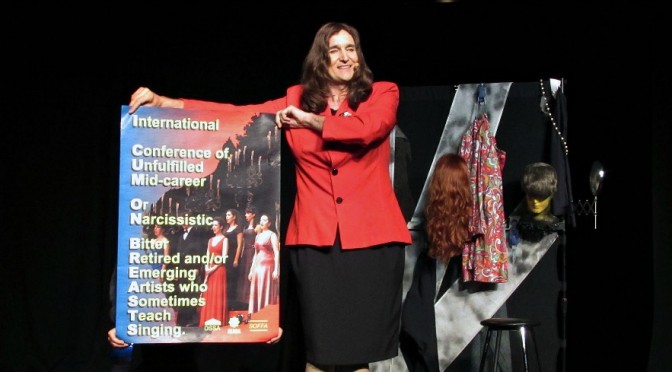 Award-winning cabaret DESPERATELY YOUNG AT HEART is a welcome visitor at the Sydney Fringe Festival. Its crossover between the genres of music and comedy results in an hilarious and rewarding night’s entertainment.

Innuendo and skilfully crafted lyrics fly about as quickly as the necessary costume changes. Male and female characters parody singing students, vocal teachers, community singers and religion in the setting of a conference for mid-career vocal teachers. Robert Hofmann brings us each guest speaker or singer to share their individual tensions and desperate personal natures. END_OF_DOCUMENT_TOKEN_TO_BE_REPLACED