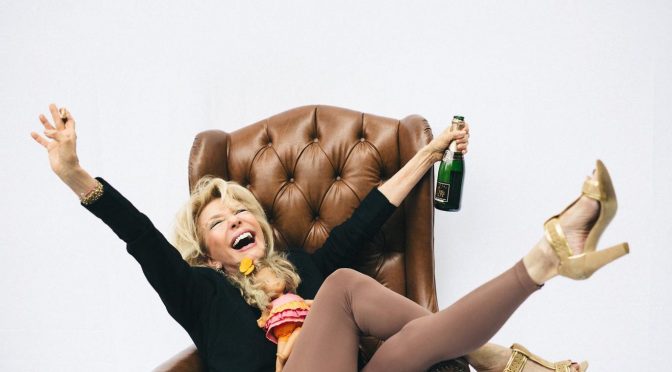 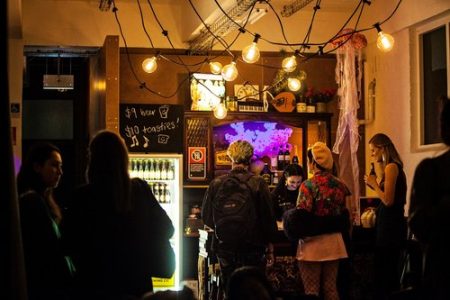 Pamela always wanted to be a performer. She wanted ballet lessons when she was six years old but her mother, a former model, disdainfully rejected that idea. Ballet dancers get fat legs. She eventually found her people by a fairly meandering path and became a performer, and in Naughty, Pamela tells the story of the some of highs and lows of her show business life. The joys and sorrows are linked by a selection of songs that lend insight into her remarkable life. Her voice is well suited to the show tunes that make up a considerable part of this show.

Pamela has been inspired by Roald Dahl’s Matilda. Matilda’s strength and intelligence and her ability to reject negativity are some of Matilda’s inspiring characteristics. Pamela sees Matilda’s willingness to take risks as a creed to live your life by. After opening with It’s Possible (In McElligot’s Pool) by Lynn Ahrens and Stephen Flaherty from the musical Seussical she jumps into Tim Minchin’s Naughty, from Matilda The Musical. These lyrics from Naughty give us significant insight into Pamela’s life. She set out to climb the hill to show business, ran into various difficulties and in the end decided you have to take risks and make your own way. END_OF_DOCUMENT_TOKEN_TO_BE_REPLACED 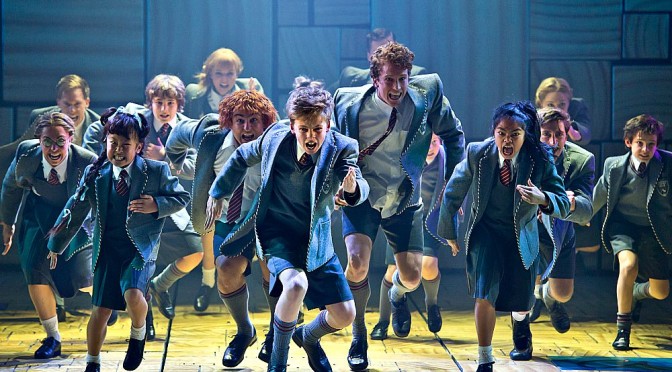 One of Sydney’s major musicals for the year, MATILDA has impressively taken over the stage at the Lyric Theatre at the Star.

This is a bold and colourful, in parts cartoon like and then at other times quite dark and poignant production.

The large ensemble perform with enormous relish and gusto. It is a re-mounting of the multi-award winning Royal Shakespeare Company production currently playing in London and is based on the much loved Roald Dahl book with music by Tim Minchin.

The school is presented as Dotheboys Hall like, with old fashioned desks and huge towering Victorian front gates that the cast climb and rattle. The set also has piles of books and alphabet blocks. There is also a wonderful, exuberant swing sequence for the schoolchildren opening Act 2 When I Grow Up – some of the cast seem to fly out over the audience. END_OF_DOCUMENT_TOKEN_TO_BE_REPLACED

Many talents contribute to the making of a fine play, and in ROSENCRANTZ AND GUILDENSTERN ARE DEAD which opened to an enthusiastic full house at the Sydney Theatre Company last Saturday, those talents were clearly visible.

The production was seamless, Simon Phillips’s direction flawless, the set both perfectly functional and satisfyingly inventive, the sound effects appropriate and the lighting (and, at all the right moments, the total darkness) effective.

As for the actors, all the cast were excellent and gave consummate performances. The stand-out ones, because of their major roles, were Tim Minchin as Rosencrantz, Toby Schmitz as Guildenstern, and Ewen Leslie as the Player. The play is long (about two and a half hours), and one has to admire their ability to memorise so many lines. Because the play is, in effect, a “three-hander”, its success, or otherwise, rides squarely on their shoulders. It can be stated, without reservation, that each meets that challenge adeptly. Indeed, for a large part of the play, Schmitz and Minchin are on the stage alone yet, by their actions, voices and timing- they seem to fill it.

Nevertheless, none of the above is truly memorable unless the play itself is a good one. History tells us that Tom Stoppard’s play must be very good, as it has been performed innumerable times all over the world since its premiere in 1966. Certainly it is replete with one-liners, puns and wit, and these all drew much laughter. But it must be said that without a knowledge of HAMLET you would not have any idea about the storyline, and even with that knowledge there were long periods where you would be equally lost.

It is an existential play, outwardly hugely comic, and inwardly very sad. If you do not like this unique combination, then the fine exercise of all the aforesaid talents still won’t make watching this play a totally enjoyable experience. However if you do like that mix, then this production is truly great theatre.

This Sydney Theatre Company and Commonwealth Bank production of ROSENCRANTZ AND GUILDENSTERN ARE DEAD, directed by Simon Phillips, opened at the Sydney Theatre, 22 Hickson Road, Walsh Bay on Saturday August 10 and is playing until Saturday September 14, 2013.