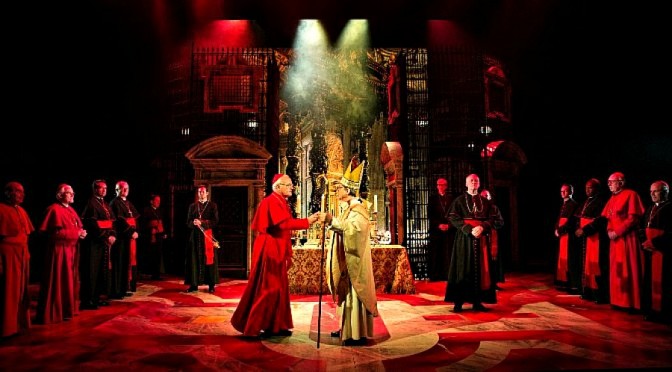 The audio was a highlight in this show, despite the cavernous and bouncy room  the designer was presented with.  The rig was 3 x line arrays far AUD L and R at the front of the room.

The dialogue was miced and all the principals wore cheek mics.  There were enough chorus and they were strong enough to be heard without micing.  The band didn’t have any amps facing the audience that I could see or hear so the mix was controllable.  And the volume was perfect.  I always carry earplugs because it is so often too loud and I constantly complain about it.  I know it’s hard but this show proves it’s possible.

In  this show, I hear the singers clearly over the band but I was still emotionally guided by the music: the wistful clarinet and the evangelical trombone.

There’s a show-stopper high note in Act 1 and the audio engineer built in a slight delay so that note reaches the ear a second longer than it should.  It’s a subtle and unworldly adjunct to a fine voice.

In Act 1 there was a tinkling, glockenspiel sound which was so close to my family’s Grandfather clock that I knew it was about time passing.  It was echoed in an alarm sound and the landline ring and a mobile message tone in Act 2.

This light sound was supplement by an occasional bassy, reverbed, thumping which was more pronounced at the end of the Act and did not reoccur in Act 2.  At one stage, the children were both using earphones so that the child cast were not exposed to the porn discussion, then, as a neat segue into the next scene, the daughter began dancing.  At this time, the sound effect changed to thump in time to the child’s moves.  The sound designer also resisted letting the audience in on what Nora was dancing to, but the kids knew.  The sparse SFX were really well placed and deeply evocative.

It’s not often I get into a philosophical debate at interval about a Sound Effect.  I thought it was the sound of Nora being metaphorically stomped and beaten down by Torvald. My companion believed it was a rumbling precursor to the shaking of the marriage foundations but he’s a therapist!

The lavalieres were small and only protruded past past the ear lobe.  There was no rustling during the on-stage costume changes.  It was interesting to see where the artists preferred the cable.  David Suchet and some others had it running straight down from the ear but most had it taped to the nape of the neck in the traditional fashion.  All speaking cast were miced and really well balanced. I was 6 rows back toward the centre and didn’t get any bounce or echo even from the big, bass voices.  And it sure freed the characters to move and speak upstage.  The cast were occasionally manipulated to be reverbed and echoed , for example, at the finale of the coronation and this worked effectively to give the appropriate gravitas.  There was also an echo rich voiceover at one stage.

SFX include lots of ecclesiastical music.  The opening was bells and a boys’ choir leading into a more discordant almost electronic noise.  There were stings used often in the plot to underscore some of the more mysterious events and some foreshadowing slings.

This article was first published on Judith’s blog- http://sydneylivetheatretechnicalnotes.blogspot.com.au 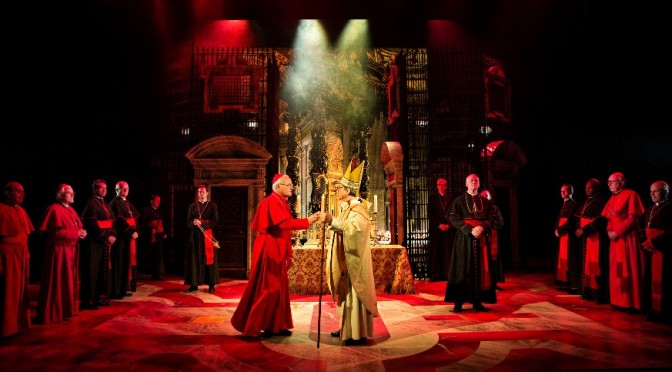 One of the first things that you notice before you even enter the auditorium is the delicate smell of incense wafting through. An olfactory cue that we are in the Vatican, as is the glorious choral music.

First performed in 2007 as part of the Chichester Festival and then with a massively popular London season and international tour , ‘The Last Confession’ written by Roger Crane and directed by Jonathan Church, is a gripping behind the scenes political thriller set in the Vatican during the reigns of Popes Paul VI, John Paul I and John Paul II. Most of the action centres around the unexpected demise of John Paul I in 1978 after only 33 days in the papacy. END_OF_DOCUMENT_TOKEN_TO_BE_REPLACED

Nearly a month ago I watched a rehearsal of DIRTY ROTTEN SCOUNDRELS, the new musical based on the movie of the same name, starring Michael Caine and Steve Martin. With performances at that rehearsal by musical luminaries as Tony Sheldon, John Wood, Matt Hetherington and Amy Lehpamer, deftly directed by Roger Hodgman it was an exciting experience. On that occasion I  interviewed Katrina Retallick and Matt Hethrington who both asserted that the rehearsals were such fun that it had to translate to an uproarious, laugh a minute experience for the audiences. Bold predictions all fulfilled and then some!

In what could best be described as  an effervescent performance, (the metaphor of a glass of  French champagne comes to mind – no make that a magnum), the audience was treated to a deliciously witty, quick succession of gags and musical numbers that positively fizzed on the palate and left one feeling sated. The humour was often tongue in cheek. For instance, as the set is struck through the wings, a hung over Muriel Eubanks, delightfully played by Anne Wood, asks:”Are these stairs moving?”

The tunes were catchy and the lyrics funny.  Stand outs numbers were “What’s a Woman to Do?” and “Love is My Legs”. The energetic mischievous cast were matched by great direction from Roger Hodgman,  a wonderful set and lighting, (even the lighting was mischievous!) Tony Sheldon, Matt Hetherington, Amy Lehpamer, John Wood  and Katrina Retallick were hard to fault, except perhaps for John’s fairly ‘sus’ French accent – but even that was tongue in cheek, puns and all!  The ensemble and orchestra were also very good.

When I asked Matt what he thought audiences would remember, he said “A great fun night.”   Too true! Don’t miss this.

DIRTY ROTTEN SCOUNDRELS is playing at the Theatre Royal  until Sunday December 8. Bookings Ticketmaster or 1300723038. After seeing STOMP on stage, many adjectives come to mind; awesome, invigorating, funny and contagious to name just a few.

Set in a bleak, industrial urban landscape, complete with hub caps, old tyres and paint tins, eight performers, dressed down suitably to their environment, appear with brooms as street sweepers gradually wowing the audience with extraordinary rhythms and sounds that you’d never expect from such a domestic prop.  The dynamic of sound and movement is done with razor sharp timing and choreography.

What follows is an amazing array of percussion props including paint cans tossed around and hit with complex rhythms, a shopping trolley frolic and inflated monster truck inner tubes worn around waists and used as pounding drum kits.

These feats of precision are all interspersed with humorous, silent moments of subtle and easy pantomime from the performers, teasing the audience, the power of their interplay reminiscent of Charlie Chaplin – very small gestures can create very big laughs.

Refreshingly, there are no words, bar the odd ‘Mr Bean-like’ hello, as the cast first appear and greet each other.  When there is the odd grunt or exclamation, it is truly noticed.  The show, being so infectious, has the audience clicking, tapping and clapping with every opportunity.

STOMP was first conceived in 1991 at the Edinburgh Festival and, with its escalating success, is in its 11th year in London’s West End and 20th year on Broadway, the record breaking longest running show at the Orpheum Theatre.  It has played to over 15 million people in 50 countries across 5 continents.

STOMP gave an impressive performance at the Closing Ceremony of the London 2012 Olympics, gathering 40 of its worldwide performers.  The show is also currently playing in the UK, US, throughout Europe and South America as well as Australia.

STOMP is a gem.  Catch it if you can.  It plays from September 10th to September 15th at the Theatre Royal in Sydney, the final leg of its Australian tour.