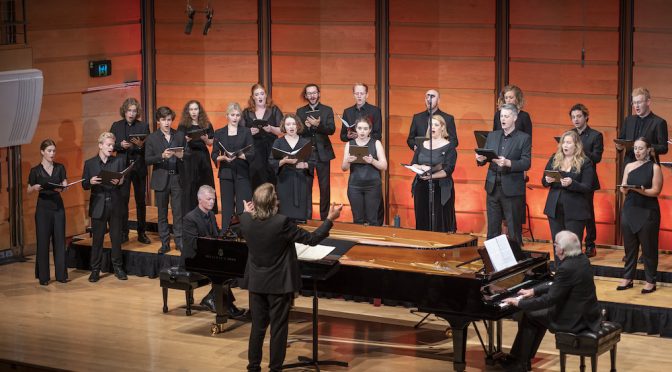 A most luxurious, splendidly performed concert by the Song Company filmed at the City Recital Hall Sydney and also streamed by the Australian Digital Concert Hall.

First we heard a thrilling performance of Thomas Tallis’s “Sancte Deus” – starkly dramatic, with voices soaring, flowing and rippling, followed without pause into Marc’Antonio Ingegneri’s “Tenebrae factae sunt.” Both were many layered and highly structured, with thunderous flourishes of voices  at other times haunting and pleading,

Antony Pitts,  Artistic Director,  then took to the stage and mentioned that the concert was partly in memoriam of Australian composer Nigel Butterley, who had passed away that day,  but that it was also dedicated to “those we have loved and lost” during the pandemic. Pitts also acknowledged the twelve new apprentices on stage with the Company for the first time. We were then asked by Pitts to imagine ourselves in the “intimacy of a 19th-century salon” for the rest of the concert: two works by Brahms, finishing with the German Requiem.