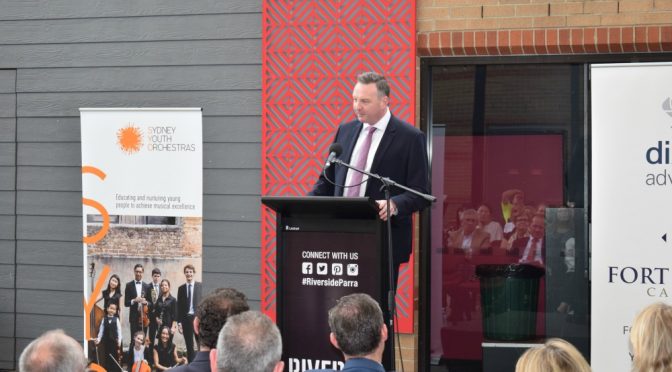 It was dry if cloudy at this invite only launch held in the undercover courtyard at the Riverside Theatres in Parramatta.

In her speech she spoke of how, ‘Music is about sharing, giving and connecting and that it is very exciting to be part of this launch and founding something new and inspiring  which makes music further accessible to all.”

She also said big ‘thank yous ‘ to the founding partners of the Western Sydney Youth Orchestra including Fort St Capital and Dixon Advisory, as well as the Riverside.
Ms Amanda Chadwick, Administrator, City of Parramatta Council spoke next, mentioning the other VIPS attending and the recent release of Parramatta’s Cultural statement

.She discussed the cultural statement which was about how Parramatta Council is promoting growing and celebrating culture and enthusiastically welcomed the partnership between Sydney Youth Orchestra and Riverside. She spoke of how , ‘Talent comes from every suburb and we are looking at an exciting journey, breaking down barriers and creating new opportunities.”

David Borger, Western Sydney Director of the Sydney Business Chamber spoke next. He reminded us that the Orchestra has given many talented young musicians a chance to rise to the next level, and that it is a training ground for professionals. He said that the Sydney Business Chamber is trying to provide funding to break the tyranny of distance and allow for travel and expansion of cultural programs and events.

Steve Hawkins of Fort Street Advisers said that opportunities for advancement should not be defined by postcode. The launch of the Western Sydney SYO creates a platform for the next great wave of musicians who come from the area.

The final speaker was the Hon Stuart Ayres MP, Minister for Western Sydney who excitedly declared that this would be the start of a new chapter in the story of the Sydney Youth Orchestra .

The new Orchestra’s area covers  from Penrith to Sutherland. He is hoping that the Western SYO will draw people from a wide geographical area, and said that this was all about providing high quality education and music for the area. Mr Ayers also referred to the upcoming national and international tours by the Sydney Youth Orchestra.

The launch concluded with a performance of Nikolai Rimsky Korsakov ’s Capriccio Espagnol, dynamically conducted by James Pensini and beautifully played by the Orchestra.

Guests then mingles, and further sampled the finger food and drinks on offer.