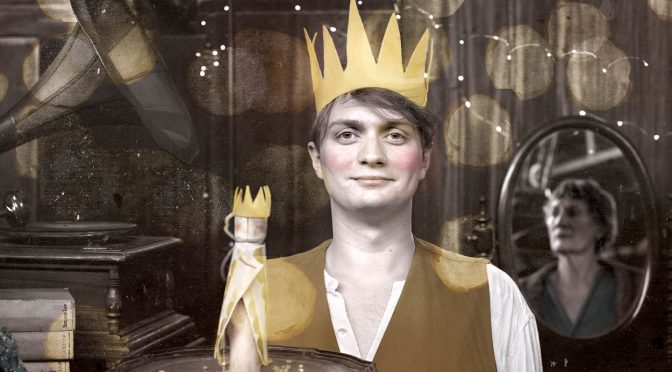 This is a magical, inspired production that had the young children enthralled (and adults too) .  It is an interactive immersive production devised by the wonderful Slingsby company based in Adelaide.

Sensitively adapted by playwright Nicki Bloom (Tender, The Sun and Other Stars, Little Bird), the production is based on Oscar Wilde’s classic story , first published in 1891 , and retains some of Wilde’s magnetic, hypnotic, lush language. Memorable , tantalizing ,lyrical descriptions of snaking perfumes of jasmine, and of pearls shaped like the full moon and brighter than the morning star are provided .

As we enter there are harassed but welcoming busy courtiers , mysterious chambers , curious installations to examine and secret compartments , the only sound the relentless ticking of a clock , on the journey to the Young King’s coronation. There’s instructions involving a secret, directions as to how to greet the king, your card checked, a slight interlude while waiting in ‘the first chamber’ to enter and then we get to make a cardboard crown and take our seat .

Are you an Industrious Denizen of the South ? A Rough Fisher folk of the North? Come from the gruff Forest Folk of the East ? Or a Gritty Prospector of the West ? We are welcomed and the various gifts from the people arriving from the four directions presented and displayed before being carefully taken for safekeeping, (much fun with the last one where ‘pass the parcel ‘ and messages are included in the many layers of wrapping) .

It is the story of an art-loving princess who rebels against her traditionalist father the Old King; and of her son, raised in the forest by goatherds who is revealed to be the heir to the kingdom. Unaware of his birthright, fate eventually catches up with the young man , removing him from his idyllic forest to the palace to assume his royal duties.

As a quest ensues for treasures to create his robes, crown and sceptre, the boy faces a series of meditations and internal struggles as revealed by three dreams . Privilege and treasures are laid at his feet – but at what cost to others ? The three dreams – of the looms, of the diving for pearls , of the battle between Death and Avarice – are vividly brought to life. The Young King’s eventual rejection of the oppressive structures of feudalism rocks the Kingdom to its core.

The specially commissioned, wonderfully atmospheric score, at times rollicking , at times piercing beautiful and lyrical , is by Quincy Grant who accompanies the action live on several instruments, including piano and clarinet . The delicate ,extremely effective , atmospheric lighting by Geoff Cobham (fashioning everything from gleam of gold to the soft glow of jewels ) is beautifully incorporated.

Tim Overton and Jacqy Phillips narrate the story and act the cast of thousands and are also splendid at shadow play, torches , and puppetry .( think sort of a blend of Theatre of Image and 1927 perhaps ) .

They’re terrific together — Overton as the young fresh faced king with boyish charm : he is wide eyed with wonder and curiosity , awed by the beautiful objects and his robe for the coronation , but saddened to discover the hardships suffered to obtain them . As Death he is far more sinister with thrilling use of torches and shadows . Phillips in theatrical black is grumpy , cantankerous and scary as the Old King and as Avarice in the battle between Avarice and Death.