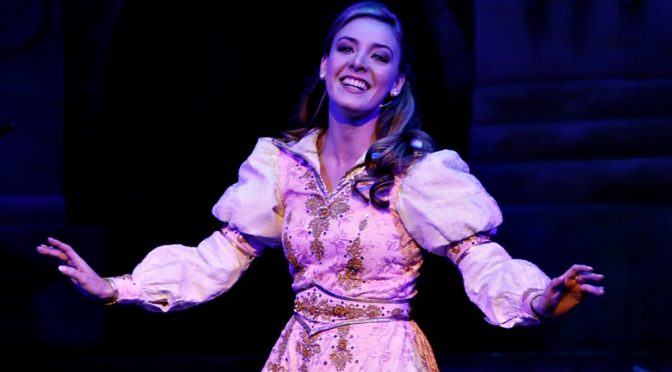 Oh to be a kid again! And to be a kid nowadays! There was no such thing as the annual winter holiday pantomime when I was at school. I remember watching my mum and dad get all dressed up to go to the theatre, leaving us at home with a babysitter and a video tape.  It seemed like such a fantastic, sophisticated world that I would never know of. I dreamed of The Opera House, The Capitol, The State, without really having any idea what went on inside those hallowed walls. Now, due to the success of Cinderella, Snow White, Aladdin, and Peter Pan & Tinkerbell, it has become a winter school holiday tradition for parents to take their young children along to the State Theatre for a live show designed specifically for them.

English born Bonnie Lythgoe is the beaming creator of this whole idea. After decades of involvement in the performing arts as a dancer and choreographer for film and TV, Lythgoe turned her hand to the production and direction of fairy tale adventure pantomimes several years ago. She has enlisted the talent of some big name stars from the world of “serious” theatre (meaning for adults) and has almost formed a new genre of live show, one that, like some of the great Disney Pixar films of the last decade, manages to cross the age barrier and reach both the parent and the child. Sleeping Beauty, A Knight Avenger’s Tale is pitched to ages three to 103. END_OF_DOCUMENT_TOKEN_TO_BE_REPLACED 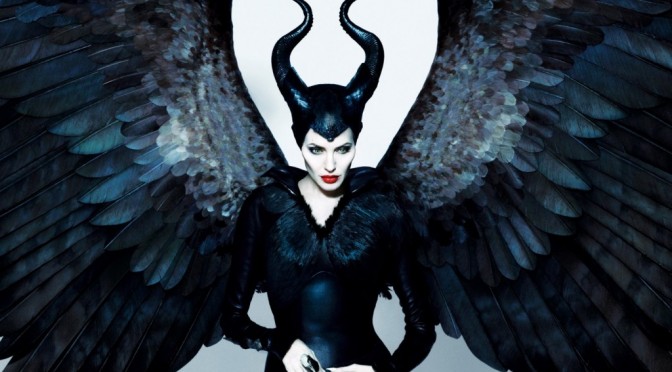 Disney’s movies and theme parks were created for adults to feel young again, and MALEFICENT with its new twist, was created for everyone who enjoys this genre.  Watching it one gains a whole new perspective on the fairy-tale innocence of the Disney Animated classic Sleeping Beauty and one learns all about Maleficent, the thirteenth fairy godmother.

A must see dark fantasy movie, Angelina Jolie is magnificent in the lead role. of this new Disney film directed by Robert Stromberg.

END_OF_DOCUMENT_TOKEN_TO_BE_REPLACED

In this huge production by the Royal Ballet the dancing is superb, especially by the two leads. It has an extremely ‘traditional’ feel about it and is a 2006 attempt to reconstruct the famous 1946 Oliver Messell production that reopened the Royal Opera House after World War 11, starring Fonteyn and Helpmann.

This current production was always all about remembering the company’s immensely rich heritage. Monica Mason, then artistic director, set out to restore most aspects of the now legendary 1946-67 production by Ninette de Valois (director), Oliver Messel (designer), Ashton (coach and supplementary choreographer) and Fonteyn (prima ballerina).

END_OF_DOCUMENT_TOKEN_TO_BE_REPLACED From the opening dramatic, crashing chords, expect the unexpected. Chilling, thrilling, shocking and darkly disturbing this is a glorious reworking by Matthew Bourne of the Perrault fairy tale.

This is the third of the big three Tchaikovsky ballets Bourne has choreographed (‘ Swan Lake ‘in 1995  ,’Nutcracker’  in  1992 ) so here you can pick  snippets of tiny phrases from his ‘Swan Lake  ‘ ( especially for example in the big waltzes ) and also his ‘Highland Fling’ and ‘Town and Country’ .

The production is currently touring America. It has lavish, sumptuous sets and costumes courtesy of Les Brotherston and features the luxury of Bourne’s magnificent , sometimes fiendishly demanding choreography (especially difficult  in some of the lifts and catches of the pas de deux).

The opening is set in 1890, when the Petipa version was first produced for the Russian court. We’re given a brief summary of the back story: a desperate childless royal couple have been given a baby by Carabosse, but they have neglected to show their gratitude. (Most unwise!.) In the 1911 section , Aurora’s 21st birthday , are we meant to pick up references to Nijinsky’s ‘ Afternoon of a Faun’ and ‘Jeux ‘ in the choreography?!

The basic plot structure of the traditional fairy tale is kept, with a major battle between good and evil .The scenic transformations and the Romantic use of the full moon are spectacular and breathtaking. The fairy solos (here they are called Ardor, Hibernia, Autumnus , Feral and Tantrum and are in tattered 18th century style costumes ) are all reworked by Bourne , but with tiny references to the original Petipa.

In this version , to the ‘white cat’ music, Leo is uneasily trapped as a ‘guest’ at the vampire wedding at a strange nightclub. I liked the nifty updating to ‘now’ (well, 2011) with the tourists taking photos at the gates covered in roses, holding their mobile phones.

In this version the Lilac Fairy becomes dazzling Count Lilac, strongly and superbly danced by Christopher Marney with spellbinding technique and elevation, and strange, dark eyes.

Carabosse and her son who continues the curse, Caradoc, were brilliantly danced by Adam Maskell. As Carabosse he is evilly proud and commanding, dramatic in red and black (and note the black swan like costumes for her minions.) As Caradoc, he is mesmerizing and hypnotic and yet simultaneously sinister and enthralling. His dance at the party with Aurora where he hypnotises, manipulates and seeks to control her is chilling, and there is a strange dance with the sleeping Aurora when he is sitting for hours brooding, watching over her.

Leo the gardener, our hero, was magnificently performed by Dominic North. He sacrifices his life for love at the end of Act 1 to (spoiler alert!)  Count Lilac to become a vampire to survive Aurora’s century of sleep. But all ends happily – or does it?!

Here the King in 1890 / 1911 is presented to look like the Tsar Nicholas or his cousin King George V and the Queen to be like Queen Mary or the Tsarina Alexandra ( and hints of the mother in Graeme Murphy’s ‘After Venice’ ).

Aurora herself is first seen as a wayward, willful, tiny baby, who has a mind of her own. ( A wonderful puppet , that crawls along the floor and even climbs the curtains , scandalizing the harried governess Miss Maddox and the other servants).Then she blossoms and becomes the magnificent Hannah Vassallo . The ‘Rose Adagio’ becomes an ecstatic, swooning, swooping love pas deux for her and Leo with death defying leaps and catches. Do we see hints of Macmillan’s ‘Anastasia’ in the business with the boots in Act 1? Her hypnotised zombie like marriage to Caradoc is chilling and develops into a ritual sacrifice until she is rescued in the nick of time by Count Lilac and the now supernaturally gifted Leo (phew).

It is also an allegory of sight and touch – both Leo and Aurora are blindfolded at certain points. And there is the dangerous prick of the poisoned dark rose thorn. And observe how tenderly in one of the pas de deux Aurora nuzzles Leo’s wings.

This is was a dark, lush , lavish production that is both sinister and enchanting, – a thrilling , glorious reworking of this tale.

The magnificent State Theatre was a stunning, very appropriate setting for this very chocolate-boxy work that demands very spectacular, lavish sets and costumes and magnificent dancing of the very difficult, showy traditional Petipa choreography (which actually sometimes was adapted rather hastily) . It is now considered one of the landmark test pieces of nineteenth century classical Russian ballet , along with the other Tchaikovsky /Petipa works SWAN LAKE and THE NUTCRACKER. This is a very traditional, extremely pretty –pretty version that will delight little girls and Aunt Ednas.

The principals were marvelous and generally the corps de ballet ensemble work was great. However – Tchaikovsky’s lush, glorious music was recorded, not live, and at times the quality was so bad it was almost painful. Also the sets were obviously for a much larger stage, and especially in the Prologue and Act 1 the dancers barely had room to move. I quite liked the staircase and other designs for Act 3, but otherwise was not impressed. Also the colours of the costumes at times clashed badly. Technically overall the dancing was very good, but in some of the minor parts the mime was overdone and the dancing rushed through.

Alexander Volkov as Carabosse obviously had a whale of a time badly hamming it up being imperious and commanding. Tall, and in striking black and white, he wasn’t scary at all , nor was his mouse entourage.

Her opposition the’ good ‘Lilac Fairy, was exquisitely, sweetly danced by Anna Pashkova , who has a fabulous Classical technique and radiates confidence and assurance when battling Carabosse. The Lilac Fairy has a huge entourage to help her.

Lina Seveliova was marvelous as Aurora .Dewily pretty , with huge eyes, she was an exquisite young princess .Technically she was excellent, terrific in the Act 1 ‘Rose Adagio’ and in Act 3 we saw her transformed to a radiant bride in love. The dashing suitors in Act 1 for the Rose Adagio were delightful, but why did she barely look at them?!

Our hero, Prince Desire (Nariman Bekzshanov) was amazing with stunning soft jumps and turns. A magnificent dancer, he is a terrific partner and his solos in the Grand Pas de Deux in Act 3 were thrilling. However the design of the billowing half-cloak he wears in Act 2 is very distracting and ‘cuts’ the ‘line’ of his dancing .

The fairies in Act 1 were lovely, but it was hard to distinguish between them as they were all in very similar costumes of the same pastel colour (except for the ‘Twittering ‘ Fairy in canary yellow). In Act 3, for the wedding celebrations the fairytale characters had much fun. Everyone loved Puss In Boots and the White Cat, and the Bluebird pas de deux was spectacularly performed by Kirill Radev and Radamaria Nazarenco-Duminica.

Aurora’s parents, the King and Queen, were, I am afraid , rather wooden puppet like, elegant nonentities. Fussy, foppish Catabalutte was very well played by Arcadie Nazarenco. Yes he is tormented and his hair torn by Carabosse but why the odd black skull –cap like hair piece?!

As one of my colleagues has remarked, this is quite a long work and there is a convoluted narrative with sudden twists (a romantic rescue and kiss followed by all the formality and rigmarole of a huge court wedding with various fairytale characters as guests). It can either be riveting and enthralling or dull and hard work which I am afraid this was in parts. But all the little girls and their grandmas who packed the theatre out loved it.

The production ran for 2 hours and 45 minutes including 2 intervals. SLEEPING BEAUTY played the State Theatre from the 30th August till 2nd September. The production is next playing Wollongong and Newcastle.