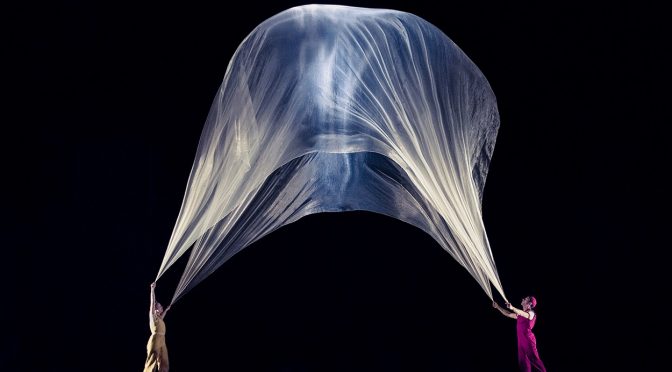 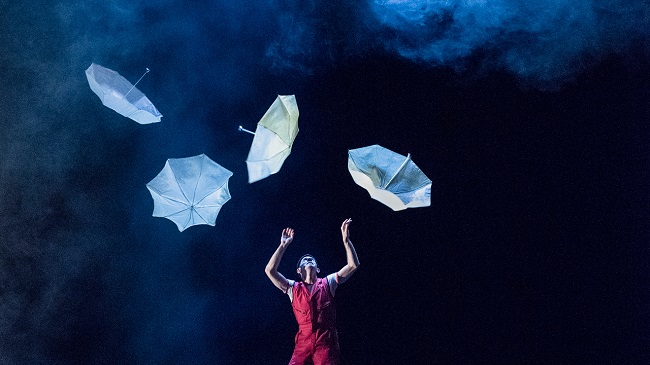 Go on , treat yourself , rake your friends and family , indulge your inner child with this marvellous show that is visually stunning and full of warmth, joy and delight.

Devised and performed by Acrobuffos from the USA – Seth Bloom and Christina Gelsone – in collaboration with kinetic sculptor Daniel Wurtzel , AIRPLAY incorporates movement , silent comedy , acrobatics and mime as well as a dazzling display of balloons and other props as well as fabulous billowing material . Each has a hard wheelie travel case that contains assorted props.

Sydney Dance Company followers might perhaps be reminded of Graeme Murphy’s ‘Air’ and ‘Other Invisible Forces’, while theatre goers might perhaps think of the joyous sense of wonder and audience enchantment of Slava’s ‘Snow Show’ .

In AIRPLAY two friends or siblings (Bloom in red, with blue hair, Gelsone in yellow with purple hair) journey through an airy landscape where we see umbrellas and balloons have a mind of their own, confetti become a starry night sky and there is much use of rippling silk and what looks like clear plastic in a visual feat of aerial sculpture. Physical comedy , childish pranks and cunning competition are included as they quarrel , tease. separate,  experience loneliness and loss yet eventually reconcile .

The diverse soundtrack ranges from opera and other classical music pieces to rap, gypsy folk and choral pieces.

The balloons range in size from tiny to human size (yes really, the two performers clamber inside them at one point becoming totally absorbed) .There are umbrellas , a feather …

The audience interacts and participates , with Bloom and Gelsone clambering over rows , while various members of the audience at different points hold one of Gelsone’s shoes, or attempt to bounce and guide various balloons back to the stage as an example .At another point two people are chosen and end up on stage collecting balloons with butterfly nets .

Perfect Festival, or any other time, fare. 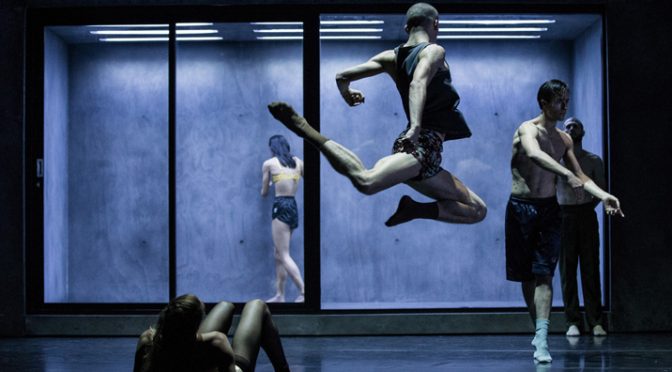 Swift as wind. Supple as water. Grounded as surely as the summit of a mountain nimbly flits through fleeting clouds, and stays irrefutably present.

The spry air is charged, set alight by the fiery lightning that strikes from dancer to dancer and shoots through the audience.

The space between dancers is at once brimming with intercourse and fully, delectably pregnant: opening a boundless wellspring of infinite flow and limitless directions in which to move.          END_OF_DOCUMENT_TOKEN_TO_BE_REPLACED 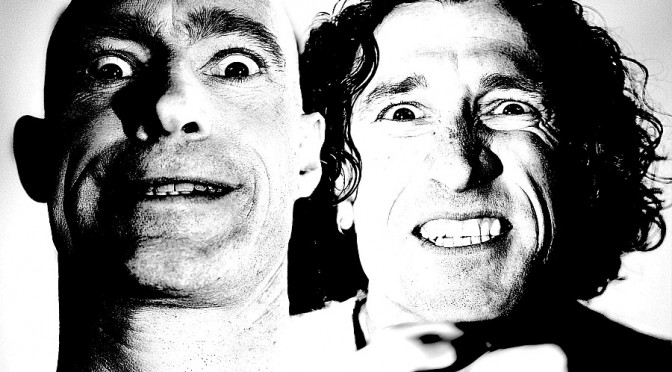 Checking in to Fratelli Fresh for a pre-show chow down I spy Dave from the Umbilical Brothers sitting solo. I figure he’s here for a similar pre show chow down.  As I am shown to my table, he is shown the door. See you soon, I say to myself, anonymous audience member mumbling anonymously. I wonder if he had in fact eaten or drunk anything or was he miming a degustation.

Later in the Mens at the Roslyn Packer Theatre, after a pre-show bladder voiding, I wondered if I’d blundered into the show proper and was part of an elaborate audience participation manoeuvre as I encountered a sink with a washing and drying apparatus a certain dexterity; a device where you can simultaneously wash and dry your hands if you’re not careful. Timing is everything. END_OF_DOCUMENT_TOKEN_TO_BE_REPLACED