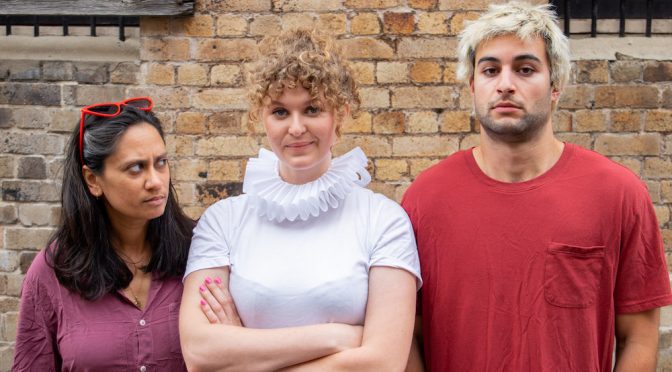 WIL AND GRACE. This little start up comedy was a welcome first, at least personally, for attendance and review, post Covid Lockdown. It was also good to see it at the old 505 space in Newtown, where Friday night jazz (with considerably shrunk audiences) began as the first Sydney performance night post lockdown 2020. The current show proved a worthy tonic for throwing off the stymied interior world of the past months – although that was not it actual intention.

The show was one of many slated for mid 2021, and deferred until now. Its story, of a summoning of a deceased person (following advice from “Wikiworks”!), who turned out to be William Shakespeare, was far fetched and may or may not be original. It did not matter – the narrative was a string on which to thread an abundance of quick one liners and dialogic flourishes. It was well structured and assured, with lots of audience responses, and the author Madeleine Wirthington (also also played the lead Grace) is encouraged to continue writing for comedy on stage – she certainly has a flair, something confirmed by her biographical note in the program.

The first ten minutes could resemble a good “Short and Sweet” show – how was the show extended to over an hour, and can seem to be longer than that? The narrative has to do with the unpicking of the first plot and its restitching and extension by two characters (Suz Mawer as Vayra and Joshua Shediak as as Wil) in order to maintain the illusion of Shakespeare for Grace. The narrative becomes more and more far fetched (seizing and withholding a passport in order to detain someone, for heaven’s sake) – but entertainment value overrides mere realism, and besides Grace’s motivation as an aspiring actress to believe Shakespeare is who he says he is explains quite a lot. Jokes about lines from the bard and a visit to Bell Shakespeare’s Hamlet provide a source of much of the comedy. We also glimpse a sincere side of Grace as a young actress, with some lovely passages about the pleasures of theatre acting.

The problem is, by the end of the play the prime motivation for Grace has become her relationship with her father, and finally as it plays out and ends with his death. This second motivation for her belief in the presence of Shakespeare is not well developed or convincing in the play as a whole – anymore than are depictions of mental health, anxiety, excessive drinking and nudity, as contained in warning at the stage door and in an otherwise handsome program. The show is light comedy. There seems no need for show stopping seriousness at the end of what is already very successful melodramatic and quite unrealistic living room situation comedy. The last scenes change a lot in style, theme, character and staging, and help quell the audience when their warmth for the remaining 50 or more minutes deserves a comic denouement.

If this is the debut play by its author, it is possible that narrative elements are not fully in control.
Having said that, the play proved robust, well directed and acted, and staged, and seemed very popular with its first night audiences. The actors and director (Erica Lovell) did justice to fast details and dialogue of the busy script. The stage management device of using wall storage on stage as a bin for props to be put and taken, by the actors, in dimmed light transitions, worked well. The set (Anna Gardiner) used bookcases and display units as cyclorama walls – its used cluttered feel might have been distracting in a drama piece but worked well in this comedy. The lighting (Jasmin Borsovszky) was up to task, although on several occasions orange light, transition pace, and intensity, distracted.

The three actors in particular had lots to do, and were on point throughout. Suz Mawer portrayed the zany friend of Grace with consistent energy – although the call sex scene seemed an over-reach, the show accomplished so much without killed sexuality (this was an issue for the script, not the acting). The two female characters complemented well, and their portrayal keep a dynamic and pace throughout. Joshua Shediak was just right for a mannered, somewhat Anglophile imitation of the bard. Author Madeleine Wirthington shined in the main role of her play, always on pace and with the flow of action and dialogue, with a pitch of youthful enthusiasm to make her character’s nativity and passion believable.

The play resembles and has probably learned from many American TV situation comedy series. This is not necessarily a bad thing, and also not necessarily easy to do. The title of course is a nice twist on one of the most prominent American series. I’m not sure how easy it is to resemble by name an already established commercial show, although in the laneways of Newtown this cute literary signing for a start up independent venture is to be enjoyed.