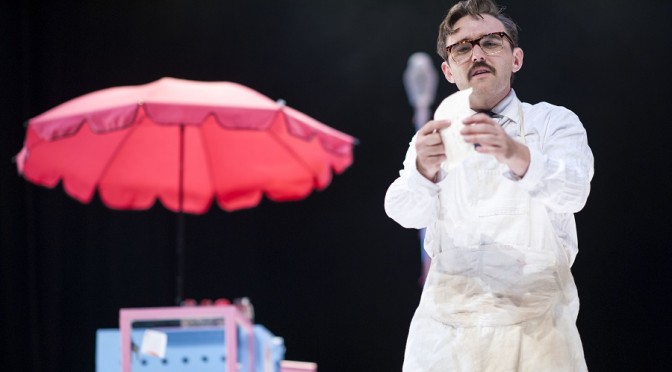 Another excellent Sport for Jove production , performed in rep with ALL’S WELL THAT ENDS WELL, this TWELFTH NIGHT has the atmosphere of a typical 1960’s Aussie summer right on Christmas time …. there is  the feel of a joyous beach party ( think the recent wonderful production of Opera Australia’s ‘The Turk In Italy’) and  water/maritime themes and analogies running through the show.

There is also an ominous side, though, with shipwrecks and the presence of border guards/police demanding passports for example. Another theme is mirrors (a fun sight gag is when Sebastian and Viola as Cesario both put on a white hat as if either side of a mirror and don’t see each other. It is uncanny how alike they look) And a special mention as well for the design elements all of which are well executed

Music also is a crucial part of the production with hits from the Beach Boys , Four Seasons and Roy Orbison amongst others incorporated into the performance. The play itself, was originally conceived as a Twelfth Night Christmas period jaunty entertainment and included several musical interludes which the director Damien Ryan has incorporated with relish.

The complicated plot is somewhat as follows : a tremendous storm and shipwreck sees twins Sebastian and Viola separated with each thinking the other is dead. Viola decides to dress as a man, Cesario , and quickly becomes accepted as part of the Duke of Illyria , Orsino’s , entourage. Orsino is desperately in love with the snappish, elegant Countess Olivia who doesn’t return his love.. Instead , she falls in love with Viola as Cesario , when ‘he’ is sent as unwilling messenger , and meanwhile Viola is in love with Orsino…But eventually hidden secrets are revealed and all put to rights.Sebastian, having met Olivia and she mistaking him for Cesario, sleeps and marries him, is eventually reunited with his sister Viola who is revealed to be a woman and the attraction between her and Orsino is disclosed .

Ryan is blessed with an exceptional Malvolio and Viola/Cesario in particular but the whole ensemble is terrific.

As Viola/Cesario Abigail Austin is sensational. She is elfin and petite , quite a believable debonair young boy/man. No wonder the Lady Olivia is fascinated and the Duke likes him!  A mysterious androgyny clings to both Viola and Cesario. Ryan possibly wanted to heighten the hidden ambiguity, which was so powerful in Shakespeare’s day, when all the players necessarily were men. – meaning a man would be playing a woman, impersonating a man. Confused? Having created her new identity as Cesario , (s)he is lively and spirited yet hides a great loss and a maddening, not to be revealed love. ( Until all is magically made right at the end ,at least for her… ).

Robin Goldsworthy, our Malvolio, is splendid. He is played as a pompous , fussy , obsessive military character ( parking tickets on the ice cream van for example) yet underneath he has a huge hidden heart and he is presented very sympathetically. Goldsworthy  has fantastic comic timing . His mean treatment by, and the ghastly‘prank played by Sir Toby , Maria and the others,  I did not find funny but rather horribly cruel. Others in the audience however found it hilarious. Goldsworthy gives Malvolio a range of elements that delights and overtake us. We are enchanted and mesmerised . His energy ,conviction and range are magnificent .

Anthony Gooley plays the cigar smoking , melancholy Duke Orsino with flamboyance and a touch of arrogance .He can ‘play’ quite dangerous if necessary .

Tall Tyran Parke is terrific as the wise clown Feste, blessed with a sparking wit and a great voice. His finale ‘The Wind and the Rain’ is extremely moving.  A jocular gag was Feste’s teasing of Cesario when, suspecting he is a she, begins to sing The Four Seasons song, ‘Walk like a man, talk like a man’ .

While yes she is in mourning for her brother, Lady Olivia ( Megan Drury) is shown as a modern woman being aware of her present and future options . Drury finds a delicate balance between glamour and absurdity with an assertive confidence in her presence that effectively prevents Olivia’s femininity from ever being seen as weak.

James Lugton as the rather dim , sozzled Sir Toby Belch and his partner in crime Sir Andrew Aguecheek, played by Mike Pigott should also be mentioned .Their foolish antics cause much laughter .

Shakespeare’s TWELFTH NIGHT is a story of love and confused identity set against the backdrop of the 1960’s. With its beautifully detailed ensemble work, the production is very funny as well as being,  at times, deeply moving . A delight.

If music be the food of love play on …

With a running time of 2 hours and 45 minutes,  including one interval, TWELFTH NIGHT  plays in rep with ALL’S WELL THAT ENDS WELL at the Seymour Centre until Saturday Apr 12.

For more information about this production visit – http://www.sportforjove.com.au/theatre-company-plays/twelfth-night-or-what-you-will 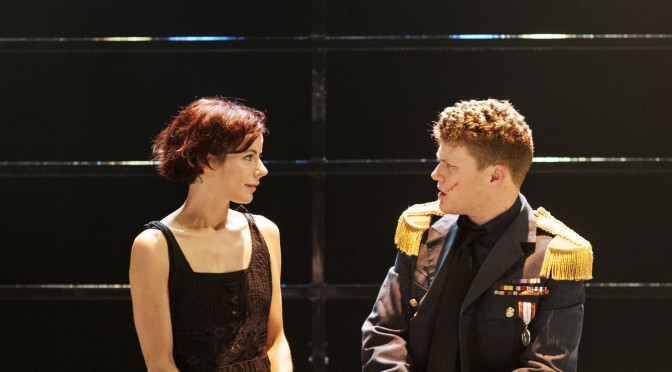 Celebrating its 5th anniversary and Shakespeare’s 450th, this year Sport For Jove brings us a most fabulous production of this lesser known, rarely performed complex and difficult ‘problem play’ by Shakespeare .

The play has a quite improbable, rather dark, implausible plot ( one can imagine it straight out of a TV soap – a desperately ill king healed , unrequited love leading to a forced marriage , a very intelligent woman foolishly chasing – going to extremes even – a man who has nothing but disdain and humiliation for her, a ‘bed trick’ ( recorded on a mobile )and eventually a reconciliation all in times of war. It is both a tragedy and a comedy Under the gripping direction of Damien Ryan and with its very strong, superb cast the audience can focus on the situations drama and story especially of Helena and Bertram and their emotional development. It has been updated with the use of mobile phones etc .Shakespeare’s language is clearly delivered and feels fresh and new.