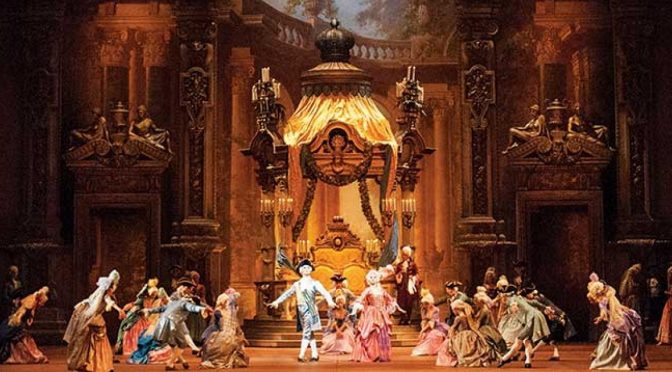 The La Scala Ballet has revived Nureyev’s version of THE SLEEPING BEAUTY , created in 1966 and last seen twelve years ago.
While the dancing was superb, and it is a lavish , extremely opulent production , this reviewer was rather disappointed. It is absolutely crammed full with excessive numbers of dancers at times and the gilded ornate set design is at times way overdone , heavily Baroque . The sumptuous costumes also by Franca Squarciapino ) are at times perhaps a trifle over fussy at times , but in some ways you can see how it is a tribute to Nureyev’s Russian back ground and the traditions of the Marinksy .Aurora’s shell like cradle in the prologue is transformed into her bed in act2 where she sleeps for a century.
Under the energetic and enthusiastic baton of Felix Korobov the Orchestra was in rich, lush form .

The fairies -with their cavaliers , and numerous attendants – were very good but not really that especially remarkable. The ‘canary fairy’ in yellow hovered beautifully and ‘finger fairy’ who twinkled enchantingly were perhaps the most noticeable.

Polina Semionova as Aurora was ravishing .Her opening solos etc in Act 1 were radiant and the Rose Adagio was excellently done with rock solid balances . And she glows in Act 3. (Speaking of the Rose Adagio it is sad that Carabosse malevolently kills all four princes.)

Our Prince Desire, Timofej Andrijashenko was jaw dropping .Tall , blonde and handsome he was magnificent , niftily dealing with all the demanding double tours , jetes etc with great panache , and a gallant partner.
Both had a glorious clean ‘ line’ .The Grand pas de deux at the end with the fish dives etc was regal and polished yet also very tender and joyous.

What is also interesting is that the Lilac Fairy (Emanuela Montanari ) wears a long frock rather than atutu .While she radiates warmth and charm , it does feel rather odd.The confrontation between the two powerful fairies is rather limp , and Carabosse sort of collapses and dies ( ?) but not really dramatically.

With regards to the third act (aka ‘ Aurora’s Wedding’ ) with the fairytale characters … the BlueBird pas de deux was wonderfully danced .The cats however reminded me more of Mungojerrie and Rumpleteazer from the musical Cats.Interestingly there were no ‘Three Ivans’ or Red Riding Hood and the Wolf as there often are.