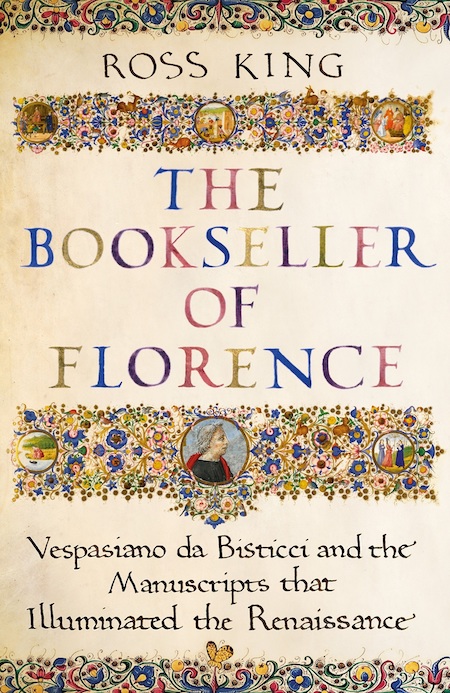 This is a book about books.

Ross King has brought us a densely detailed and layered history of the history of writing, printing and books generally. It is divided into 27 chapters with a table of contents at the front, an extensive bibliography, a collection of footnotes and a well coordinated index. Illustrations are scattered throughout with the major illustrations in the middle. The book is of small to medium size.

Set in Renaissance Florence, King’s book is a biography of Vespasiano da Bisticci, ‘ the king of the world’s booksellers’. He learnt his profession beginning as a book binder and then he opened a bookshop that became one of, if not the intellectual hub of Florence, and, to a degree, Europe – a meeting and discussion place said to ‘contain all the wisdom of the world’.

Vespasiano had a hard working team of scribes and illuminators. (This is the era of exquisite illuminated manuscripts, all produced by hand, which made them very time consuming and expensive). We learn of the history of paper (think ancient papyrus and parchment), the making and the development of clearer easier to read calligraphy, and there are some fascinating digressions into the history of certain words. Before Gutenburg, hand produced manuscripts were treasured sought after rarities, the Urbino Bible produced for the count of Urbino, Federico da Montefeltro, is often regarded as Vespasiano’s masterpiece. END_OF_DOCUMENT_TOKEN_TO_BE_REPLACED