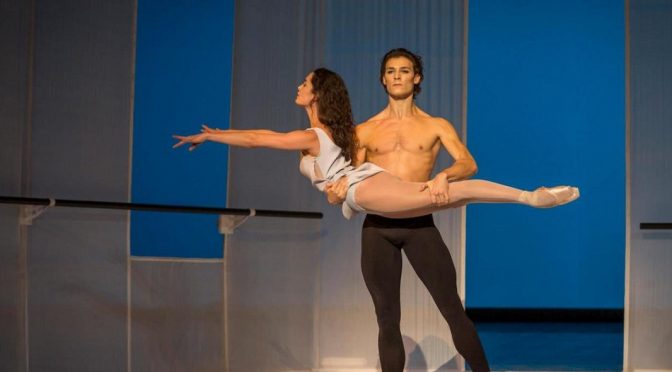 This production in his honour, to mark the centenary of his birth, brings together four works displaying his incredible range and versatility. All pieces are accompanied live by the splendid orchestra of the Paris Opera, meticulously and enthusiastically conducted by Valery Ovsyanikov.

Fancy Free opens the program .It inspired the musical On The Town. Nowadays it could possibly be regarded as quite dated and sexist, but the choreography is terrific.

The simple plot revolves around three boisterous sailors on 24-hour leave in New York City during the Second World War. They get drunk and try to chat up women. The French dancers , who are also splendid actors ,have a wonderful time with the jazz like moves and showy choreography which in some ways is reminiscent of Broadway /Hollywood musicals of the era. Those familiar with Robbin’s work will note the athletic and travelling steps already visible in this rather early work which is trademark ‘Robbins‘ , hinting at works such as West Side Story. END_OF_DOCUMENT_TOKEN_TO_BE_REPLACED