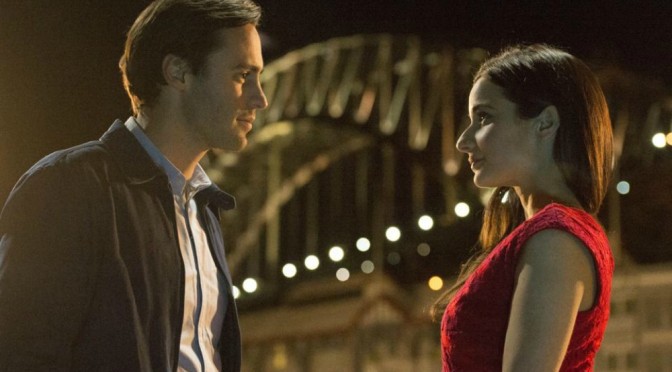 The Australian romantic comedy ALEX AND EVE has had a relatively long life for a homegrown film.  Peter Andrikidis’ film opened in  cinemas at the end of  October and can still be caught on the big screen. The film is still screening at Palace in Norton Street.

If you are planning to make your way across to Palace’s plush Leichhardt cinema complex to see it, my advice is to go with ‘your eyes wide open’. This film charts well worn territory, and the characters are very familiar. There is, however, nothing fresh or edgy about ALEX AND EVE. It’s a kind of Smooth FM radio experience translated to a cinema experience. A plush armchair ride…if that is what you are after…

ALEX AND EVE- the film’s tagline is ‘a mismatch made in heaven’- is yet another variation on the Romeo and Juliet story.

Andrea Demetriades plays Eve, a very attractive Lebanese Muslim lawyer who meets and falls in love with Alex, played by Richard Branctisana, a handsome, charming Greek high school maths teacher. Their two families  are  vehemently opposed to their union. Adding further tension Eve’s family are in the midst of  setting Eve up in an arranged marriage to a Muslim gentleman, Mohomad, played by Hazem Shamma.

There is little joy to be found in the ‘paint by numbers’ romantic comedy narrative.  On the positive side- the film is lovely to look at. The film was shot around Sydney, and we see familiar streets in local areas such as Canterbury, Lakemba, Glebe, Haberfied, Homebush, the Rocks, Croydon, Belmore, Auburn and Leichhardt.

The performances were appealing. It was good to see a large, multi-cultural cast, with very few ‘big names’.

The dialogue- the screenplay is by Alex Lykos, adapted from  his successful 2006 play (Lykos also has a small role in the film)- flowed well, and there were plenty of witty, amusing lines.

In conclusion, the phrase ‘If only’ comes up. If only the producers had chosen not to play things so safe…to make such a pleasing, commercial film, one so obviously geared to the international market with its numerous shots of Sydney harbour, then ALEX AND EVE could have been something special.