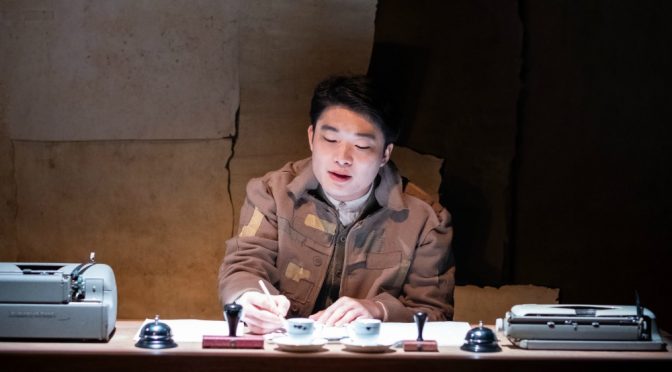 The new play downstairs at Belvoir Street is THE OVERCOAT : THE MUSICAL based on a short story by Nikolai Gogol with a literal translation by Alena Lodkina. The work has been created by Constantine, Michael and Rosemarie Costi.

Gogol’s allegorical tale is about a nondescript looking man, Nikolai Akakievich working in the public service, who resents the drudgery of his job and the ill treatment he receives from his co-workers. He needs a change in his life, He finds this change when he is walking in the city and comes across a clothing store with a very persuasive salesman. The salesman shows him a beautiful overcoat, one that will keep him warm in one of the coldest winters that there has ever been in Saint Petersburg.  He can’t really afford it still he ends up buying the overcoat, using all this savings.

Nikolai proudly shows his coat to everyone and receives a mixed reaction.  Soon a lot of his identity is wrapped around this overcoat. What would happen  if some day he loses his overcoat or it is taken away from him?!

Constantine Costi’s production of this tragicomedy is a strong one. Its useful to read the Directors program note before seeing this production.  One quote: “Surreal, miserable, hilarious and vicious are all phrases we used to describe the motley sea of characters that inhabit this short story. In the eyes of Gogol, they represent the absurdity found in the everyday. Gloomy office workers, corrupt police officers and mindless businessmen are all refracted and stretched by Gogol’s vast imagination.”

The musical genre works well with this piece  with the emphasis on jazz music. Musicians pianist Tate Sheridan and saxophonist Josh Willard  played from seats in the front row stage right with Sarah Evans on double behind them. The songs- music by Rosemarie Costi, lyrics by Michael Costi each help to move the narrative forward.

Recommended, playing as part of the Company 25A season, THE OVERCOAT : THE MUSICAL is playing downstairs at Belvoir Street until I December 2018.