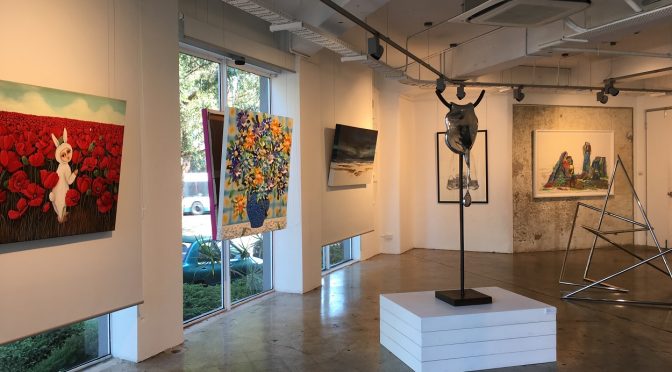 Something for everyone with the current most exciting Traffic Jam Galleries exhibition which has just opened – a show curated from works selected by TJG team members Bianca, Jess, Rebecca and Somerset.

Running from the 5th – 26th of October, the exhibition features new works from artists including Andrew Grassi Kelaher, Claire Kirkup, Danielle McManus, Rebecca Pierce and Nigel Sense. I will concentrate mainly on the new works.

J Valenzula Didi is represented by three abstract, rigidly precisely placed paintings in a triptych work entitled Urban Symphony. It felt like there  were Geoffrey Smart references involved. The use of shadow and geometric line was wonderfully employed, and there was a hint of 3 dimensions in some of the two dimensional paintings.

Ember Fairbairn’s One More Flood was full of lines, dots and misty texture.

Rebecca Peirce’s explosive, colourful, thickly painted flower paintings leaped off the wall. A large, sensitive and passionate, possibly wistful  ‘Somerset Designated Driver’ portrait‘ was new as well as the bright, colourful Low Lying Cloud Over The Glass Mountains and a couple of works from her Simple Life series revealed her extensive range of styles and subjects.

Danielle McManus is represented by her latest adorable but enigmatic work Follow the White Rabbit– a young person in a white rabbit suit in a huge field of red poppies.

Nigel Sense’s ouevre is represented by some of his striking bold flower paintings , perhaps with a Margaret Preston influence?– there is a very strong use of line and colour and outline.

Mia Oatley is represented by two swirling seascapes, and a sleek intense portrait looming diagonally across the canvas ( Forest Woman) .

Dean Reilly’s The Professional Polymath is a striking dreamlike Surrealist portrait of a suite wearing a head of flowers.

Edgar Schilter and Julie Hutchings both have a single work featured in this group show as does Katherine Wood.