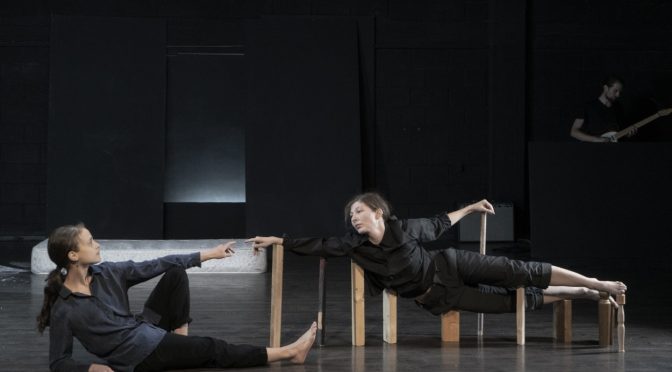 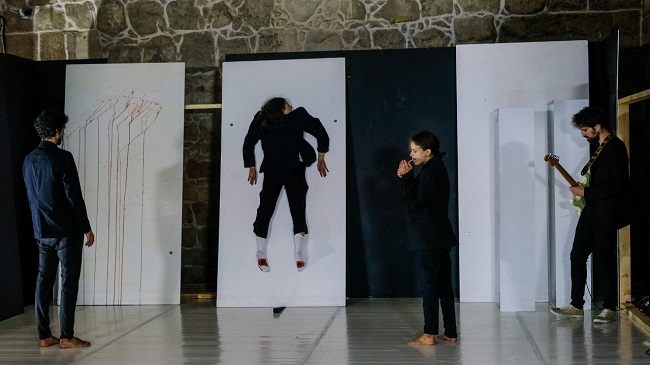 This is the Australian premiere of this work, brought to us from Israel as part of Week 2 of the Sydney Fringe and is presented as part of Global Fringe Gala Week 2 The work won several awards at the Acco Festival in Israel last year, where it was filmed .

Created and performed by Mica Kupfer, with Meshi Olink, Ben Kobi and musician Yaniv Hayoun it examines control and power and questions the blurred boundaries of concrete and abstract, dismantling and construction and asks what is real?

For Australian viewers it has similarities to Tanja Lietdke’s ‘Construct’ – the dancers are at times sculptural, are manipulated and become like pieces of board or wood. Choreographically it also has allusions to Butoh and the circus with the use of stilts.

Short , sharp angular movements are used at times .There is also precise synchronised movement , lots of angular arms and a marching ‘Ministry of Silly Walks ‘ segment as well as twirling a large standing microphone like a baton.

The performers are required to be almost impossibly flexible in some sections. Balance is also important – at one point one of the performers bends over and a board with many tools/blocks of wood is positioned on her back by the other two and teeters precariously.

The set design consists of moveable plinths and boards / boxes that get shifted around giving a very flexible space.

Lighting and sound are very important – breath and heartbeat at times are magnified by the various microphones used by the performers and the contrast between silence or stamping rhythms and the electric guitar is very important.

The wonderful texture of the high brick archway is focused on at one point. There is a large LED clock that runs the whole time and also a TV monitor with a beeping heartbeat measurement line.

The performers mostly wear black casual wear and are barefoot but one strips down and changes to a white floral top with matching socks at one point. The show includes partial nudity.

Visually, two segments in particular are striking – there is the recreation of Michaelangelo’s ‘God with Adam’ from the Sistine Chapel , and the Pieta/Crucifixion scene where one of the performers is nailed to a board after hugging the other two goodbye. This then turns into what could either be an exhibit in a museum , or a crime scene.