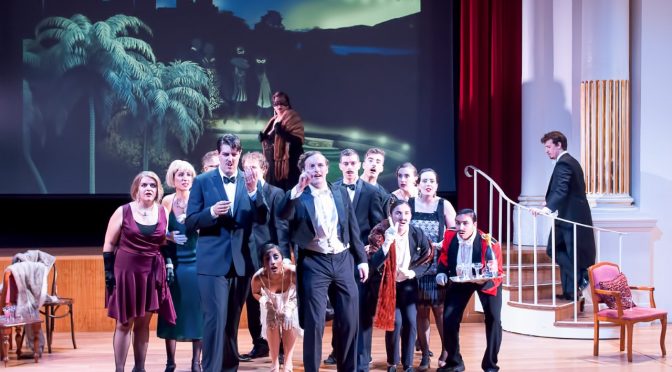 Johann Strauss delicious operetta with its catchy tunes premiered on 5 April 1874 at the Theater an der Wien in Vienna and has been part of the regular repertoire ever since. Opera Australia often perform it on New Year’s Eve as a special gala and/or include it as part of their regular season.

The plot hinges on a glittering masked ball, given by a Russian prince, that brings together all the main characters in various disguises. The three-act journey that leads from boudoir to ballroom to jail provides ample opportunities for farce and humour, but also provides for genuine human emotion and what can be a surprisingly realistic view of urban life. There are lovers in disguise, unfaithful wives and husbands and would be stage struck maids…

Operantics have transposed and updated it to Manhattan New York City in 1929 with a witty, scintillating new translation of the libretto that audiences love.

The plot is basically as follows : Gabriel von Eisenstein is evading prison to attend Prince Orlofsky’s ball, with the help of his friend Dr Falke who secretly bears him a grudge over a misjudged practical joke from years before –   hence the title of the show.

Meanwhile his wife Rosalinde has to reluctantly fend off the advances of a persistent suitor, dashing singing teacher Alfred, and she follows Gabriel to the ball in disguise, planning to catch him out flirting. Adele their maid is scheming too, attending the ball also in disguise in the hopes of impressing a Broadway producer…..

The show was presented as it it was a late 1920’s movie. There was a deft use of projections ( on the back panel) to further enhance the art–deco like set.

The dialogue (recitative) was spoken in English.  The arias /ensemble pieces were sung in the original German with translations as surtitles on the screen –this took a little bit of getting used to but worked ok.

Eliza Grundy’s choreography for the cramped small stage was most effective.

The show was without a live orchestra however the score was presented in a piano version , magnificently played by Nathaniel Kong and precisely, delightfully conducted by elegant, energetic Keiren Brandt-Sawdy.

Vocally the opera was splendid with some magnificent performances, especially from the four leads. The chorus had a great time and were impressive too.

As wealthy man-about-town Gabriel von Eisenstein, Michael Handy was a caddish, rather sleazy man who dithers at various points. He was in splendid voice giving a very polished performance. His duets with Rosalinde at the ball and she was masked in disguise were glorious.

His unhappy wife Rosalinde was terrifically sung by Jessica Harper who was in thrilling voice. She has great fun teasing Alfred and Gabriel. She suffered from self-deceiving hauteur and could be bitchy in her interactions with Adele yet positively charming to everyone else. Was she really in love with Alfred ? Or Gabriel ? Her show stopping aria in disguise, as a countess at the ball, when she sings the “Czardas”, her set piece in the second act , (“Klänge der Heimat”/”Songs of My Homeland”) had the audience at her feet in raptures and brought the house down .

As Adele, Amy Balales is superb. In her black short sexy chichi French maid outfit in the first half she is stunning – and such glorious long legs. And then she is in a long green gown for when she is in disguise at the ball. Her ‘laughing song’ (“Mein Herr Marquis”/”My lord marquis) at the ball was a showstopper and she absolutely wowed us and Frank with “Spiel’ ich die Unschuld vom Lande”/”If I play the innocent country girl “ displaying her ravishing thespian talents.

Dashing tall , dark and handsome yet rather louche Alfred is gloriously sung by Spencer Darby.

Tristan Entwhistle as Dr Falke has the vocal presence ensuring all eyes and ears are drawn to him as he masterminds his revenge.

Prince Orlofsky (should that be Princess?!)- was played with charisma by cross dressing Laura Griffin as a White Russian plutocrat who suffers from ennui. The Prince  presides over a sort of multi-sexual post-Mardi Gras  party, rendered furtive by everyone’s adoption of assumed identities.

Even though there is an exuberant full cast champagne chorus finale  we do get the feeling that the Eisenstein’s rocky marriage will more than likely disintegrate, and that  Adele will follow her dream and become a stage star…

This Operantics production was a lot of fun and featured some great music.  DIE FLEDERMAUS played the Independent Theatre  between the 20th and 23rd April.