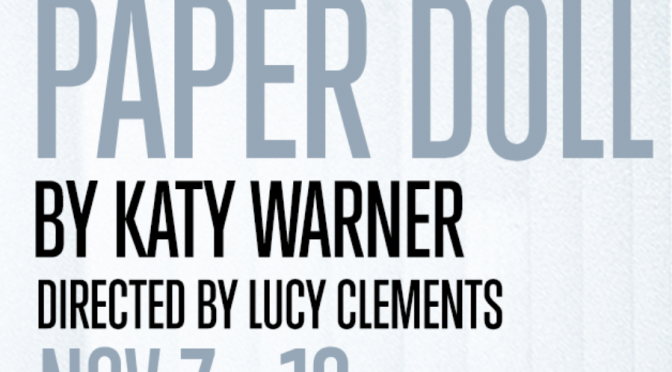 The atmosphere of menace that pervades PAPER DOLL playing at the Old Fitz Theatre is entirely repellent … and engrossing.  This is 40 minutes of required viewing. This is 38 minutes of very uncomfortable viewing… I can’t speak to all of it.  There were a couple of minutes that I just couldn’t watch.

Required viewing because it is one of those rare events when stars align.  Extraordinary cast, writing of the highest calibre (Katy Warner) , an intimate space and direction which contains and controls a theme that we see way too much of.

He arrives wet from standing in the rain, he may have forgotten how to get a cab.  Like her, we want him to dry off and be more comfortable.  He seems like a nice bloke in fact, a bit lost perhaps.  He doesn’t have anywhere else to go and she says that she couldn’t let him be homeless.  She has a kind heart.

Why then is she so skittish? Why so discomforted? And why such strong body language to keep him at a distance?

PAPER DOLL brings lots of questions to mind.  It has a simmering mystery at the beginning, a femaleness of bewilderment and fear in the middle and concludes with interrogations of visceral import.

Martin Ashley-Jones is the man in this two-hander and Lucy Goleby is the woman.  They are a stellar pairing.

Ashley-Jones is at once empathetic and repugnant.  He pulls our sympathies to him as he, bedraggled and obviously highly emotional, initially seems vulnerable and contrite. Convivial too.  He might be fun to have a beer with.  Ashley-Jones often delivers the dialogue with a fractured, staccato feel that makes him flawed and unsure in spite of himself.  Yet he also endows the man with that assertive maleness of the instinctive manipulator.  He wheedles, he gets hurt and sad and he prods with shared history.  He’s big, too, with the pointed finger as he walks unthreatingly towards her.

Lucy Goleby moves around the small stage with the edgy, flight-redolent fear all women know.  She is polite, she is a nice girl.  A good girl.  The shame and guilt seem all hers as memory teases action with the balled up ghost of a past that she knows she has not come to terms with.   Goleby seethes with the rage of all women and we wait for it to explode.  It comes close, upstage in the shadows, at one stage but Goleby brings the woman’s struggle to surmount her conditioning to the fore and we are denied the release of anger.  Her subtle characterisation has the human failings of every person there.

There are so many compelling aspects to the direction of this piece. (Lucy Clements) The use of gaze is very powerful, he looks at her as she skitters away from him. She often peeps rather than meeting his male gaze but when she consistently eyes him towards the end of the piece… wow.  Every beat has been interrogated and found whole.  The tension of the work is so well created.  It’s creepy.  Despite being well lit in the centre, there are glooms to seek solace in.  The audio track is heart-breakingly good.  It punctuates the high drama moments and underlies the instability outside the room for the whole show.

And the theme.  That was my pervasive question.  Why do we need to see this on stage again?  There was a time a few years ago when every show seemed to address it somehow.  Isn’t the consciousness raising done?  This was the discussion I had with my female friend as we waited for our mate to order his sweet potato fries after the show.  When he came back … it was on!!

“I trust him” was our friend’s opening salvo.  Shit hit the fan then and voices were raised.  He’s no fool and when we saw BLACKBIRD together I also spent a lot of time with my face buried in his shoulder.   Yet he still required some serious education, and we were just the women to give it to him.   He wanted to put a costume of his own choosing on the woman, he wanted princess and wolf, he wanted quantifiable reasoning and pure outcomes and, sure, there is a place for theatre that can give him that.

But PAPER DOLL is next level thinking, this is advanced citizenship.  This is required theatre-going.

For more information and tickets : 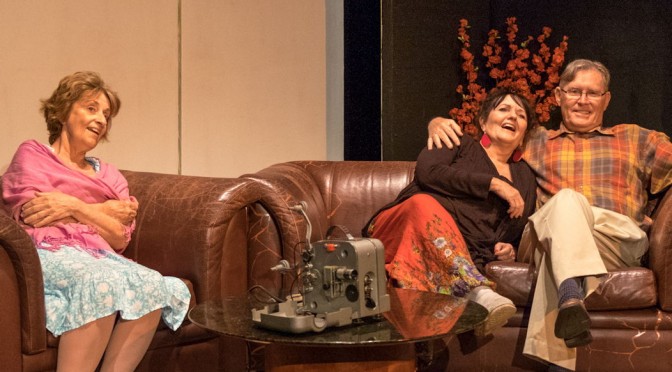 The play starts with very happily married couple, Eva and Jim Rogers, sharing their never ending, eternal love story. Both are in good health. There is definitely no rush to complete their bucket list.

In the second act, immediately reminded of the play LAST CAB TO DARWIN, but very passionately presented from a very different point of view, and imminent death becomes a much more complicated issue.         END_OF_DOCUMENT_TOKEN_TO_BE_REPLACED 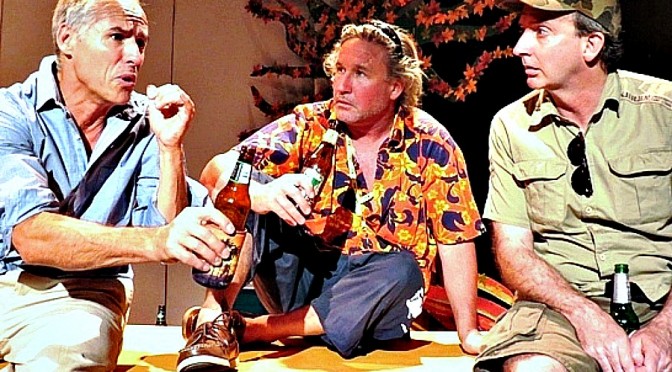 The show opens and we see film of three friends on their long hike to the remote site which then leads to their live appearance on stage. Their emergence  is heralded with a clever soundscape including kookaburras guffawing. Weber’s marvelous set design includes a bush track with leaves, tree stumps and panels at the back acting as a projection screen. END_OF_DOCUMENT_TOKEN_TO_BE_REPLACED