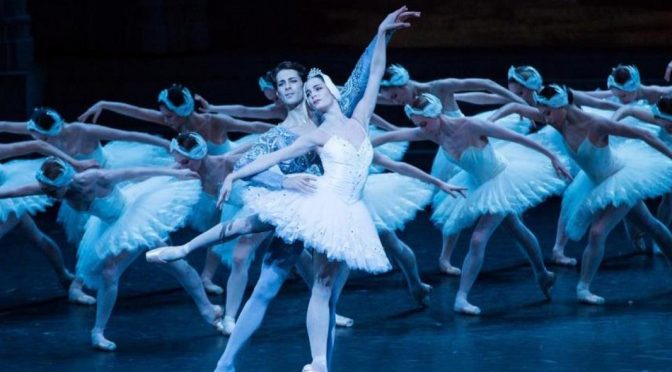 Swan Lake is one of the most loved and iconic ballets .As part of the Palace Opera and Ballet season, this is a very strong revival of the 1984 version by Rudolf Nureyev .

Nureyev uses as a basis the ‘traditional ‘ Petipa/Ivanov choreography ( especially for the ‘White’ Acts 2 and 4) to a degree, but with a twist and extra flourishes and additions of choreography . It is spectacularly staged with dark russet colours and gold for the court scenes of Acts 1 and 3. The ‘lake ‘ is simply staged with a low ramp of steps and a very atmospheric use of projections. Costumes (Ezio Frigerio who also designed the sets) are lavish, opulent and exquisitely detailed.

This version is quite dark and can be read as Freudian, especially in the relationships between Siegfried, his Mother and the tutor Wolfgang/Von Rothbart . Everything apparently is in Siegfried’s mind ( the ballet opens with him asleep in a chair – is everything a dream ?) .In Act 1 in particular Nureyev has added a lots of extra fiddly, fancy, almost Ashton like footwork for the dancers . Throughout the work there is more emphasis on the male dancing with the male roles expanded (especially for Siegfried and Von Rothbart, but also in Act1 for example with the huge corps de ballet of male dancers having their set piece ensemble with the polonaise). The mime for Odette telling Siegfried of her story and warning him of the spell is retained from a previous Royal Ballet version.

The national dances in Act 3 are performed almost right at the start of the Act – in this version they are welcome expected guests and not Von Rothbart’s uninvited ‘creatures’.

The six princesses Siegfried is required to choose from are (as is common in quite a few versions) in very similar dresses in shades of dusty pink and carry rather distracting gold fans shaped like mirrors.

Rather than the ‘traditional’ ending, here it is far darker, with Siegfried collapsing (dying?), Odette transforming into a swan and being trapped in the spell forever and Von Rothbart, having transformed back into his bat/birdlike form, triumphant.

Only major companies like the Paris Opera can field such a HUGE cast – over 30 swans! and a corresponding number of male corps de ballet. Sometimes – eg for the large court ensembles in Act 1 and the swans – emphasis is made of the lines and criss-crossing blocks of patterns of the choreography (sometimes shot from a high aerial view so we can see them). The swans in the white acts breathe and pulsate as one.

As Odette/Odile Léonore Baulac was excellent displaying superb dancing. As Odette the Swan Queen she is all delicate birdlike and fluttery at first, regal yet softly lyrical and protective of her entourage, most unwilling to trust Siegfried at the start but comes to place her whole world in his trust. As Odile in Act 3 she is smiling, seductive and charming, sparkling and spinning, at times crisply mocking Odette.

As Siegfried handsome Germain Louvet was terrific, in fine form. Siegfried is presented as young , impetuous and romantic.  Technically his dancing is glorious -marvellous epaulement and flowing princely ‘lines’. He is shattered when he realises he has unwittingly betrayed Odette. Their partnership as Odette and Siegfried was delightful .

Francois Alu as Wolfgang the tutor/Von Rothbart gives a great performance. As Wolfgang he is slimily charming. What is interesting is that in Act 3 as von Rothbart he does not wear a mask or anything so that his alter ego is concealed (yet he wears a cap in Act 4 when far more bat/birdlike ).As Von Rothbart (in black , sometimes with , sometimes without , a large black fluttering trailing billowing cape) he is sinister, smiling and manipulative .In Act 3 Nureyev has added a flashy dashing showy solo for him .

Musically the Orchestre de l’Opera national de Paris under the baton of maestro Valery Ovsyanikov was glorious, giving a magnificent reading of the lush, dramatic and romantic Tchaikovsky score.

Running time 3 hours including one interval .

The Paris Opera Ballet in Nureyev’s Swan Lake screened at selected cinemas between the 12th to the 17th April 2019.