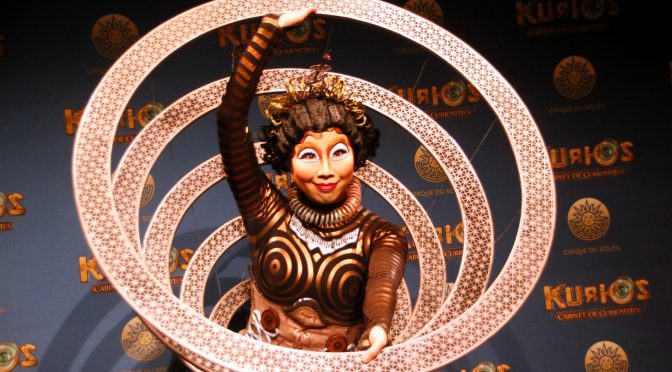 Despite the fact that Cirque Du Soleil’s KURIOS doesn’t premiere in Sydney until the 2nd October at the Entertainment Quarter, the promoters arranged a media call today with two of its star performers in attendance in full costume and makeup.

It has its headquarters in Montreal, sprawled over five city blocks, and is the largest live entertainment company in the world.

As well as several permanent residencies in Las Vegas and Florida, Cirque Du Soleil has approximately 25 other circus shows on the go, which has enabled it over the years to have visited 60 countries.

Emphasising the employment of many local tradesmen (for example in the ten day construction of the Big Top), furthermore it did not use any grid electricity but only drew on Sydney’s water supply.

Julie De Simone, head of wardrobe, stressed the high maintenance needed to keep the costumes in sparkling and fresh condition and in good repair for each vigorous performance.

The touring company itself has four seamstresses and draws on another four in each city that it visits.

The show itself owes much to the imagination of Jules Verne and the visual genius of pioneering French filmmaker Georges Melies.                  END_OF_DOCUMENT_TOKEN_TO_BE_REPLACED