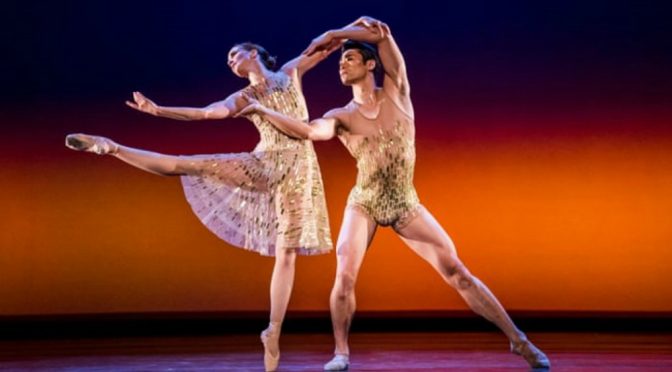 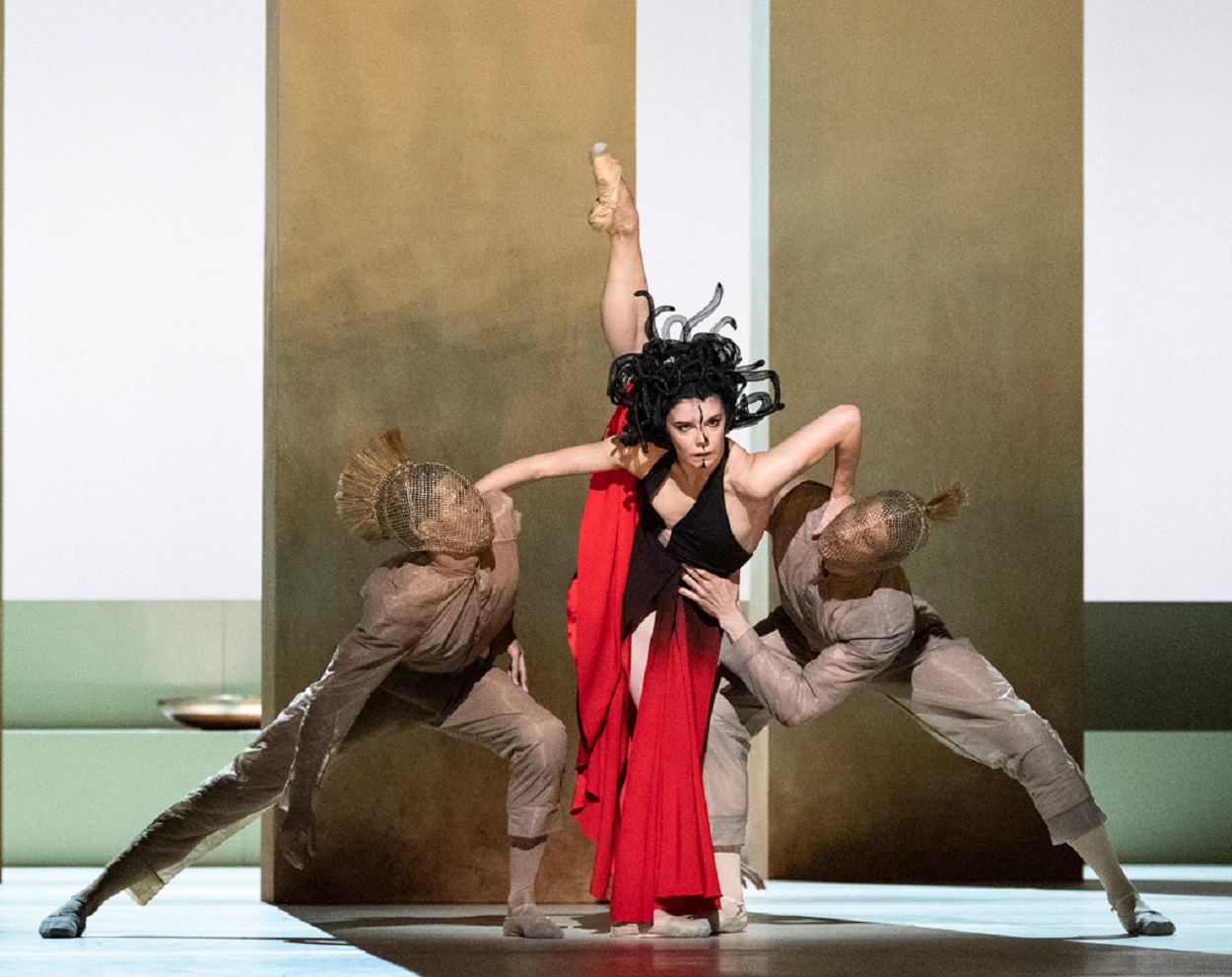 As part of ROH Live screenings , we were privileged to see a most intriguing contemporary triple bill superbly danced by the Royal Ballet – Christopher Wheeldon’s ‘Within the Golden Hour ‘, Crystal Pite’s ‘Flight Pattern’ and ‘Medusa’ , a new work by Sidi Larbi Cherkaoui.Two revivals and a world premiere .

The programme opened with a glorious revival of Wheeldon’s ‘Within the Golden Hour’, created on San Francisco Ballet in 2008 and first performed by the Royal Ballet in 2016. It is abstract yet lush, shimmering and exquisiteLY redesigned with semi transparent golden , floaty costumes by Jasper Conran .

Wheeldon acknowledges he was influenced by Klimt’s ‘golden period’ in creating the ballet , and Australian audiences might think of Kristian Fredrikson ‘s costume designs for Graeme Murphy’s ‘Shéhérazade’ . Peter Mumford’s lighting is splendidly enhancing and atmospheric with most effective use of shadows and silhouettes Ezzio Bosso’s ‘Music for Strings’ throbs and glimmers, blending towards the end to the andante from Vivaldi’s Violin Concerto.

There are seven pairs of dancers who come together in assorted combinations. Wheeldon’s athletic ,challenging choreography is fluid and sinuous and includes difficult high lifts, slithery floorwork and male pas de deux as well as possible references to Latin-American ballroom.

It also requires a long , stretched ‘line’ and big showy jumps at times particularly for the male dancers. The first section for the whole ensemble sees them writhing sculpturally. Then there are assorted pas de deux and other combinations : for example a tender, fragile ,dreamily lyrical pas de deux and a darting dragonfly like female quartet which are contrasted with a coolly elegant and regal pas de deux by another pair of dancers.

Towards the end the dancers cascade off the stage, then return for the final short segment and are still dancing when the curtain falls.

The middle work was the hotly anticipated world premiere of ‘Medusa’ by Sidi Larbi Cherkaoui with Natalia Osipova in the eponymous role. While Osipova was sensational , it is perhaps slightly disappointing .This is Cherkaoui’s first commission for the Royal Ballet. The music blends Purcell arias at times ironically commenting on the action with the atmospheric ebbs ,flows and bumps of electronic composer Olga Wojciechowska .

Based on the story from Ovid’s Metamorphoses , the ballet tells the story of how Medusa was a beautiful priestess who was dedicated to and served in the temple of the goddess Athena .Medusa was raped by the god Poseidon, and a jealous Athena took revenge by turning Medusa (one of her favourites) into a monstrous creature, a hideous Gorgon with writhing serpents for hair. Anyone who looked Medusa in the face was instantly turned to stone, until Perseus succeeds in killing her which sets free her soul transformed back to beauty.

Osipova tries to depict both sides of Medusa – the stunning priestess, who offers a scarf as a good luck token to Perseus , and the furious Gorgon, with fierce kicks and a basilisk stare. While the ‘snaky’ headdress is rather striking it is not scary rather just looks messy, somewhat of a disappointment .

Olivia Cowley was coolly elegant as Athena who punishes her acolyte because she can’t punish the god. Ryoichi Hirano in an asymmetric indigo kilt like outfit ( Samurai inspired.? ) and dramatic blue stripe was commanding as Poseidon who calmly observes Athena’s punishment of her priestess. The transformation is achieved behind a huge scarf, (The scarf is a recurring visual motif – we see Medusa with one at her first dance with Perseus, her transformation, and her death).

The soldiers – Perseus et al – are led by tremendous Matthew Ball but hampered by the rather discordant ,unflattering semi transparent boiler suit costumes. Other soldiers wear mesh fencing masks made to look like stone , with plumes resembling Ancient Greek helmets, their faces hidden. Perseus removes his at one point – does Medusa recognise him? Does he recognise her? It is suggested that Medusa lets Perseus kill her so her soul can be free,
The ending is rather enigmatic and inconclusive  with Medusa transformed back to her beautiful self and on the temple steps with her bowl .She is sad and reflective.

Crystal Pite’s ‘Flight Pattern’ is stark and bleak but very moving. The dancers are all in grey costumes and often move in surging , pulsating patterns,  at times like flocks of birds . To Górecki’s haunting Symphony of Sorrowful Songs Pite has produced a work inspired by the world wide refugee crisis , motherhood and loss. It is mostly a huge ensemble work (36 dancers in the cast!) who writhe, leap ,fall, but we occasionally see churning individuals break out from within the group, all harbouring their own sense of loss, destroyed hopes and other back stories. Towards the end we see one couple , Kristen McNally and Marcelino Sambé,, who have already lost their baby.

McNally mourns in anguish. to the lament of Mary on the death of her son (sung by soprano Francesca Chiejina). McNally also has to symbolically bear the weight of everyone’s loss, as represented by the huge, heavy load of coats that end up piled in her arms. Her partner Sambé explodes in a solo of feverish anger.. The black walls of the set open to let the crowd of refugees in, but close to exclude the couple. McNally rocks back and forth, lamenting. Snow is continuing to fall behind the wall and now the refugees no longer have their coats. Have they reached their destination? The ending is inconclusive. A melancholIc, poignant work.