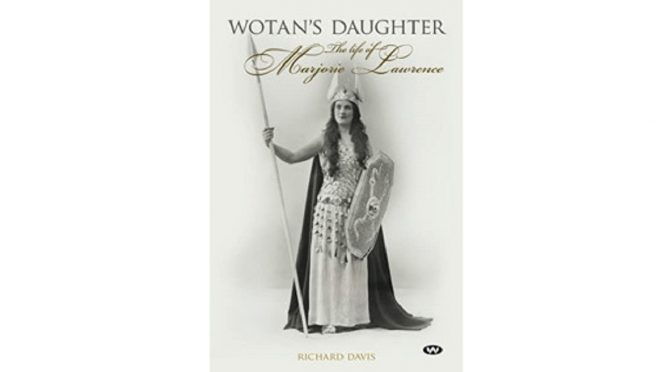 WOTAN’S DAUGHTER : THE LIFE OF MARJORIE LAWRENCE by Richard Davis is a captivating biography of Australian operatic megastar of the 1920’s and 30’s Marjorie Lawrence, The book, a new revised updated edition of the 2012 version is of small to medium size and not too thick and is divided into twenty chapters with a preface, two forwards , an appendix , footnotes , bibliography and index . Illustrations are in the middle It is written in a warm yet respectful tone and meticulously researched.

It is a story of fame, adversity and resilience.Lawrence rose to become one of the major Wagner singers of her generation, feted and thunderously applauded in Europe and at the Met Opera in New York where she shared roles with the renowned Kirsten Flagstad. Afflicted by polio at the height of her career, Lawrence fought back heroically against her physical disability and prejudice to rework her ravaged life and return to the stage.

We follow Lawrence’s life chronologically. She was the second daughter, one of six children, known as “Marge ‘, born in 1907 in Dean’s Marsh, then sort of rural Victoria. Her early life is discussed – her mother passed away when Lawrence e was very young and she is sent to live with her grandmother but recalled back to the family home where we learn about he childhood , learning to ride – and the serious discovery of her Voice when Lawrence was about sixteen ( she had already been in the school choir). She was advised to go to Paris but her father was furious … at eighteen with the help of her brother Percy she escapes to Melbourne.

First Lawrence studies with Ivor Boustead, one of Melbourne’s top singing teachers. In 1928 Lawrence won both the Sun Aria and scoops many other sections of the Geelong Competition and eventually moves to Paris for her vocal studies .She becomes a pupil of Madame Gilly , as organized by Boustead and Aussie singing sensation John Brownlee, It is a major culture shock at first but Lawrence adjusts and grows to love Paris. We learn of the various roles Lawrence studies and the auditions and performances she gives and the amazing range of her voice .There is backstage shenanigans at the Paris opera . Lawrence dashes between Paris, Nantes and Monte Carlo and is a sensation wowing the critics and audiences . Also Lawrence has various romantic entanglements with her male costars. Her brother Percy , also living on Paris , changes his name to Cyril and becomes her manager and at times interfere with his sister’s private life. Some early recordings Lawrence made are discussed and we follow her zooming around giving performances.

We also learn of the rise of Kirsten Flagstad. END_OF_DOCUMENT_TOKEN_TO_BE_REPLACED