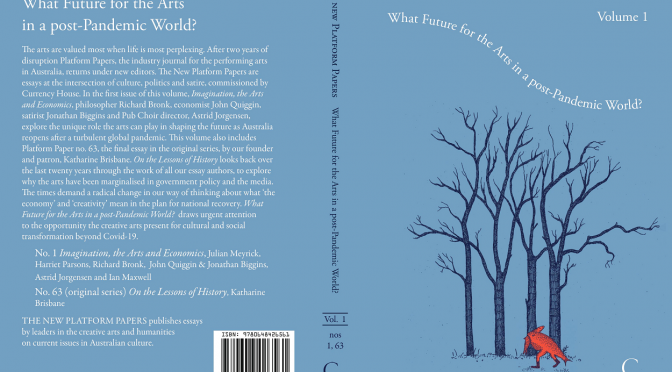 This is the first of the New Platform Papers from Currency House, a continuation in a slightly different format of their wonderful Platform Papers series. A new series , annual rather than quarterly, is launched with a new editor,Julian Meyrick , Professor of Creative Arts at Griffith University . Following the retirement of Katharine Brisbane in 2018, the new Director of Currency House is Dr Harriet Parsons, her daughter.

This particular volume is based on a Convention of former Platform Paper authors hosted in July 2020 by Currency House and the University of Sydney .They were invited to gather and reflect on an important current topic. It is planned that the Authors Convention and the concluding publication in December will become an annual event. It is envisaged that the Platform Papers, previously heavily focused on the performing arts , will now include the arts world more broadly.

This volume is a challenging look at how the arts can shape our future by combining economics and the creative imagination, showing how the arts are essential to society and the economy yet the funding is atrocious and many arts workers are burnt out .
The authors for this issue are philosopher Richard Bronk, economist John Quiggin, multi-talented actor and satirist Jonathan Biggins, Pub Choir (now Couch Choir) director Astrid Jorgensen and others.

Harriet Parsons has written the introduction, looking at politics and arts funding , how the government has in effect ignored the arts and slashed funding drastically since the 1980’s ( even with Keating ). She asks how can one measure the arts? She then introduces the various articles included as inspired by the convention , a lot of which is based on Richard Bronk’s The Romantic Economist of 2000.

The first article is by Bronk- Models, Uncertainty and Imagination in Economics .In it Bronk examines the mismatch between the way economists model economies and the way market investors work in practice .He quotes from several Romantic poets .Bronk looks at economic theories , considers the possible future and the use of different models and metaphors by entrepreneurs , investors and policy makers and how these affect the arts. Bronk stresses that the Romantic conception of imagination also fosters empathy . He also mentions Beatrice Webb’s ‘analytical imagination ‘ .

Next is a discussion between Jonathan Biggins and John Quiggin , entitled What’s Wrong With Cannibalism ? Their conversation looks at the ‘invisible hand of the market’, with market economies flourishing through the pursuit of self interest .Bernard Mandeville’s The Fable of the Bees is used as a basis for the article which also examines how Keynsian economics disintegrated in the 1970’s and how the use of the internet has changed things. They also consider Keating’s policies. In the 19th Century there were two kinds of artistic reaction to change – on one hand you have the Pre-Raphaelites rejecting change while others like Oscar Wilde and William Morris embraced change and said right, let’s see what these new machines can do . Three things have shifted things away from Hayek-Friedman : the 1990’s dot.com bubble bursting , the 2007 Global Financial Crisis and now the Covid pandemic. The two also discuss the rise of household debts , Quiggin proposing an adjustment and a return to a pension/benefit that people can actually LIVE on .

Bernard Mandeville’s The Fable of the Bees , or Private Vices Public Benefits is reprinted in its entirety followed by the gruesome satire by Jonathan Swift A Modest Proposal For Preventing the Poor People of Ireland From Being a Burden on Their Parents or Country and For Making Them Beneficial to the Publick.
The next article is by Astrid Jorgensen – You Can Sing , looking at music education .Yes , almost everyone can sing ( if badly ) – music defines our lives. Jorgensen looks at music education and how singing is good for your health. Jorgensen ended up becoming director of Pub Choir which because of Covid is now Couch Choir at the moment .The future is uncertain but they want to continue.

Ian Maxwell then reports overall on the author’s convention , and how arts people are underpaid , drained and exhausted .Four main issues arose from the Convention- 1.The fundamental nature of arts and culture and how governments don’t understand this , Mention is made of David Pledger’s arts ‘operational synergies ‘. 2.The missing capital ( as in money) .Why have the arts been sidelined ? .3. Exhaustion. 4.Competition for resources.

This volume also includes the final essay in the original series, No.63, by its founder and patron Katharine Brisbane. Her On the Lessons of History considers two decades of Platform Papers , reviewing the outcomes envisaged by the 62 past Papers since 2004, and asks why the arts and humanities have become so marginalised in government planning. On the Lessons of History considers the history of Currency House, the topics of the individual essays and the developments that have taken place in the arts in Australia over the last twenty years.

What Future for the Arts in a post-Pandemic World?

Australia’s leading journal for the performing arts has defied two years of disruption – and an  apparent hostility towards the arts – to launch a newly expanded series under a new editor, and a new annual volume of essays on how the arts can shape our future by bringing the creative  imagination and economics together.

The Authors Convention and its concluding publication in December will become an annual event.

This volume also includes the final essay in the original series, No.63, by its founder and patron  Katharine Brisbane. On the Lessons of History looks back over two decades to review outcomes  envisaged by 62 past Papers since 2004, and asks why the arts and humanities have become so  marginalised in government planning.

“The times demand a radical change in our way of thinking, particularly about what the  economy and creativity mean in a plan for national recovery,” says the new NPP General  Editor, Julian Meyrick, Professor of Creative Arts at Griffith University.

“What Future for the Arts in a post-Pandemic World? demands we take up the opportunity  for social and cultural transformation that lies beyond the COVID pandemic.”

Currency House also announces a major increase in fees to the writers of its two annual NPPs, at  $14,250 for each 15,000-word essay. Proposals for the July 2022 issue are now invited.  Following the retirement of Katharine Brisbane in 2018, the new Director of Currency House is Dr  Harriet Parsons, her daughter.

“Both Harriet and I are concerned with the connections between art forms and the bigger  policy picture in which arts and culture are immersed – an enlarged perspective perfectly  expressed in the vision, lateral thinking, and wit and whimsy of the contributions to this our  first New Platform Paper,” says Meyrick.

“Rethinking the Papers, making the series anew, is essential as artists and companies face the  digital, social, financial, ethical and personal challenges of the post-pandemic world.”

Richard Bronk is a leading academic and author, best known for The Romantic Economist: Imagination  in Economics; John Quiggin is Professor of Economics at the University of Queensland; actor and  director Jonathan Biggins is well known as a satirist; and Astrid Jorgenson is founding director of  the Pub Choir and, during lockdown, the online Couch Choir.

New Platform Paper Vol. 1 in shops and on sale ($32) from December 1  at https://www.currency.com.au/ (click Currency House Callout in menu)