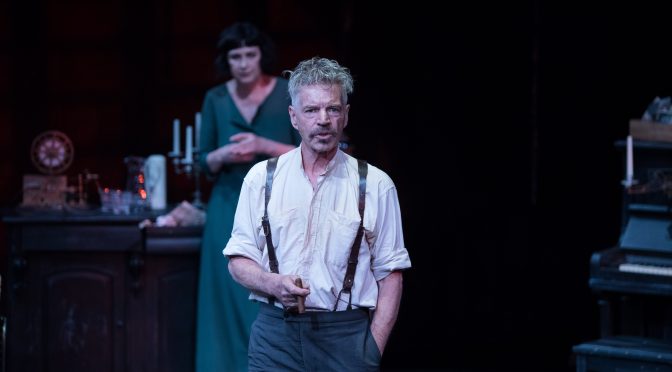 This is not the first time Judy Davis and Colin Friels have had an encounter with August Strindberg. In 1983 at the Old Nimrod Theatre (now the Stables Theatre) they performed together in Miss Julie. By all accounts it was a scintillating production. In 1984 they were married.

In the Director’s Note in the program, Davis states that Strindberg broke away from his idol Ibsen by refusing to put social issues into his plays and indeed THE DANCE OF DEATH has no overt political issues. However, there is a commonality between Ibsen and Strindberg and indeed with Anton Chekhov’s Uncle Vanya, where there is an oppressive sense of entrapment.No doubt the gloomy and harsh winters in those northern countries contribute to the claustrophobia that inhabits works by these playwrights.

Brian Thomson’s set literally traps the performers by creating a moat encircling the stage backed up by dark hued walls and occasionally a  lit window that looks like a prison grate. Needless to say this moat is actually a symbol of the ocean surrounding the island upon which the protagonists live in isolation and bitterness.

Colin Friels plays Edgar, a military captain in charge of a garrison on the island, but whose career has stalled. Alice says that she thinks he doesn’t value anything but rifles. She says he doesn’t believe in rules, that he lives outside the rules. That he sinks his claws into people like a vampire and ‘sucks the blood out of you’.

Pamela Rabe plays Alice, his wife of twenty five years, who is embittered by the fact that their marriage thwarted a promising acting career.

Edgar describes his wife as ‘a despot with the soul of a slave’. He abuses Jenny for yawning in his wife’s presence.They constantly fight and the menace of violence hangs in the air fueled by Edgar’s alcoholism.

Into this maelstrom of acrid emotions strays Toby Schmitz as Alice’s cousin, Kurt, who promises some sort of escape for, on the one hand, Alice and on the other hand, Edgar. The more Kurt tries to mediate and bring peace to this warring couple, the more he is dragged into their vortex, an emotional wasteland. He also has to tarry with the sexual interest which Alice bestows on him. Kurt constantly refers to the uncomfortable feeling he gets being in their home.

Colin Friels is wonderful as Edgar. He can play drunken rage and a violent temper but can then slip effortlessly into an almost endearing vulnerability due to his failing health.

Pamela Rabe also brilliantly displays both a visceral hatred and scorn towards her husband tempered with concern for his well being.

Toby Schmitz  as Kurt must portray an almost gradual descent into a kind of delirium and madness and he does so with ease.

Mention must also be made of Giorgia Avery who does well in the role of Jenny the put upon maid of Edgar and Alice.

Davis as director has wrung dynamic yet nuanced performances from her cast. We watch as this trio of misery continue to play cruel tricks on each other. The cruellest trick of all as far as Kurt is concerned is that Edgar and Alice love to be in almost mortal combat with each other – the dance of death of the title.

Amidst all this loathing and despair Davis has found some moments of humour perhaps aided by the masterful translation of this play by May-Brit Akerholt. There is a scene between Alice and Kurt where Alice exclaims ‘but I am an actress’ drawing laughs from the audience.

As the play unfolded, with some of the scenes, with the characters displaying their vitriol, one didn’t know whether to laugh or to cry!

To heighten the tension of this play fight coordinator Nigel Poulton choreographed a thrilling sword fight between Edgar and Kurt.

Paul Charlier’s edgy, atmospheric, immersive soundscape was a great highlight of this production…so many sounds incorporated in the mix from instrumental to jolts of thunder to gunshots in the night and more.

Costume designer Judy Tanner clothes the cast in what appears to be authentic nineteenth century costumes. Pamela Rabe goes from wearing a dowdy housewife dress to a vampy, shapely vivid red gown. Colin Friels has a similar range of costume from dishevelled, ragged clothes to a smart and colourful military uniform complete with high boots, sword and scabbard. Toby Schmitz makes an impressive entrance in white tie and tails which he sheds to a blowsy shirt and pants.

To match the emotional storm in the interior of this play lighting designer Matthew Scott complements this with lightning bolts symbolising the raging tempest enveloping the island.

There’s no slow dancing in this production. This was raw, confrontational drama performed at a high pitch by the cast. THE DANCE OF DEATH is playing at the Belvoir street theatre, 25 Belvoir Street, Surry Hills until 23 December 2018. 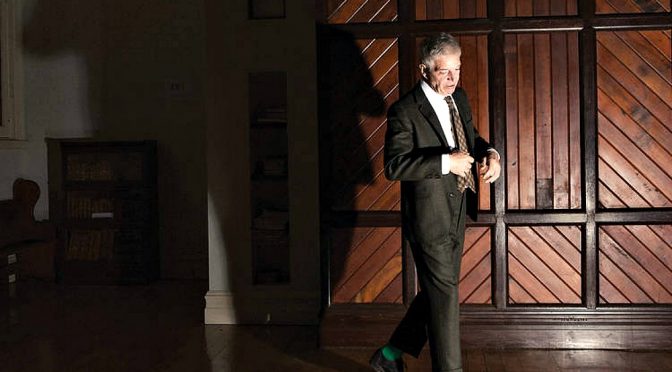 Irish playwright Brian Friel (1929-2015) wrote this play during the troubles in 1979 when families were in tremendous stress. This family is under the stress of a barely  subsistence,  nomadic lifestyle, playing in decrepit halls and dingy churches in the poor backlots of Scotland, England and Wales and finally back to Ireland where Frank was born. END_OF_DOCUMENT_TOKEN_TO_BE_REPLACED 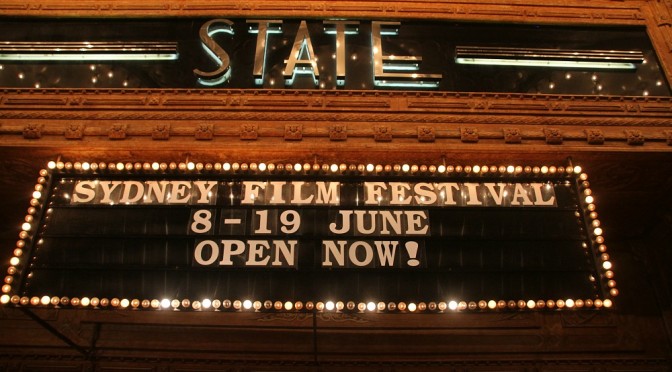 Sydney Film Festival Number 63 has come and gone again for another year. The Festival attracted many celebrities. These are some of my favourite pics. 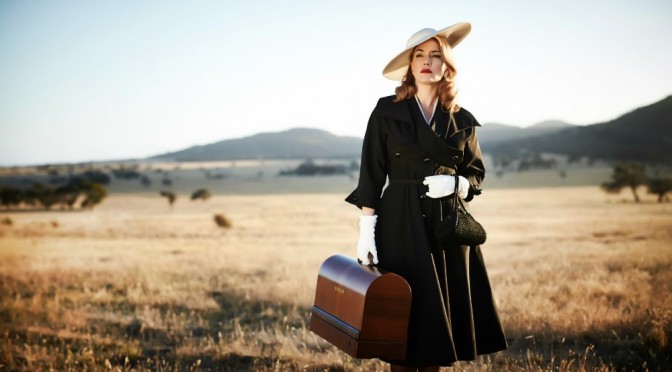 Director and screenplay writer Jocelyn Moorhouse described her film as, “Clint Eastwood’s Unforgiven with a sewing machine.” Unforgiven would go on to win four Oscars including Best Picture and Director. Jocelyn Moorhouse would no doubt hope the same for her first directed film in nearly twenty years after A Thousand Acres and her first Australian film in nearly twenty five years after Proof, which caught Hollywood’s attention.

Based on the 2000 novel by Rosalie Ham, and set in a small, rural country town in 1950s Australia, Kate Winslet plays the titular role of the dressmaker, Myrtle Dunnage, who returns home to take care of her mentally unstable mother, Molly, played by Judy Davis. END_OF_DOCUMENT_TOKEN_TO_BE_REPLACED 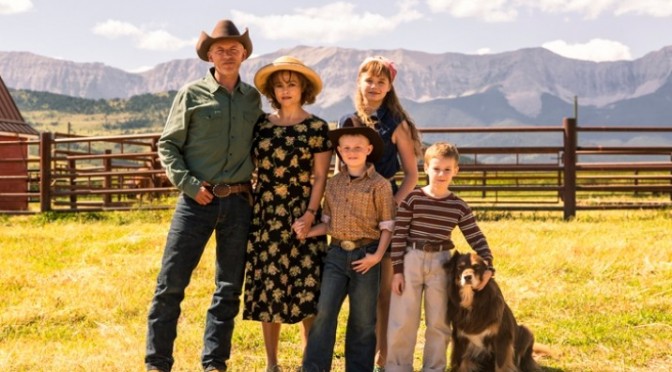 In THE YOUNG & PRODIGIOUS T.S. SPIVET, the director of Delicatessen does Disney. Well, sort of, maybe.

Don’t recall anyone in a Disney film dropping the F bomb! Still THE YOUNG & PRODIGIOUS T.S.SPIVET is very much a Disney echo being an amalgamation of Adventure, Frontier, Tomorrow and Fantasy, the lands inspired by Walt, and given full imaginative rein here.

T.S. Spivet lives on a remote ranch in Montana with his parents, his sister Gracie and his brother Layton. A gifted child with a passion for science, he has invented a perpetual motion machine, for which he has been awarded the prestigious Baird Prize by the Smithsonian Institution in Washington. He leaves a note for his family and hops a freight train to make his way across the United States and receive his prize. But no one there suspects that the lucky winner is a ten-year-old child with a very dark secret. END_OF_DOCUMENT_TOKEN_TO_BE_REPLACED