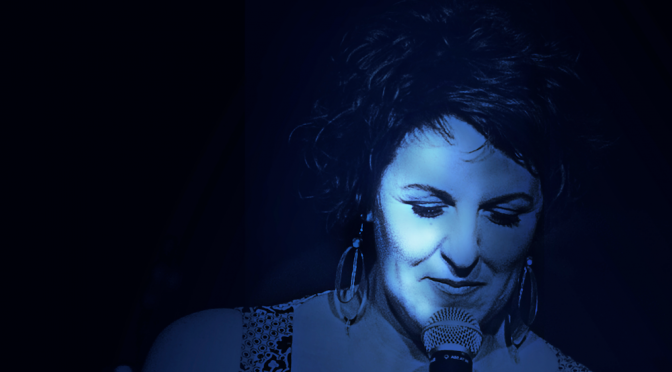 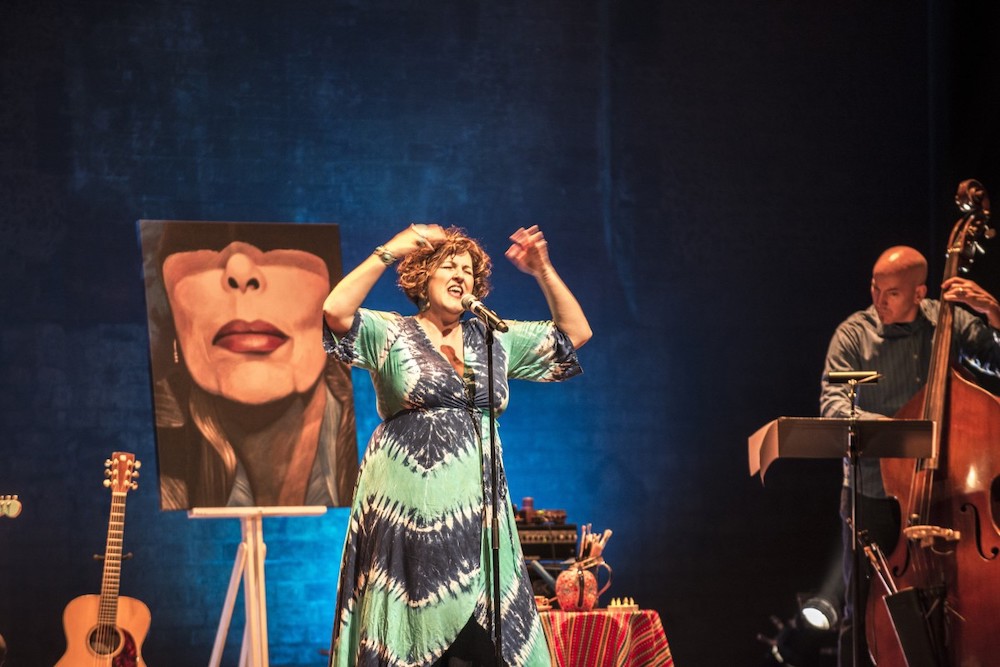 A concert featuring the wonderful songs of Joni Mitchell is sure to entice an enthusiastic audience to Parramatta’s busy and pulsing Riverside Theatre. Queenie van de Zandt delivers a polished and informative show to the appreciative crowd. An excellent trio comprising Hugh Fraser on bass, Gary Vickery on guitars and Daniel Edmonds on piano and stand in musical director supports Queenie. These talented musicians were a highlight of the evening and featured some delightful and entertaining arrangements. Queenie skill as a singer is impressive. She covers the extraordinary vocal and dynamic range required for Joni Mitchell’s songs although in a different style than the passionate folk music reflectiveness of Joni. Her style of singing and warmth suits the cabaret and storytelling format of the evening.

Queenie opened with ‘Blue’, one of Joni Mitchell’s great love songs that appears on her album of the same name. The album ‘Blue’ features on various lists as one of the greatest albums of all time so it almost selects itself as a song to include in the show. This raises the difficult question what songs should be included in a performance showcasing Joni Mitchell songs. On Joni Mitchell’s website there is an article listing the thirty greatest songs of Joni Mitchell. It acknowledges that this a subjective list and is assembled with assistance from Roger McGuinn, Matthew E. White, Graham Nash, Linda Perhacs, Mike Heron and others. David Crosby was asked to pick a best song and said that there are thirty or forty best songs. END_OF_DOCUMENT_TOKEN_TO_BE_REPLACED

Rainee Lyleson is one of those multi-talented young performers- she is an actress, singer and musician- who is always on the move.

Rainee recently completed her role as Juliet in Impulse Theatre Company’s vibrant production of ROMEO AND JULIET at Newtown’s King Street theatre.  Interestingly, her mother- Lisa Peers- was also in the cast, playing Juliet’s Nurse. At our Bondi meeting she told me how she was the third generation in a row of actors in her family.

She is now well into rehearsals for her latest production, her tribute show, ‘TAKE ME AS I AM, An Evening with Joni Mitchell’, which she will she perform for one night only, next week at Surry Hills’s 505 Venue.

“My father came into my bedroom when I was thirteen years old. Excitedly he handed me a new record, Joni Mitchell’s ‘Court and Spark’. He said, ‘Rainee, I think you are ready for this now’. He was so right. I was hooked on Joni’s music  through my teen years and have been ever since. Joni turns 70 this November and I wanted to honour a true artist.”

Rainee has been touring her Joni show for the last year, giving some 8 performances, including an East Coast tour that took her up to Byron Bay. This is her first city gig.

Rainee will be coming on to the 505 stage as the great Canadian Lady of Song. With her petite looks she passes easily for Joni. She has spent a lot of time researching her role, and will appear in character. There will be repartee between songs, with little background stories to the songs, many of which were about the particular man that was in Joni’s life at the time. They were celebrated figures in their own right, including Graham Nash and James Taylor

The show will play out in two sets. First set will be acoustic, with Rainee playing guitar and dulcimer, and will feature a lot of Joni’s early material, in particular, her much critically lauded BLUE album, which even Bob Dylan gave a nod to with his song, ‘Tangled Up in Blue’, from another legendary album, ‘Blood On The Tracks’.

After interval, the second bracket will focus on Joni’s move towards more jazz style music and will conclude on the note of another classic album, ‘Heijra’. Rainee will be supported by a funky band that she has got together that will include drums, bass, piano, guitar and harmonica.

Joni Mitchell hung up her guitar a long time ago. Her last album of original songs was released in 2007. Now her focus is on paint brush and canvas, an artform that she has always appeared to be more at ease with.

Rainee Lyleson will give her concert TAKE ME AS I AM: An Evening with Joni Mitchell at Venue 505, 280 Cleveland Street at 8.30pm on Thursday October 3. Bookings- trybooking.com.

We have to get ourselves back to the garden.”

A trip down Memory Lane to a more  idealistic time…I can’t wait…Maybe see you there?!