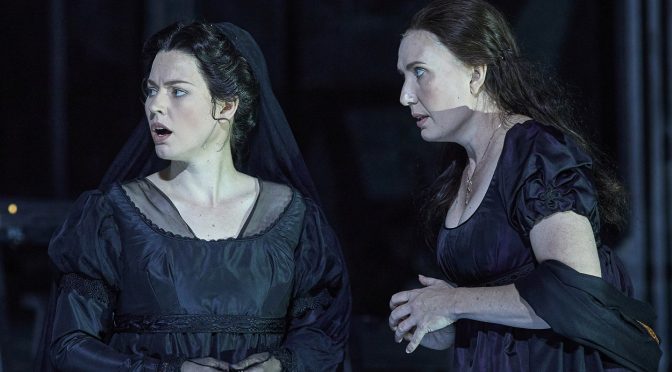 This is a magnificent revival of the chilling , thrilling David McVicar production.

As the audience enters, the curtain hangs almost as if partly torn down. Eventually it rises to reveal Robert Jones’s huge ash grey set that makes the stage look much larger than it is. It is supposedly a disintegrating palazzo, looking bombed out and with rubble everywhere with marvellous use of perspective. The set is also dominated by a giant staircase that rises and or descends dramatically allowing for further locale changes.

David Finn’s lighting is also integral to the show .

The atmosphere is bleak and gloomy and the production has been shifted time wise to the Romantic/Gothic era , just before the hypocrisy and rigid values of the Victorian era.

Musically the Orchestra led by maestro Xu Zhong was in glorious form and we heard a vocal feast as well.

In Mozart and Da Ponte’s opera about the Don Juan legend we see the anti hero, cad, hedonist more than serial seducer unpunished in this life until he finally meets his chilling just desserts .It is about morals and revenge and also forgiveness.

Luca Micheletti lives and breathes the eponymous mad, bad and dangerous to know role of Don Giovanni in a riveting, stellar performance .He is full of narcissistic machismo and can’t understand a woman saying ‘ no’ . He just takes what he sees and wants, and he is always the one to put things in motion. His delicate seductive aria in Act 2 to Donna Elvira’s maid Deh, vieni alla finestra , had the audience swooning.

Tall, gangly Shane Lowrencev was dynamic and energetic as blundering, bespectacled Leporello, the Don’s servant ,who sort of acts as Everyman, appalled by the Don’s amoral blasphemous and dangerous actions. While he is a ‘good’ guy ( well , mostly) but in some ways he wants to be bad just like the Don. His Catalogue Aria was a joy.

Donna Anna , the Commendatore’s assaulted daughter, portrayed by Eleanor Lyons, was accomplished in tone , singing at times with fierce intensity and at others great delicacy.. ‘Or sai, chi l’onore’,  her revenge aria, was refined and passionate .

As Donna Elvira,  Jane Ede gave a finely nuanced performance that was meticulous, from when we first see her in disguise as a man to her last attempts to return to and try and save Don Giovanni. Her ‘Mi tradi quell’alma ingrate’ in Act 2 was poignant and luminous.

Anna Dowsley as Zerlina, tall, blonde, beautiful,  fresh and innocent,  an enchanting mischievous bride on her wedding day was in imposing form. Her ‘Batti Batti ‘attempting to reconcile with Masetto was lilting and luscious.

Richard Anderson as Masetto , Zerlina’s brand new husband rather bullies and tries to control his wife – we mostly see his temper rather than his kindness , and how he has to ‘know his place’ when confronted by his betters.

The Commendatore, Donna Anna’s father, was given a thrilling chilling performance by Gennadi Dubinksy with hugely commanding stage presence as his statue come to life towards the end. The penultimate scene when he invites the Don to supper and drags him down to Hell , with the ash grey ghostly dancing ghouls,  is petrifying .