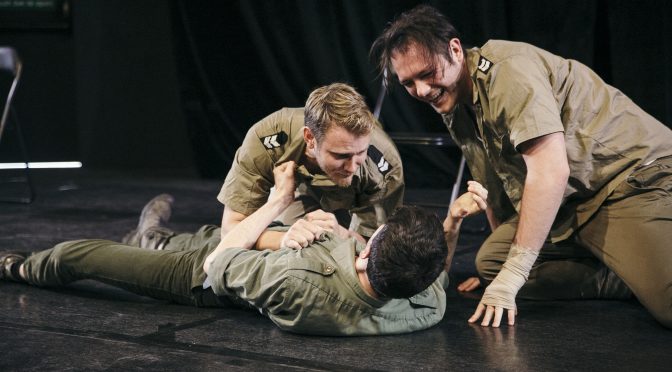 “WARNING: May involve dance, glitter and boys being boys.” says their Facebook events page and yeees, THE SWANMAIDENS does indeed have all that but more, much more and one very special, unique, exciting other thing.  The show has now finished its run at the Sydney Fringe but with luck we can expect more from new company Hunter & Sammler, this team and writer/director Luke Yager.  Because this was a cracker of show.  It was a fiercely male and ferociously sensitive production with mystery, great audio and performances that really bite the bullet.

We meet four men in worn khaki attire when they respond militarily to an urgency of klaxon call and red pulse with the violent donning of wall mounted gas masks and the aggressive waving of simulated weapons.  This, after a preshow bassy surround vibration on the audio track that really does your head in and after we have seen one of their number, a lost, broken boy surreptitiously hiding a big cardboard box.  It’s a wildly intriguing opening.  Sharing too much about the plot might spoil the enjoyment of a remount of the show, so suffice to say that these are men alone who will embrace swans and Tchaikovsky in an act of rebellion. END_OF_DOCUMENT_TOKEN_TO_BE_REPLACED