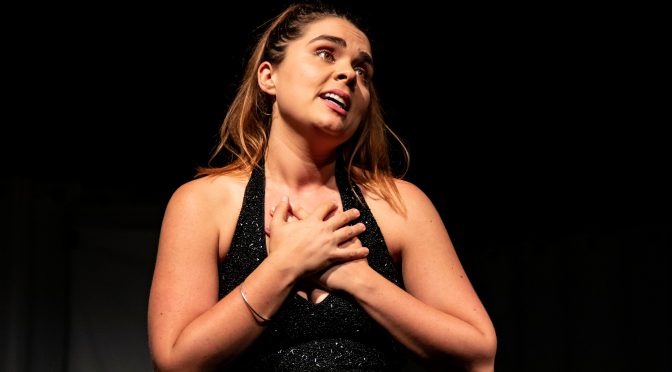 American playwright Neil LaBute’s ‘The Shape Of Things’ is a formidable play. It is reminiscent of the play ‘Oleanna’ by fellow American playwright David Mamet. Both plays are like lightning bolts. Both pivot around a fierce, vindictive, savvy female protagonist.

In ‘Oleanna’ the protagonist is Carol, a university student who goes to see her Professor, John in his faculty room in the hope that she will get a better mark for the paper she has submitted. Their meeting starts in a convivial way but then becomes more heated, ending up spiralling out of control and encompassing subjects far broader than one single essay.

In Neil Labute’s ‘The Shape Of Things’ the protagonist is Evelyn, a  feisty, radical young woman doing her Masters degree in Visual Arts. Evelyn sets her sights on timid, conservative Adam who is an arts undergraduate.

They meet at an art gallery. Evelyn has come to the gallery with a spray can, intending to deface a painting. Adam, the security guard on duty, catches her before she has had a chance to begin. They start chatting. Adam has a laid back attitude to her unruly behaviour, and  is oddly drawn to it.

For Adam it is the beginning of an exciting adventure. Evelyn starts turning his life around, organising new clothes, new haircut, new glasses. From being something of a schmuck Adam is transformed into a confident young man.

Adam can’t wait to introduce Evelyn to his best friends, a couple, the high spirited Phillip and the delicate Jenny. It is so important to Adam that they like her. At first they are impressed by Evelyn and how she is changing Adam but soon express their concern that Evelyn is too domineering.

The current revival of Labute’s 2001 play has been co-directed by Les Solomon and Rachel Marley.  Their production does the play justice. They also ensure that the play’s dark humour comes through.

Solomon and Marley win good performances from the cast whose passion for the play is clearly discernible.

Georgia Brindley portrays Evelyn as an icy, narcissistic, cruel woman who suffers from tunnel vision and only cares about her own path.

Samson Alston plays Adam as a man in a kind of paralysis, not knowing which way to go. Does he dive further into the new identity that has been created or does he jump off whilst he still has vestiges of his original self to claim?!

Olivia Hall Smith’s Jenny is very emotional and delicate, fraying at the edges as the play gets ever darker.

‘The Shape Of Things’ is a rich, immersive experience. One is left with so many talking points. To name but a few…How much of our identity is of our own creation and how much is how people see us? What qualifies as art and what is  self indulgence? The interplay of life and art and how unhealthy it can become when common sense vanishes.

I left the theatre with the Irish band The Corrs song ‘Everybody Hurts’ in mind.

“When your day is long

The night is yours alone

When you’re sure you’ve had enough of life

Yes, the play is about hurt, but this is a  portrait of inconsolable hurt

Well worth a visit, Lambert House Enterprises production of Neil Labute’s ‘The Shape Of Things’ is playing the Flight Path Theatre, 142 Addison Road, Marrickville until Sunday January 31.. Performance times Tuesdays to Saturdays at 7.30pm plus Saturdays at 2pm. and Sundays at 6pm. http://www.trybooking.com/BMUXN

Featured image Georgia Brindley as Evelyn in Neil Labute’s ‘The Shape Of Things’.