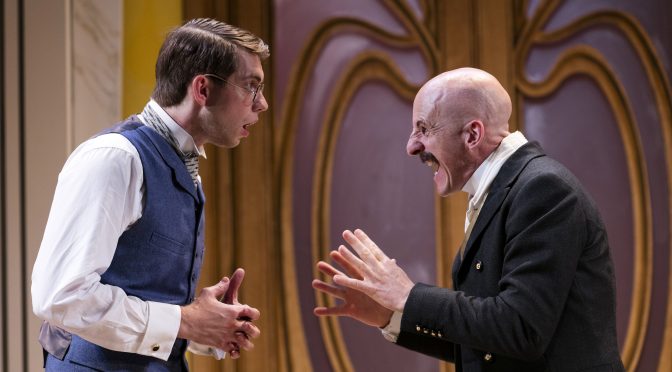 French farce at its best via Georges Feydeau’s A FLEA IN MY EAR is currently entertaining audiences at the Sydney Opera House.

Feydeau take us into the world of the the sophisticated, promiscuous French middle class who, on one hand, are doing some serious bed hopping and, on the other hand, are trying to catch their partners out with their infidelities.

The tagline for this Sydney Theatre  Company production  is ‘Let the famously french fun begin’ and that exactly describes how director Simon Phillips and adaptor Andrew Upton’s play it for the romp that it is – for lots of laughs and with great energy. The style is irreverent, in  particular in the ‘digs’ it has at the dour, solemn approach that some theatremakers have. As one characters says at one time, ‘It’s just a play’…Yes, that it might be, but it sure makes for good entertainment.

The  cast is outstanding, their timing and finesse around what is at times a tricky stage impeccable. Favourite performances came from Harry Greenwood  as the harassed, fraught Camille Chandebise and Harriet Dyer as  Raymonde Chandebise.

Production values are excellent. This is the perfect play for a revolve set and Gabriela Tylevsova’s ornate set works a treat as does her exquisite period costumes.