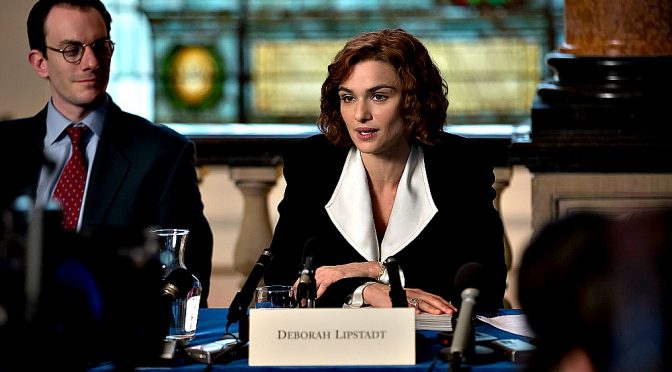 Denial,  a gripping drama based on one of the most fascinating courtroom battles in modern history, has been selected to open the 2016 Jewish International Film Festival across Australia.

Directed by Mick Jackson (The Bodyguard, L.A. Story) with a screenplay by David Hare (The Reader, The Hours), Denial stars Academy Award® winner Rachel Weisz as Professor Deborah Lipstadt who was sued for defamation by author and self-proclaimed historian, David Irving, played by Timothy Spall,  for being referenced as a ‘denier’ in Lipstadt’s book, Denying the Holocaust: The Growing Assault on Truth and Memory. Aided by a first-class legal team, helmed by a brilliant, yet maverick barrister, Richard Rampton (Tom Wilkinson), Lipstadt was tasked with proving that the Holocaust did happen in order to discredit Irving and clear her name.  Denial, which had its world premiere at Toronto International Film Festival, will screen courtesy of Entertainment One.

Approaching the Holocaust from a different perspective is The Last Laugh, a provocative documentary that will screen on Closing Night.  Director Fearne Pearlstein looks at taboos and comedy and in doing so asks ‘how far’ comedy should go when delving into tragedy.  Acknowledging that comedy can play a cathartic and ultimately healing role, this insightful film examines the issue via comedic titans such as Mel Brooks, Carl Reiner, Rob Reiner, Larry Charles, Sarah Silverman, Louis C.K., Chris Rock and the late Joan Rivers, along with survivors of the Holocaust including 91-year-old, Auschwitz survivor, Renee Firestone.

Complementing these two remarkable films will be 66 international premiere features and documentaries showcasing the cinema of 19 countries, including the globally fêted Israeli drama, Sand Storm, winner of Best Film and Best Director at the recent 2016 Ophir Awards (Israeli Academy Awards). This Ophir triumph automatically qualifies Sand Storm to be Israel’s submission for Best Foreign Language Film at the 2017 Academy Awards® and marks the first time that a film entirely in Arabic, rather than Hebrew, will represent Israel.

Sydney Arts Guide has ten in season double passes to giveaway to the Festival. Be one of the first to email the Editor on editor.sydneyartsguide@gmail.com with JIFF competition in the subject heading.  Winners will be advised by email. Passes will be sent in the post so please provide a postal address.