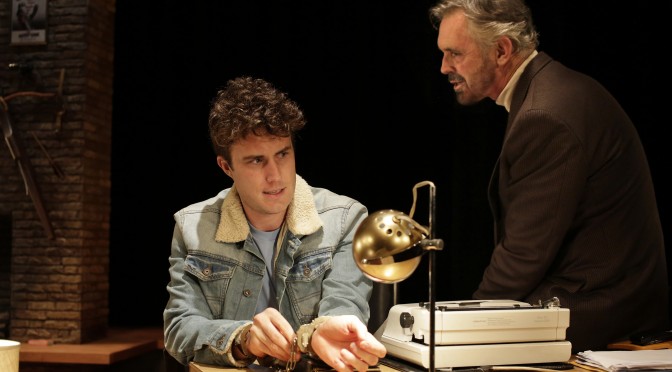 Devilishly dramatic and fiendishly funny, DEATHTRAP is a sure fire entertainment for those who like their fireside thrillers.

Written in the late Seventies by Ira Levin who should be quite apt at matters diabolical, being the author of Rosemary’s Baby, Darlinghurst Theatre Company’s production sets the situation in that era which gives it a cosy nostalgia, being the time of typewriters, carbon paper and Xerox machines.

DEATHTRAP is a play within a play and plays fast and close with the conventions of the mystery whodunit associated most immediately with Agatha Christie.

The very title alludes somewhat to the long running phenomenon that is The Mousetrap, although DEATHTRAP is a much more sophisticated example of the genre more akin to Anthony Schaffer’s Sleuth, which gets a mention, once or twice, in self-referential drollery.

This production headlines Andrew McFarlane as the playwright, Sidney Bruhl, a celebrated scribe on the brink of bankruptcy, both material and intellectual.

As a master of the mystery play, he is confronted by upstart new kid on the theatrical  blockbuster block, Clifford Anderson, played with dash by Timothy Dashwood, and the double temptation of perfect plagiarism facilitated by the perfect murder become palpable.

This applecart of chicanery is capsized by a clairvoyant from the land of clogs, a deliciously comedic turn from Georgina Symes.

Michael Hankin’s set is a triumph of Seventies chic, a stone den with flued fireplace and a trophy wall, a veritable arsenal of antique armaments.

Verity Hampson’s lighting design is adept and Katren Wood’s costume design nails the tans, beiges, and tawnies of the time.

Composer and sound designer Marty Jamieson totals the timbre and timing of the piece and the whole comic carnage caper is capped by Jo Turner’s cantering to a gallop direction.

Sharp shocks, twists and turns, GBH and ESP – this DEATHTRAP is worth getting caught in.

DEATHTRAP is  playing the Eternity Playhouse, 39 Burton Street, Darlinghurst until the 10th May. Performance times Tuesdays to Saturdays at 8pm and Sundays at 5pm.