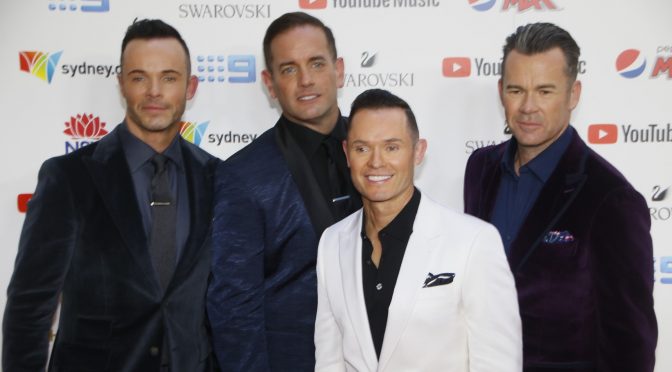 The 2019 Aria awards saw the quartet ‘Human Nature’ being inducted into the Arias Hall Of Fame.

The Red Carpet that preceded the induction ceremony and the presentation of awards saw the majority of women opting for glamour and style whilst some of the men opted for the punk rocker style, often associated with contemporary popular music.

Jessica Mauboy stepped out onto the Carpet with her partner, the Veronicas-Lisa and Jessica Origliaso– made a welcome return to the Media Wall snd there was a surprise appearance by the television puppet Aggro carried by his producer Jamie Dunn whilst Matt Okine and Alex Dyson carried on their annual tradition of wearing silly costumes.

Guy Sebastian hosted the Arias and won two awards himself. Other winners included the Teskey Brothers, Morgan Evans, with a special award going to veteran music entrepreneur, Michael Chugg, who won the Aria Icon award, for his promotion of Australian music.

Paul Kelly added the ARIA for Best Adult Contemporary Album to his Fine Art ARIA for Best Classical Album which he shares with James Ledger.

The big winner, however, was ‘Tones and I ‘who won four Aria awards.

Toni Watson was busking in Byron bay a year ago when she decided to put a few of her tunes including ‘Dance Monkey’ on . the internet.

‘Dance Monkey’ went viral and hundreds of thousands downloads worldwide made her an instant star.

Who knows who will be the big stars of next year and who will be inducted into the Aria Hall Of Fame?!