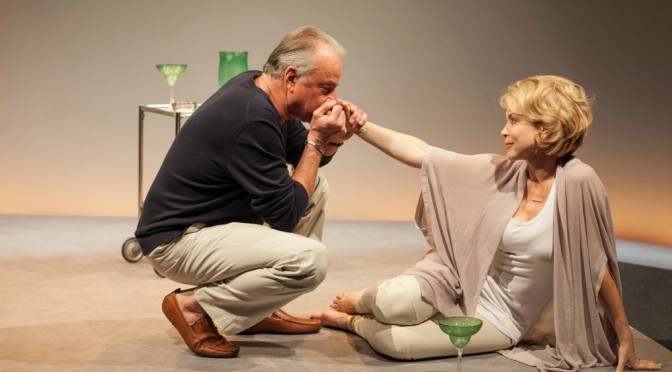 MY ZINC BED, by award-winning and provocative playwright David Hare, made its debut at The Royal Court Theatre, London, in 2000. Its carefully crafted eloquence and finesse continues to attract audiences.  Mark Kilmurry’s current production is vibrant and funny with an appropriate underlying sadness throughout.

Husband Victor Quinn is a masterful raconteur whose colourful past had its roots in the communist party, at one time greatly popular with intellectuals and philosophers.  His transformation over the years brings him into the corporate world as a highly successful founder of an IT company.  Despite this success and wealth, Victor has not lost his penchant for the less fortunate and vulnerable.

Sean Taylor gives a magnificent performance as Victor, charismatic and complex, brimming with the relentless ability to win an argument, which can lead Victor to play dangerous games. END_OF_DOCUMENT_TOKEN_TO_BE_REPLACED 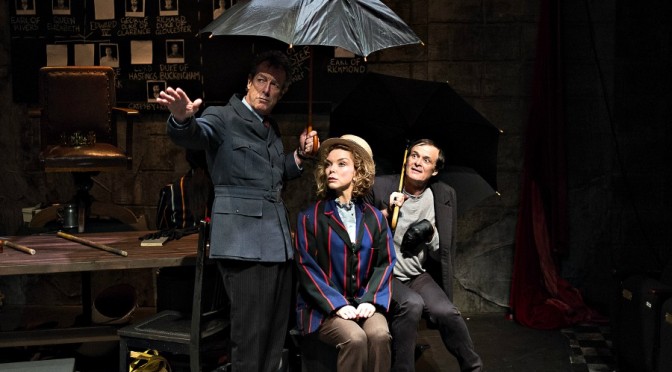 With nods to both the legendary Olivier and the McKellan versions, this is an extraordinarily beautifully spoken version of Shakespeare’s play, but I am afraid it just falls short of the mark. You can certainly see what this production is attempting to achieve, however it still leaves us feeling a little emotionally uninvolved.

This is a pared back abridged version with cuts, and many of the cast playing several different characters as required throughout the play, which can be a little confusing.

This production, directed by and starring Mark Kilmurry, is framed as a dangerous act of theatre, in which six players gather in a dark, sparsely furnished bunker to perform Shakespeare’s Richard III. There is a sense of suspense, of wartime desolation, of destruction.

Barely acknowledging each other upon flurried arrival, the cast set straight to work ,at first rehearsing short, key snippets of scenes, the sword fight in particular. Costumes, props and a set of benches, a table and dead TV sets have already been assembled. Kilmurry straps on a hump, picks up his gloves, assumes the now stereotypical gait and a clandestine performance begins, rather quietly and at a nervous pace.

What then develops is a sturdy presentation of an abridged text, occasionally interrupted by the menacing sounds of barking dogs, loud bangs on the door (which is monitored via CCTV) and patrolling helicopters overhead, all adding intensity and suspense, in what is a highly stylised production.

The cast speak in a broad range of accents, that dip and change as characters and alliances change.

The abridgements work well, as do some deft touches of theatrical shorthand – taking glasses on and off to demonstrate a quick-change between multiple characters played by a single actor.

Some key set piece moments do not really catch fire and we feel little for Clarence (Matt Edgerton) as he hurtles towards his death. Also the build up of circumstances towards Bosworth Field is rushed through and barely indicated.

As King Richard III, while beautifully spoken and with a very expressive face, Mark Kilmurry portrays him as shallow, calculating and manipulative rather than darkly villainous, and it is hard to care for him.  The King’s wooing of Lady Anne is played straight and with plenty of feeling. This is in contrast with some of the set piece/famous monologues which did leave me unmoved.

Danielle Carter of the exquisite alabaster skin was tremendous as Queen Elizabeth and Prince Edward. I liked the effect for the Princes in the Tower of having them in brightly striped, very posh school blazers and boaters, but it also in some ways made them look like a vaudeville act.

Patrick Dickson as Buckingham gives a strong, splendid performance. Matt Edgerton is terrific in his many roles as assorted characters. Amy Mathews was most impressive.

At the finale, Kilmurry pauses for a tense, dangerous moment. He looks at the crown. He then drags on his coat. The ominous helicopter sounds increase in volume and appear to be coming much closer. He grabs a piece of chalk, defiantly writes the date, hurriedly scribbles ”Richard III” and vanishes out the door. They were there and this performance happened.  We, the audience, were with them.

Running time – roughly 2 and a half hours including one interval.

”RICHARD III” runs at the Ensemble until July 19 and then transfers to play at the Parramatta Riverside theatre between July 22 and  26 .

Anna Crawford’s production of Alan Ayckbourn’s laconic comedy ‘My Wonderful Day’ is a well crafted and performed night at the theatre,

‘My Wonderful Day’ features two black actors in leading roles. The scenario sees a nine year old black girl Winnie Barnstairs (Belinda Jombwe) take a day off school and accompany her heavily pregnant mum Laverne (Shareena Clanton) to work. Laverne is cleaning the house of a cantankerous television personality, Kevin Tate (Mark Owen-Taylor), Laverrne tells Winnie that she must be quiet and do her homework, which is to write her essay/journal that she entitles ‘My Wonderful Day’.

Life in the Tate household is far from serene! Tate is a difficult man whose life is made more difficult by  his BAFTA award winning wife Paula (Danielle Carter) having left him. His ditzy secretary Tiffany comes to his aid and things are more than a little chaotic.

A sweet natured young girl, Winnie is also bright and astute, and as the day unfolds, with director Anna Crawford, (an Ensemble theatre director’s fellow), flashing the changing times on the back wall, Winnie witnesses the adults’ comical, and at times, irrational behaviour first hand. Winnie will never look at adults in quite the same way!

‘My Wonderful Day’ runs straight through for ninety minutes without interval. Typical of Ayckbourn’s plays, as ‘dramatic’ as the action is, the playwright’s trademark one liners are interspersed through the play with lines such as ‘I married an angel/ I divorced a monster’, and the young Winnie with her ever present pen and exercise book is jokingly portrayed as a young Emily Bronte.

The roles are neatly played. Mark Owen-Taylor is well cast as the highly strung, comical Kevin Tate. As Paula, Danielle Carter makes a major impression in a scene where she discovers infidelity.  Shareena Clanton gives a warm performance as the good natured, hard working Laverne and has a funny, chaotic scene where her waters break in the living room. Young actress Belinda Jombwe plays something of a leading role as Winnie who is trying to discreetly fathom what’s happening. Belinda’s timing is first class. Matilda Ridgeway gives a typically assured performance as the ‘accomodating’ secretary. Brian Meegan plays Kevin’s gregarious mate who tries everything to protect him.