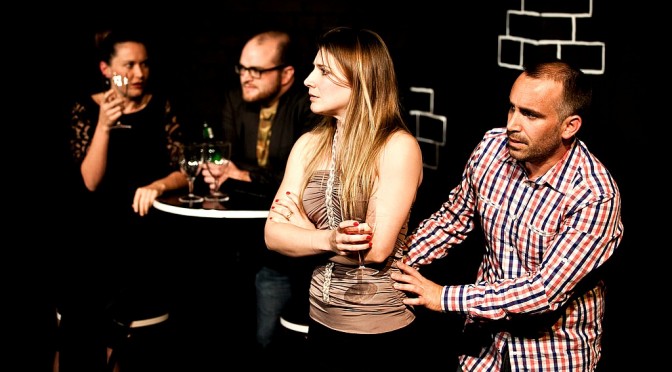 “There’s a new world that both compliments and conspires against our own – the digital world” says writer Paula Noble, describing a ‘key stroke’ for a very noble effort that opened at the Old Fitz last night. While Director Steven Tait hopes that “audiences leave the Old Fitzroy, not simply satisfied with an enjoyable theatrical experience, but with the basis for starting a new conversation with each other.”

As you’ll see in the program notes, Brad has relinquished a torturous relationship with control freak wife, Maggie and prompted by best friend ,Grub, ‘checks in’ on Facebook to find new relationships. He doesn’t have to wait long as Di, a rather ravishing and predatory (and attached) blonde bombshell ‘explodes’ on the scene looking for mischief, followed inevitably by her menacing, jealous husband who is actually not far of the mark, (literally when he tries to rearrange Brad’s face!) Rebecca, a young ‘old flame’ (also attached), who’s never really got over being rejected by Brad, returns for a second tilt, and jilt! But current wife Maggie hasn’t accepted separation either and moves back in to re-stake her claim (or maybe Brad’s heart?)